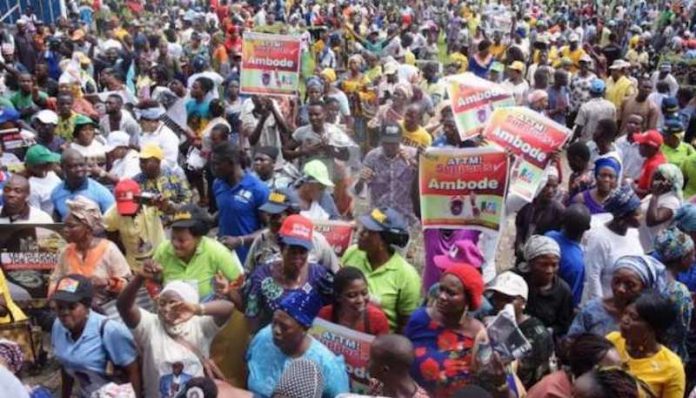 Some supporters of Governor Akinwunmi Ambode of Lagos State yesterday staged a protest at the state secretariat of the All Progressives Congress (APC) over what they called the party’s plan to manipulate the governorship primary to favour Mr. Jide Sanwo-Olu.

The News Agency of Nigeria reports that the protesters, numbering about 200, carried leaves and placards, expressing their displeasure with the electoral process.

Mr. Daud Olasheu who led the protest alleged that the party leadership had already compromised the process with the adoption of Sanwo-Olu, even before Tuesday’s primary.

Olasheu, Deputy APC Local Government Chairman in Somolu, alleged that the party was taking a number of other steps to ensure that Ambode did not win the election.

He said they were sure that Lagos residents wanted the governor because of his administration’s strides, and that he would win in a free and fair contest.

“We are here today, first to show solidarity with Governor Akinwunmi Ambode ahead of the primary and to say we are solidly behind him.

“We are also here to show our resentment over the partial role the leadership is playing in the process, especially with the endorsement of Mr Sanwo-Olu.

“We want to say the party leadership has already compromised the process, even before the primary.

“We do not believe in the process and we want the national leadership to do its best to make the primary credible,” he said.

Olasheu alleged that thousands of Ambode’s supporters were not issued the party’s membership cards to enable them to vote in the election.

According to him, the failure to issue the cards is a clear ploy to pave the way for the emergence of Sanwo-Olu.

He urged the National Working Committee of the party to take over the conduct of the primary and do its best to make the process credible.

NAN reports none of the state party officials addressed the protesters as they were busy meeting with NWC officials.

The protesters stayed till late evening while the meeting was ongoing, chanting solidarity songs in support of the governor. (NAN)