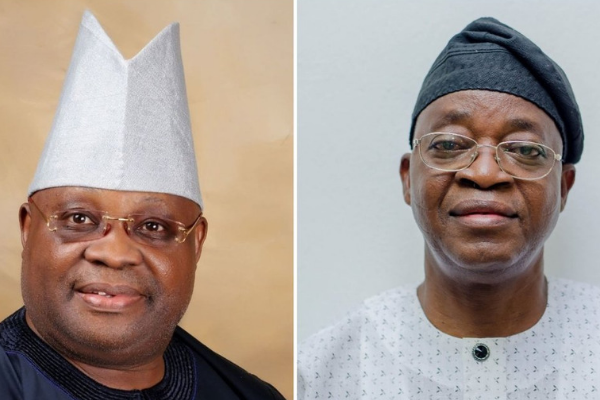 Alhaji Adegboyega Oyetola, the APC governorship candidate, had snatched victory from the jaws of defeat. Though he lost when the result of the election was first announced, but a technical issue due to the narrowness of the vote margin between him and the PDP candidate, Senator Ademola Adeleke ensured a supplementary election was done which resulted in him winning the election with another narrow margin of 482 votes.

When the supplementary election was called, majority of it was to take place in Omisore’s stronghold of Ile Ife. Like the beautiful bride, he was courted by both the APC and the PDP. He eventually pitched his tent with the APC, a situation which eventually ensured that the APC candidate won the election.

The performance of the Independent National Electoral Commission (INEC), in the Osun election was almost superlative. For the first time since elections were conducted in the country, election materials arrived in all polling stations before the voters; and electoral officials were ready. Also, all the card readers worked perfectly. At the end of the election, no INEC official was accused of conniving.

Although the supplementary election was strongly criticised, the earlier election held on Saturday September, 22nd, was judged as very well conducted.

With the election, the APC has again ensured that the South-west remains a stronghold of the progressives. With this victory, the party has shown that the geopolitical zone will once again, as it did in 2015, be the deciding factor in the 2019 election.

The election cemented his position as the political leader of the South-west. He would have been the most humiliated if the APC and Oyetola had lost the election as it would have signaled the decline of his powers.Tinubu had to personally re-located to Osun for the supplementary election to ensure victory for the APC.

It is a win-win for the dance loving Senator. He has proven that he is a factor to be reckoned with in the politics of the South-west. His performance in the election was a surprise to many. From an underdog, he has become a force to reckon with within a relatively short. He won the initial election but lost in the supplementary election.

The PDP is probably the greatest loser in the election. A win for the party would have bolstered its confidence. The PDP desperately needed a victory in Osun to tell the people it is still a force to reckon with.

The outcome of the election proved former Aviation Minster, Femi Fani-Kayado has no political value on the home front. Fani-Kayode never came home to campaign for his party; instead, all his campaigns were done on Twitter and Facebook where he was almost roundly mocked for not contributing anything towards a victory for the PDP.

There were 48 candidates in the Osun governorship election. This is the first pointer that all is not well in the polity in the state. At the end of the election, only four candidates made good impact while the remaining 44 a poor showing.

Ordinarily, Governor Rauf Aregbesola would have been the greatest loser in the election. The people blamed him for the poor performance of the APC. They accused him of having a disregard for the people, especially the workers. He practically took the people for granted. He neither mobilised his party men nor the people. His governing style and apparent distance from the people was beclouded by the believe that the people will always vote for the progressives.

He was shocked when he lost not only his ward,  his local government council and senatorial district to the opposition. But he was saved by the bell following the victory at the rerun. Will he remain in Osun or return to Lagos, where he is alleged to be behind the troubles confronting Governor Akinwunmi Ambode.

Security for the election was adequate and professionally handled, at least for the Saturday election. The security agencies would have gotten a pass mark for this but for their handling of the supplementary election in which they were roundly condemned by the media, election observers and some of the parties. They were accused of being partisan in an the election which they were supposed to impartial.

However, there was division of labour between the Army, who mounted the road block and the police who were stationed at the polling stations and saddled with the protection of election officials and materials. Unlike in the past, the people were never intimidated and there was synergy between the security agencies including the Department of State Security.