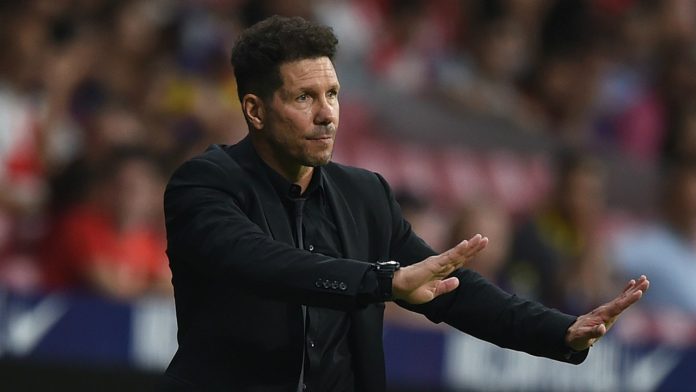 Diego Simeone described Atletico Madrid’s sluggish start to the season as a wake-up call but it was Real Madrid’s nightmare in Seville that threw a whole new complexion in today’s city derby.

Atletico were seven points adrift of the top of La Liga after drawing to Eibar two weeks ago, and it was not out of the question their rivals were loading up for a knock-out blow at the Santiago Bernabeu this weekend.

‘Atleti’ were staring at the possibility of a double-digit deficit which, even as early as October, would have been a big gap to close.

“This is a wake-up call,” Simeone said at the time. “It is the best thing that can happen to us.”

But after back-to-back wins Atletico come into Saturday’s game just two points behind Barcelona, who top the table on goal difference, and Real – who drew away at Athletic Bilbao before being hammered 3-0 by Sevilla on Wednesday.

“We are getting used to winning again,” said Atletico’s Filipe Luis, while Angel Correa added: “This is the Atletico we want.”

Some had put a line through Atletico a month ago but they will move above Real with a win – and could even go top if Barca’s dip continues at home to Bilbao.

What is clear is that neither Barcelona nor Real Madrid were as formidable as their early form suggested, while Atleti were perhaps undersold by their lumbering out of the blocks.

All three have shown they are fallible.

Real were torn apart in 39 first-half minutes at the Ramon Sanchez Pizjuan, which might have been marked down as a one-off were it not for Sevillacapitalising on the same counter-attacks Espanyol had attempted the week before but failed to exploit.

Atleti have also been wasteful up front. Antoine Griezmann has been indecisive, and Diego Costa is without a league goal since February.

There is also Griezmann’s recent spat with Real’s Sergio Ramos to add another layer of intrigue. Ramos dismissed the Frenchman’s suggestion he could do little more to win the Ballon d’Or. “Ignorance makes you bold,” Ramos said.

Perhaps the difference is Griezmann is yet to win the Champions League and in that regard, he shares the same ache as Barcelona, whose pursuit of success in Europe appears already to be disrupting their domestic rhythm.

Many Barca fans have still not forgiven Ernesto Valverde for last season’s quarterfinal collapse against Roma and chief among the complaints was his failure to rest key players.

This week he left out Philippe Coutinho, Ivan Rakitic and Samuel Umtiti against Girona and, albeit with 10 men, they drew 2-2. He left out Luis Suarez and Jordi Alba against Leganes on Wednesday, and they lost 2-1.

“Obviously it is easy now to talk about the rotations,” Valverde said. “In the end, matches are analysed on results – but you can’t win the league with only 11 players.”

Barca host Bilbao today, four days before facing Tottenham at Wembley and Umtiti’s suspension means one player he cannot leave out against Spurs is Gerard Pique, even if the defender’s error-count must be a concern.

Clement Lenglet is likely to replace Umtiti in London and could be given another run-out this weekend after being sent off against Girona.

Elsewhere, Sevilla travel to Eibar today while Valencia, still without a win this season, play away at Real Sociedad.