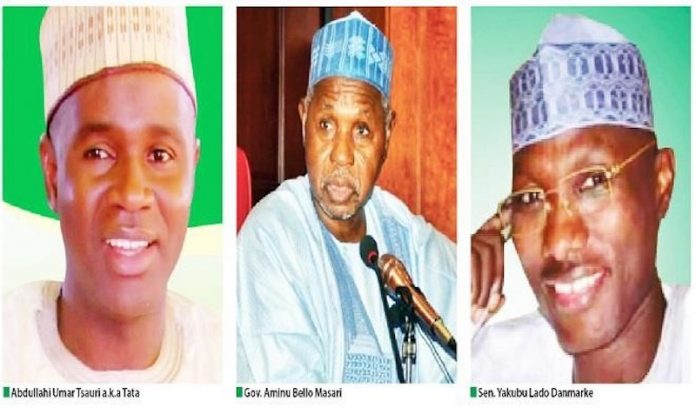 Five out of the six governorship aspirants on the platform of the Peoples Democratic Party (PDP) in Katsina State who purchased their expression of interest and nomination forms might decamp to other political parties over what they termed as impunity, THISDAY has learnt.

They are Umar Tata, Garba Faskari, Musa Natsuni, Aminu Yar’Adua, and Sada Ilu Kofar respectively.
A PDP chieftain, who pleaded anonymity revealed that they are set to leave the party over what they described as impunity and imposition of Senator Yakubu Lado Danmarke, who is the sixth candidate as the party’s consensus standard bearer for the 2019 governorship election.

The party on Monday night adopted Senator Yakubu Lado Danmarke as its consensus candidate for the 2019 general election following a mock election that took place at the party’s secretariat in Katsina, the state capital, with 34 Local Government chairmen of the party in attendance.

THISDAY reliably gathered that the decision of the party in the state to choose Danmarke as its 2019 standard bearer did not go down well with its members and might likely cause a mass exodus from the party.
The source said: “The five governorship aspirants are currently negotiating with other political parties to decide on which one they could pitch tent with”.

‘”This is high display of impunity by the PDP and certainly we are leaving. In the next few days, we shall tell you our new party and have definitely left the PDP.
‘”It is unfortunate that a party that should be settling down for a candidate that can pose a formidable challenge to the incumbent governor is busy foisting a political clown on the people’’

However, the state Chairman of the party, Salisu Yusuf Majigiri, has denied the claim, via a telephone chat, that the aspirants are decamping from the party, saying that any one making the allegation to the effect is speaking for himself.
“It is not true that any one has decamped, we have the papers they all signed to the effect you can come and see it or you can speak to
them individually to confirmed”, the PDP chairman explained.