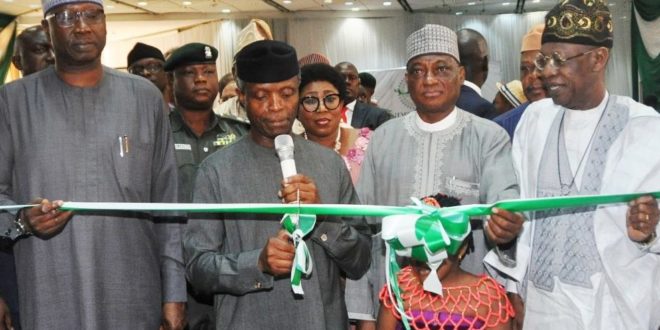 Photo Exhibition, tagged “The Footprints of Nigeria’s Political Leaders,” which was curated by the Federal Ministry of Information and Culture.

The Exhibition was declared open by Vice President Yemi Osinbajo.

The Minister of Information and Culture, Alhaji Lai Mohammed, said the 1st of October every year provides an opportunity to reflect on the nation’s unity, patriotism and commitment to nation-building.

“Today’s event commemorates Nigeria’s 58th Independence Anniversary celebration. There is no doubt that this day is special to every

Nigerian as it is a day to reflect on our unity, patriotism and commitment to nation building. Therefore, one cannot help but be excited as this day approaches annually.

”Over the years, the country has gone through trials and tribulations, but the 1st of October is always a day for celebration

and thanksgiving, because it occupies a very important place of pride in the political history of our country. It also serves as a poignant

reminder and appreciation of the “Labours of our heroes past,” he said.

“I wish to therefore use this opportunity to encourage all participants, especially the youth, to spend time to view and savour this significant and historical exhibition,” he said.

Osinbajo said the occasion would help Nigerians to recognise the incredible leadership provided by all the nation’s political leaders, from the colonial days to the present day, who have shown greater wisdom, wits and courage at all times.

Prof. Osinbajo said even though the event reminds Nigerians of the twists and turns in the nation’s historical journey, the present administration had resolved not allow history to determine the country’s future but only as the precursor to a greater Nigeria that is prosperous, united and treats everyone fairly and justly.

He said each phase of the nation’s political history had tested the resolve to remain united and maintain the integrity of the country.

Dignitaries who attended the exhibition included the Secretary to the Government of the Federation, Mr. Boss Mustapha; Minister of Defence, Brig.-General Mansur Dan-Ali (Rtd); ambassadors of France, Angola, Kenya, Brazil and Benin Republic, and the Director General of the National Gallery of Art, Mr. Abdullahi Muku, among others.