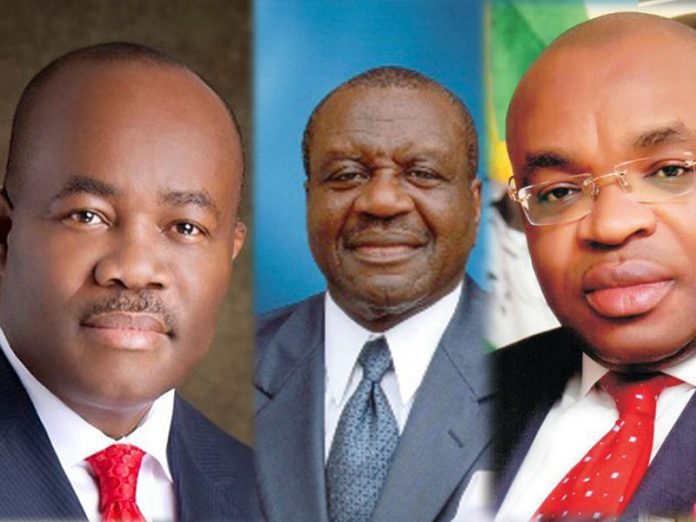 The race for Akwa Ibom Hilltop Government House between the PDP and the APC has gone a notch up with high stakes, writes Segun James

Since its creation 31 years ago, today (September 23, 1987) by the Ibrahim Badamasi Babangida regime, Akwa Ibom State has made huge progress in terms of physical and infrastructure development. Much of this growth was made in the last 20 years of democracy.

Also, much of the progress has been attributed to the works of former governor Obang Victor Attah, an architect, who is believed to have designed the state’s development master plan, which his successor, Mr. Godswill Akpabio built upon.

A first time visitor to Uyo, the state capital would find a city that is a beauty to behold – neat and serene. Right from the Ibom Airport to the city centre, there are numerous dual carriage ways and well-paved inner city access roads.

However, behinds these aesthetics are rots, which are disguised by the fine paints and outer structures. Most of the structures are empty shells. The worse is that all of these are buildings and structures constructed by the government of Akpabio, who couldn’t complete them by the time he left office.

It was Akpabio, who embarked on so many ambitious projects, which he couldn’t finish by the end of his tenure, but assumed that his handpicked successor, Governor Udom Emmanuel would help finish.

While Attah was systematic in his efforts in building the state, particularly the capital, Uyo into a modern city, Akpabio on his part was in a hurry to develop the state. That is the reason the state is dotted with many uncompleted projects, which he wanted Emmanuel to finish.

This is where, observers claimed the problem between Akpabio and Emmanuel began and today, this is the problem that Udom Emmanuel has had to contend with as the people keep asking: where are your own legacy projects?
Akwa Ibom is the richest state in the country outside Lagos State. It produces the highest oil quota in the country and collects the highest percentage of federal allocation and derivation fund. In fact, on the average, the state collects over N17bn monthly, an amount more than the entire allocations of the five states of the South-east.
Today, the question on the lips of the average Akwa Ibom person is what has Emmanuel got to show for his fours in office and over one trillion in capital allocation?

This is coming as his political mentor, Akpabio, has jumped ship to the opposition All Progressives Congress (APC) and has in concert with the former deputy governor of the state, Obong Nsima Ekere, been waging war of attrition against him. But will the governor be able to survive this onslaught? That is the question as events leading to the 2019 general election inch close.

Thus, in the last 20 years, Akwa Ibom has been blessed with three governors, all coming from the stable of the PDP. But will the 2019 election proved a change in the state as it was at the national level in 2015? This is the question.

Obong Victor Attah: 1999 – 2007
Attah is often described as the father of modern Akwa Ibom, because he designed the master plan for state and the state capital territory. He also was instrumental to the creation of the state and set in motion the building and rebuilding of Uyo, then an old provincial town into a modern metropolitan city. Among the numerous assets he built are the Central Business District, which consists of parks and business concerns in the center of the town.

The Ibom Airport was initiated by him and work on it was about 40 per cent completed by the time he left office. The airport was later completed by the Akpabio administration. Attah also built the Ibom Power Plant which today is connected to the national grid, and contributes to the electricity supply in the state. Akwa Ibom was one of the first states to build their own power plant.

The Ibom Hotel & Golf Course is the first five-star hotel in the South-south region. It has the largest golf course in West Africa. His administration also built some network of roads including Nwaniba Road, Edet Akpan Avenue, Nsikaka Eduok, Atiku Abubakar, IBB Avenue, and many others. In all of its eight years, the Attah administration earned about N900 billion

Godswill Akpabio 2007 – 2015
The Akpabio administration is credited with driving the rapid growth of the physical and infrastructure administration in the state. The administration earned about N3 trillion in eight years, and is credited with completing works on the Ibom Airport project. He built the Ibom Specialists Hospital; a multibillion naira referral hospital, which could have ranked as one of the best specialist hospitals in the country if it had been completed and equipped, but today, it is empty and has no patient on admission.

The Godswill Akpabio Stadium is today the home of the national team: The Super Eagles. This edifice is where international marches are being played in the country today. Unknown to many people, the stadium is yet to be completed. Akpabio also built the state owned e-Library, the resort centre, Tropicana Complex and the uncompleted and abandoned five star hotel, Four Point by Sheraton Hotel at Ikot Ekpene.

Udom Emmanuel
In the last three and a half years, Emmanuel said he has improved on agriculture in the state, having increased the hectares of land used for cassava plantation to 2,100 and coconut plantation to 11,000 hectares.
His Commissioner for Information, Mr. Charles Udoh and his Chief Press Secretary, Mr. Ekerette Udoh, said education in the state is free from primary to secondary school level while over 208 dilapidated schools out of over 800 in the state had been rehabilitated.

Besides, the state also pays over N600m yearly for all students in the state writing the West African Examination Council’s exams. This, Udoh said, has helped to increase the number of pupils going to school in the state. He also claimed that the state now owns the largest medical syringe manufacturing factory in West Africa, although an independent visit to the pharmacies in the state found none of its product in the market.

He also claimed over 20,000 youths had been trained in various skills as part of the government’s youth empowerment programme, even as 10 sports centres are under construction. There are also the pencil and toothpick factories and the Ibom Deep Seaport under construction among many other projects.

What are the Election Issues?
When THISDAY visited the state, it was found that Akwa Ibom people are worried that the Udom administration, which has earned one trillion in three and a half years, has not continued in the tempo and drive of the infrastructure and economic development of the last two administrations before it. This, in fact, is the problem that the state government has to contend with.

To them, what can Udom Emmanuel point to as his “legacy projects”? Where are the landmark achievements of Udom? Why neglect to maintain existing assets and why neglect the master plan and economic blueprint set by Attah? These questions are indeed at the root of the woes of the PDP led government.

A Peep into the Governorship Race
The governorship race in Akwa Ibom will be a straight fight between Emmanuel of the PDP, and Nsima Ekere, the Managing Director of the NDDC, who will be running on the APC ticket. Ekere is the leading aspirant among the six contestants in the APC.

The APC has been proving a capable opposition, especially since the defection of Akpabio to its fold. Since 2014, leading political leaders in the state led by Mr. Umana Okon Umana (the MD of Oil & Gas Free Zones Authority) and two serving senators have joined the party from the PDP.

In August, Akpabio also joined the party in an elaborate ceremony in Ikot Ekpene. Since then, thousands of PDP members from across the state had defected into the party, notably Akpabio’s former deputy, Mrs Valerie Ebe. She succeeded Ekere as Akpabio’s deputy. With Ebe’s switch, the key functionaries of the Akpabio administration from 2007-2015 are now in the APC.

“PDP is now on life support. It is only a matter of time, they will give up”, says Umana, who was the Secretary to the State Government in the first six years of the Akpabio era.
Akpabio’s entry into the APC has inflicted a psychological trauma on Emmanuel and the PDP. He was the face of the party both in the state and nationally. Since the defection, PDP is believed to have been considerably weakened by the continuous streams of defections of its members into the APC. The governor’s problem is being worsened by the fact that he did not nurture his own independent structures while Akpabio was with him.

Now that the governor does not only appear to be lacking formidable support, he doesn’t seem to enjoy the trust and confidence of the key people around him, most of who owe their prominence to the former Senate minority leader.
But again, the party has a lot to contend with if Ekere eventually emerges its candidate. Currently battling different corruption allegations, including a mismanagement of the NDDC, handing such a character the lever of power might be yet an even worse injustice on the people, pundits argued.

This is why many people in the state hold the view that they would rather deal with the devil they had always known than embrace the angel they cannot vouch for. Indeed, with this scenario, Akwa Ibom is not to be envied, but its dynamics would be an interesting watch in netx year’s election.