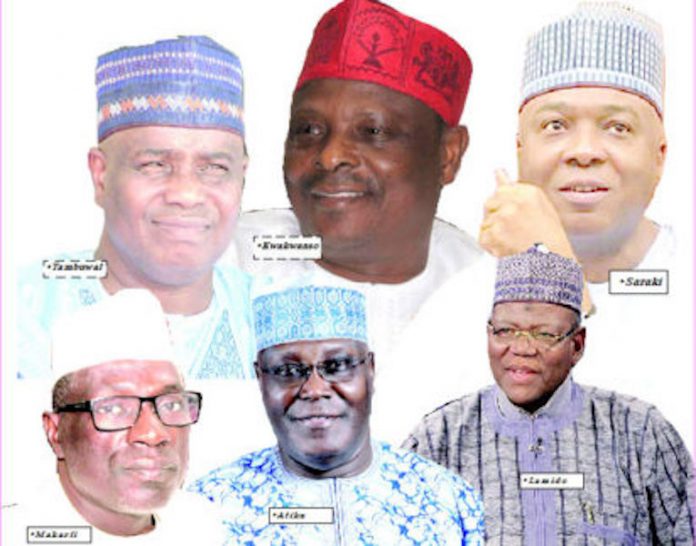 As the Peoples Democratic Party (PDP) recently flagged off activities ahead of the 2019 general elections in the country, the interest of about 12 presidential aspirants have forced the party’s Board of Trustees (BoT) to set up a committee that will pick a consensus candidate, writes Adedayo Akinwale

The National Working Committee of the Peoples Democratic Party (PDP), has since started sale of Expression of Interest and Nomination forms for its members seeking to contest various offices in the 2019 general elections, thus increasing the pace of political activities at the Wadata Plaza, the National headquarters of the PDP in Abuja as political office seekers come in on daily basis to purchase forms.

The party has directed all aspirants for Presidential, Governorship, Senate, and House of Representatives to purchase their forms at the national headquarters of the party in Abuja, while all aspirants for State House of Assembly elections are to purchase their forms at the national or state party secretariats. The party however exempted all female aspirants from payment for purchase of nomination forms for all offices except national ad-hoc delegate categories.

When compared with 2015 general elections, the main opposition party revised downward its fees. In 2015, the then ruling party pegged its presidential nomination and expression of interest form at N22 million in 2015, while that of governorship was N11 million . I
n 2015, the Senate was N4.5 million, while House of Representatives was pegged at N2.5 million. The House of Assembly was pegged at N1.2 million.
Political heavyweight jostle for PDP ticket

However presidential aspirants on the platform of PDP seem not to agree on a consensus candidate. While some think it is the best if an agreement could be reached, others think it will be undemocratic.

A former Speaker of the House of Representatives and Governor of Sokoto state, Aminu Tambuwal said that having a consensus candidate in the 2019 general elections was part of democratic process.

Tambuwal, said, “I can’t say there is no need for consensus; it is part of democratic process. If there is a possibility of it, why not? If it is not possible, then, we all go for the primaries. But I believe that PDP of today is capable of organising free, fair, credible and transparent primaries.”

Also, Presidential hopeful and former Minister of Special Duties, Kabiru Tanimu Turaki said that no agreement has been reached about presenting consensus candidate.

He said; “the position of the party is that the party is not forcing the aspirants to a consensus, the party just wants the aspirants to discuss among themselves. I cannot tell you on good authority now the position, because each aspirant has been coming here to pick the form. So that presupposes for now that there is no discussion amongst them for a consensus, otherwise only one person would have probably picked the form at this stage.”

On his part, the former governor of Sokoto State, Attahiru Bafarawa, vehemently opposed presenting consensus candidate, saying it is undemocratic.
He noted; “I think you people are not interested in democracy. If we are talking of consensus at least we are players. I expected you to be a good watchers of the playing ground so that you can see how the game is going to play. If we say that we are going for consensus, what are we going to do with it? We agree we are all brothers. We see it as a game.

“Therefore, if anybody is interested in withdrawing himself from the race, it’s a welcome idea. But talking of consensus you are going to fall like APC where we are going to have a one-man show.

“We don’t want to go for one-man show. We want to practise democracy so that people will choose their own better candidate. For example, if APC is playing democracy, they will allow an least three to four aspirants to aspire for the position. But because the party is a limited liability company while PDP is a public limited company, it is welcome by everybody,” he noted.

The opposition party appears to have learnt some lessons having been out of power for more than three and half years. It has insisted that it won’t force a consensus candidate on the aspirants.
The party has also assured that the process of picking a candidate for the party in the forthcoming election will be free, fair, credible and transparent.

In a move to avoid post primary crisis that may lead to party implosion, the PDP Board of Trustees (BoT) last week met and barred its members from campaigning for any presidential aspirants on the platform of the party.
The BoT Chairman, Senator Jibril Walid revealed that the board was working to ensure that it reduces the increasing number of presidential aspirants but noted that it would not force any aspirant from stepping down.

He stated: “If you are a member of BoT, you remain as a member of BoT and conscience of the party. They should not move about with any aspirant. If we are really conscience of the party, we should not move about with aspirants. That was what happened during the last national convention when we elected the National Chairman. Some of us went and pitched camp with aspirants, taking them all over the place.

“This time, we will not allow that to happen. Anyone of us who moves about with any aspirant should resign from the BoT. We are the one that will settle the complain. But if we are involved, it will not be fair. So we have told the members not to campaign with the aspirants; we are also the delegates.,” the BoT chairman said.

Walid also revealed that the BoT also deliberated on the current situation in the party as regards the increasing number of aspirants, while recommending that the situation should be well managed in order to avoid crisis.

He said; “The presidential aspirants are 13, we are trying our best to ensure that the number is reduced. But we are not forcing anybody. More consultation going among the elders. We are going to bring out a committee that will be best for Nigerians. We are forming a committee to meet with the aspirants. After that we will decide on what to do. We have decided to form a special committee to advice the NWC.”
The BoT insisted that there should be free and fair elections during the forthcoming primary and there should be no impunity, and no godfatherism.

The BoT earlier in the week revealed that it has set up a 12-member committee to discuss with the party’s 13 presidential aspirants, with the view to picking one of them as consensus candidate.

Though the BoT refused to reveal the identities of the member of the committee.
The Chairman of the BoT confirmed in a text message that the committee would impress it on the aspirants the dangers inherent in having such a large number of them in the race.
Jibrin who admitted that the present number of aspirants was complex, saying that there were fears that there could be disagreement among the contestants that could lead to major divisions after the primaries.

He stated: “A committee has been set up to discuss with all the aspirants to come up with one of them as a consensus candidate. We have 13 of them in the race. We have also advised the leadership of the party to regulate the processes and draw a code of conduct to guide the conduct and behaviour of the aspirants and officials to be engaged in the selection process.”

“Consequently, the BoT has forwarded its full recommendations to the National Working Committee (NWC) of the PDP for consideration,” Jibril stated.

Though the governors said they would have preferred a consensus candidacy but said that they would not impressed it on the aspirants.
The governors als agreed that the party’s national convention, where the presidential candidate would emerge, should be held in Port Harcourt, the Rivers State capital.

Political analysts believe that while all the aspirants for the ticket of the party have something to offer, it would be better to put forward a candidate who is facing corruption cases hanging on their necks.
Another school of thought posits that a strong message would have been sent in favour of loyalty, if the PDP presidential candidate is one of those who kept his allegiance to the party when others abandoned it. For now, the candidate that will win the October 6 primary is anyone’s guess.