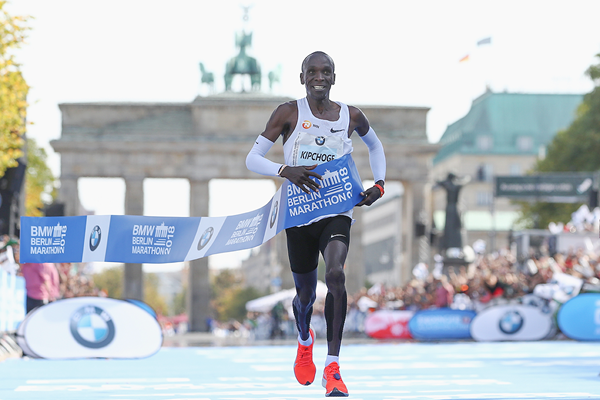 From the early stages of the race, the 33-year-old Kenyan had just a handful of pacemakers for company as they passed through five kilometres in 14:24 and 10 kilometres in 29:21. But shortly after 15 kilometres, which was reached in 43:38, two of the three pacemakers were unable to continue and withdrew from the race.

The final pacemaker, Josphat Boit, led Kipchoge through the half-way point in 1:01:06 before dropping out at 25 kilometres, covered in 1:12:24.

Running alone with 17 kilometres left, Kipchoge then sped up.

He passed the 35-kilometre checkpoint just a shade outside 1:41:00, suggesting a finishing time inside 2:02 was possible. By 40 kilometres, reached in 1:55:32, a world record looked a certainty.

Kipchoge maintained his form well in the closing stages and crossed the finish line in 2:01:39, taking one minute and 18 seconds off the previous world record set four years ago by Dennis Kimetto. It is the largest single improvement on the marathon world record since Derek Clayton improved the mark by two minutes and 23 seconds in 1967.

“I lack the words to describe how I feel,” said Kipchoge. “It was really hard [during the last 17 kilometres] but I was truly prepared to run my own race. I had to focus on the work I had put in in Kenya and that is what helped push me. I’m really grateful to my coaching team, my management, the organisation.”

Amos Kipruto finished a distant second in 2:06:23 while former world record-holder Wilson Kipsang was third in 2:06:48.

Gladys Cherono made it a Kenyan double by winning the women’s race in a course record of 2:18:11.

Multiple world and Olympic champion Tirunesh Dibaba led during the early stages, passing through half way in 1:09:03. Cherono, Ruti Aga, Edna Kiplagat and Helen Tola were close behind, and when Dibaba started to struggle a few kilometres later, Cherono moved into pole position.

Cherono, the winner in Berlin in 2015 and 2017, successfully defended her title in 2:18:11, taking more than a minute off the course record set 13 years ago by Japan’s Mizuki Noguchi.

Aga followed 23 seconds later to take second place in 2:18:34 while Dibaba held on for third place in 2:18:55. It was the first marathon in history in which three women finished inside 2:19.