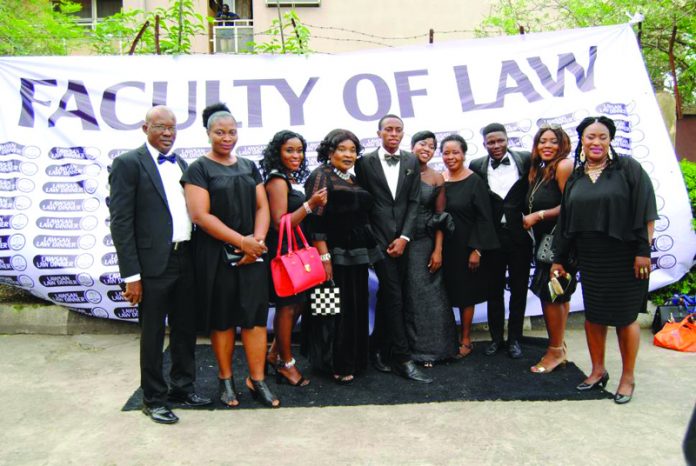 It was fun and a refreshing evening for the Law Students Association of the National Open University of Nigeria (NOUN), Lagos Chapter. The President of the Chapter, Mr. Asogbon Oluwayomi Godwin and other members of his executive committee were in their best of spirit.

This 2018 Law Dinner of the Lagos chapter of the Law Students Association (LAWSA) with the theme: “Acceptability of Digital Legal Education in This 21st Century …A Way Forward” was acclaimed as most successful and with the high turnout of  such calibre of persons as the Dean, Faculty of Law, NOUN, Dr. (Mrs.) Alero Akujobi, National President of the Association, Mr. Austin Obano, who came all the way from Benin, the Edo State capital, to be part of the occasion, the Guest Speaker for the night, Mr. Seyi Sowemimo, SAN, a former Chairman of Oshodi/Isolo Local Government, Lagos State, Hon. Afeez Ipesa-Balogun, who was on hand as a  Special Guest, other equally prominent guests of note and a huge presence of members of the Association, they had every reason to be.

Amidst the eating and drinking, Asogbon cheerily told the delightful audience that they were not only there that night to eat, drink together and listen to the special lecture for the evening, but to rub minds on all issues, relating to their academic pursuit at the NOUN, honour and present 25 awards to the most deserving among them and ensure that every member of the Association left with a Certificate of Honour in their names. After the sumptuous meals and the presentation of the awards and certificate, the palatial room of the NUT Pavilion in the sprawling magnificent quiet Alausa Suburb of Ikeja, the Lagos Seat of power and capital, was electrified in the joy of a successful outing.

Before then, the Special Guest Speaker, Seyi Sowemimo, Secretary, Body of Senior Advocates of Nigeria (BOSAN), held the audience spellbound with his presentation. The “Acceptability of Digital Legal Education in This 21st Century,” the subject he spoke on, he told them, was now on the front burner of current legal discourse as the future of the legal profession hangs on it. Pointing out that digital legal education is of utmost importance today to all lawyers, young and old, the legal luminary told the gathering that the digital legal process is not only now taking the centre stage in the country and beyond and becoming the norm for the profession, it was increasingly turning a manifestation of a revolution or a transformation in the way legal services are to be rendered. He was convinced that the trend would make the practice more efficient, more cost effective and more challenging, stressing, however, that “only those lawyers equipped with broad digital legal education have any hope of survival.”

Just as the wide applause occasioned by the lucid presentation receded, a thaw of silence enveloped the hall by a kill joy remark of the National President of LAWSA, Mr. Obano, who next addressed them. The President, who tried to take them through the lingering struggle by the executive committee to ensure that they at last gain the recognition of the Council of Legal Education in Nigeria to make it possible for graduating law students of NOUN to be admitted to the law school and get called up ultimately to the bar to be able to practice their dream profession of law in the land, left a sad taste in the mouth. Assuring them that they were working round the clock to ensure that the issue remains in the front burner, Obano took the students round the unending struggle, from the National Assembly through the umbrella body of students unionism in Nigeria, the National Association of Nigerian Students (NANS) to the table of the President of the Federal Republic, where the amended law of NOUN has remained seated, awaiting his assent to finally remove the encumbrances inherent in its establishing Act of 1983 that have from time impacted negatively on the academic and professional prospects of the NOUN students.

With several hundreds of students already graduated from the NOUN School of Law since the commencement of the university some 18years ago, its law students have been unable to gain recognition to be allowed admission into the Law School to make it possible for them to be called to Bar and practice law in the country, just as it is impossible for eligible graduates of the school for the National Service Corps to participate in the scheme.

The issues over all of these bother on the negative perception of the public about the University in respect of the word, ‘correspondence’, which gave the impression that the University programmes were not full but part time.

The Council of Legal Education had in a terse advertorial, entitled: “Non-Recognition of the LL.B Degree Programme of the National Open University of Nigeria,”  gave that position more prominence sometime ago, when it declared that the LL.B degree programme offered by the National Open University of Nigeria does not have its approval, stating that “the policy of the statutory bodies responsible for the training and admission of aspirants to the Nigerian Bar, i.e. the Council of Legal Education and the Body of Benchers is that the study of Law must be undertaken on a full time basis, in recognised institutions for the provision of undergraduate studies. This is also the position of the professional body of lawyers in Nigeria – The Nigerian Bar Association.”

The National Universities Commission (NUC) does not help matters either, given its double speak on the issue. While on one hand it says that it gave the NOUN the approval to run the programme, on the other, it argues that it is one thing to give approval to mount a programme and another for it to get accreditation.

While this remains the position of these bodies, the reality today, however, is that the faculty has long gone beyond the level, having now established tutorial centres and engage facilitators, lecturers and conduct examinations for its students.

Beyond that also, recent positions and pronouncements of prominent citizens and organisations, including lawyers on the matter are as well hope- inspiring for the students.

Chief Olusegun Obasanjo, former President of the Federation and an alumni of the University   had during a recent visit to him by LAWSA, urged the students, particularly the law graduates to be patient with the authorities, expressing the confidence that all would be well. According to him, although there are complaints now about the accreditation of the law programme, he was confident that it has come to stay.

In the same light, speaking on the passage of the amendment to the Act, establishing the school by the Senate, Senator Barau Jibrin, ChaIrman, Senate Committee on Tertiary Institutions and TETFUND, told his colleagues while presenting the report of his Committee to the whole house, “These two concepts, “Correspondence” and “Part-time” significantly affect the way the public views the programmes run by the University. The amendment would address the perception of the public about the university, regarding the contentious, “correspondence” usage in the Act, this has been the reason why the law graduates of the School are not admitted into the Nigerian Law School as well as the reason for the non-inclusion of the graduates of the University into the National Youth Service Corps Scheme.”

Similarly, while The Nation Newspaper in a recent editorial, entitled, “NOUN Vs Law School,” vehemently canvassed for the recognition and accreditation of the NOUN Law programme to make the students eligible to attend the Law School, get called up to the Bar and practice law, Ebun Adegboruwa, a leading human rights lawyer in the country, at last year’s Law Dinner of LAWSA in Lagos, called for the recognition of the NOUN Law programme, saying: “…Presently in the courts, lawyers do most of the legal work now in their chambers because of the rule of front-loading. Research has become easier with digital law reporting, such that in no distant future from now, classroom education will become a thing of the past. This is where NOUN comes in through distant learning. It is a vision that we must all embrace now. There is no reason to keep resisting the new vision. I can only appeal to the Council of Legal Education, the Nigerian Bar Association and the Body of Benchers to embrace the NOUN Law Students and allow them contest for space in the open market. The digital age is a reality that we cannot wish away.”

The resuscitation of the NOUN took place in 2001 after the then military government shut down the institution in 1984 while its Law faculty came into operation in 2007.