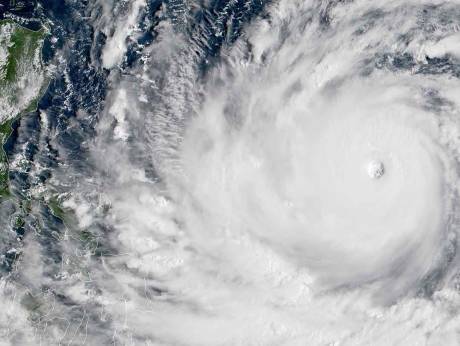 Typhoon Mangkhut retained its ferocious strength and slightly shifted towards more densely populated coastal provinces on Friday as it barrelled closer to the northeastern Philippines, where a massive evacuation was underway.

More than four million people are at risk from the storm, which the Hawaii-based Joint Typhoon Warning Center categorises as a super typhoon with powerful winds and gusts equivalent to a category 5 Atlantic hurricane.

It was initially expected to hit the northern tip of Cagayan province early Saturday, but it’s now likely to make landfall farther south and closer to Isabela province then cut across the northern breadbasket, Philippine state forecaster Chris Perez told The Associated Press.

The change won’t make much difference because of the typhoon’s massive size, he said.

A huge raincloud band 900 kilometres (560 miles) wide, combined with seasonal monsoon rains, means the typhoon will bring heavy to intense rains that could set off landslides and flash floods.

Warnings have been raised in 25 provinces across the main northern island of Luzon, restricting sea and air travel.

The typhoon is approaching at the start of the rice and corn harvesting season in Cagayan, a major agricultural producer, and farmers were scrambling to save what they could of their crops, Cagayan Governor Manuel Mamba said.

The threat to agriculture comes as the Philippines tries to cope with rice shortages.

Mangkhut was tracked on Friday about 400 kilometres (250 miles) away in the Pacific with sustained winds of 205 kilometres (127 miles) per hour and gusts of up to 255 kph (158 mph), Philippine forecasters said.(NAN)