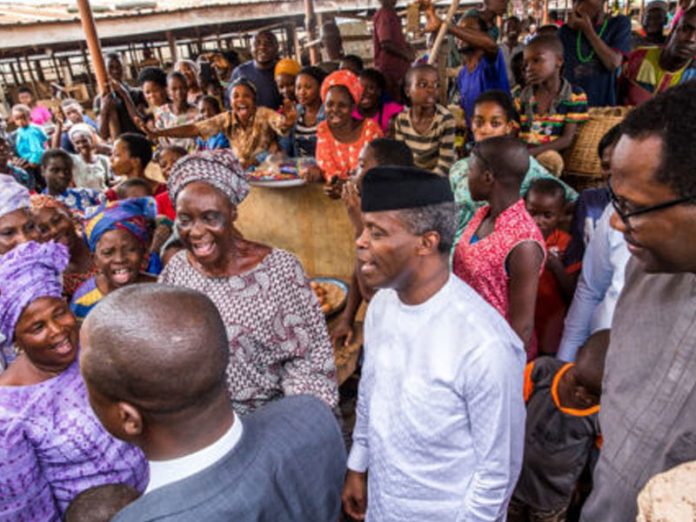 Vice-President Yemi Osinbajo literally lit up the Utako Market in Abuja as he arrived Thursday to witness the disbursement of collateral and interest free loan, Tradermoni, to petty traders.

He also used the opportunity to interact with the traders, while also delivering a message of support from the Buhari administration.

Osinbajo told the traders that in line with the agenda to spread prosperity and reduce poverty, the federal government will continue to initiate and sustain programmes aimed at uplifting Nigerians at the bottom of the pyramid, especially petty traders regardless of their socio-political background.

The scheme is part of the Social Investment Programme of the Buhari administration.

So far, the programme has been launched in Lagos, Kano, Katsina, Abia and Osun States and would be extended, in quick succession, to traders in all the states of the federation before the end of 2018.

The vice-president said every petty trader is eligible to benefit from the scheme and urged them across the country to take advantage of the scheme to improve their businesses.

He assured beneficiaries that the amount given to them would be increased if they paid back their loans within the stipulated period, adding that President Muhammadu Buhari himself was interested in the welfare of the traders.

According to the vice-president, “The one we did before was for big traders under the GEEP programme, we gave them as much as N100,000. If you do well with this one we are giving you now, we will increase the amount.

“When we give you this money, we want you to pay back and no interest is involved.”

Earlier on arrival at the market, Prof. Osinbajo went round interacting with petty traders before he proceeded to address the traders who had thronged access roads around the market to receive him.

The vice-president was accompanied to the programme by two Ministers of State — Industry Trade and Investment, Hajiya Aisha Abubakar and Zainab Ahmed — among other top government officials.(NAN)