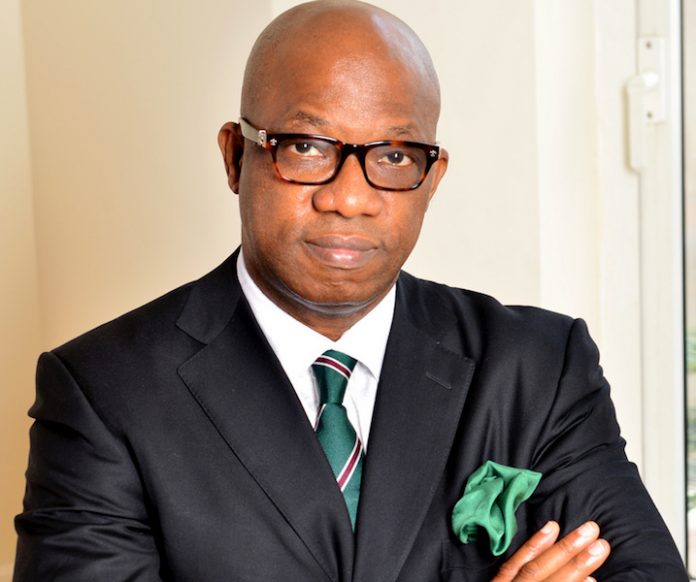 Femi Ogbonnikan reports that successful businessman, Dapo Biodun turned his recent formal declaration of intent for the governorship of Ogun State into a disclosure of his previously unknown achievements as a politician

As the primaries of the All Progressives Congress (APC) are slated to commence soon, the political clime in Ogun State appears tense and shrouded in uncertainty. The governorship radar is not pointing to any clear direction. No one can say with certainty, whether it will swing to the Ogun West or Ogun East, going by the recent declaration of intent by, Prince Adedapo Oluseun Abiodun, a close ally and a bosom friend of Governor Ibikunle Amosun.

At his formal declaration in his Iperu-Remo country home in Ikenne Local Government Area of Ogun State, he was flanked by notable APC stalwarts from the three senatorial districts from across the state. Abiodun, popularly known as DA, left no one in doubt as to his determination to slug it out in the coming Ogun State governorship race, not minding whose ox is gored. He described the decision of the party’s leadership to zone the coming 2019 governorship ticket to a particular senatorial district in the state as lacking merit.

Across party lines, his foray into the governorship contest has sent jitters down the spine of many and as well, continued to benumb the sensibilities of the party’s state hierarchy and the powers-that-be.

According to political observers, if the governorship ambition of the 58 year-old political figure is anything to go by, it is going to heat up the polity and alter the political equation in the state.

Prior to the 1999 return to civil rule, the trio of Otunba Gbenga Daniel, Senator Ibikunle Amosun and Prince Dapo Abiodun had been very good friends. His friendship with Amosun subsequently turned sour, following the indication of the former intent to throw his hat into the governorship ring early last year 2017.

According to Abiodun, “Amosun formed an alliance with and lined behind Daniel to become Ogun State governor in 2003. He (Amosun) was responsible for Daniel’s victory. The arrangement between them was for Daniel to go for eight years, after which Amosun would take over from him, but they both fell apart. In 2011, Amosun contested on the platform of the Action Congress (AC) and he won the governorship race.

We all gave him the support to run on the platform of the AC. But credit for his victory should go to Asiwaju Bola Ahmed Tinubu who facilitated his acceptance into the AC fold. It was Tinubu who introduced Amosun to Chief Olusegun Osoba who was the leader of the AC in Ogun State. After much pleas and persuasion by Tinubu, Osoba accepted and allowed Amosun to fly the AC ticket in Ogun State. He had a slim chance, but by divine orchestration, the ruling-PDP in the state was split into two, with a group going to a newly formed Peoples Party of Nigeria (PPN) and the other remaining in the PDP, due to an intractable intra-party crisis that rocked the party in the state. Amosun became the governor and we were close friends.”

Continuing with his justification for taking a shot at the Ogun State Number One job, he said, “In 2014, preparatory to the second term of Amosun, I was invited to help APC in my Ogun East senatorial district because the party was almost dying. Out of conviction, for the good job Amosun was doing in the state, I accepted to serve, because the party was comatose. We did well. I tried my best. In 2003, politics was local, because playing politics from grassroots to the top was very low. Regular meetings were hardly held in wards, local government, senatorial and state levels. In 2015, we did everything that we should have done. We ran a very good campaign, from providing electricity to Ogun Waterside in a community that had no light for over 12 years, to constructing roads, to giving transformers to those communities that didn’t have electricity and to giving out scholarships to indigent undergraduate students in tertiary institutions of learning. There left nothing undone.

In every ward, local government and senatorial district, we were having meetings. The fortune of the party obviously changed before we began to participate. It is most unfortunate that, I fought hard to convince myself because most of my colleagues in my industry that, have asked me, “Dapo, what are you doing in politics? You are doing well in your various businesses, God has been so good to you, why are you going to waste your time and energy?” I always tell them that, if all of us decide not to participate then, we would leave governance and administration to fools. I would be governed by them. And we would sit down in Lagos and we would begin to complain that, ‘look at what is happening here’ The only thing you can do is to ensure there is a change and to ensure good governance is to actually participate. I believe that, if a few of us in the private sector who have done well in our various and diverse backgrounds who have made successes of our various businesses, participate then, we can begin to change how people see politics. We can bring our experiences into governance.

“With that, at the back of my mind, I decided to run for the Senate in 2015. Unfortunately, our voting publics have not got to a point where merit, integrity, character, decide who they vote for. If the voting publics were doing enough, I have no doubt that, I would win that election. We accepted the outcome of the election as the will of God. We sat down, after that election and analysed how it went. What did we do wrong? What did we do right? What should we have done? We saw where we were rigged out. We saw where elections were bought, and we decided that, rather than pack our bags and leave, we would stay and work towards ensuring that the stage we were rigged out during that election would not repeat itself at the governorship election that was two weeks away.

It is very difficult to lose an election and stay behind to work for someone else to win the election afterwards. We had a strong purpose and determination. As for me, it was not about self. It was the collective responsibility and the determination to ensure that the party won. I did feel a sense of obligation to ensure that Amosun wins that ticket. We lost more in Remo zone than in other areas. We decided to focus on Remo zone this time around. We began to do other things that, we didn’t do during my own election.

“We did the needful and we won the election in the wards and local government levels and we ensured that Amosun won the office. In that election, we won Remo zone and it was very decisive because, if you look at the election, the governorship was lost in Ijebu-Ode, Ijebu North-East, Ijebu North and Ogun Waterside local government areas. It was where I won that the governor lost. To the glory of God, Amosun had the second term. His Excellency’s second term is minor. We had got to prepare for succession, there is a lot of talk about zoning of the governorship ticket to Ogun West senatorial district. The first thing, I will like to say is that, it is not within anyone’s heart to aspire for this office. There is no law in this country that makes provision to say that, a particular position must go to a particular district.

However, if my friend, His Excellency, is not aligned with my ambition to become Governor of Ogun State, it doesn’t stop us from being friends. I have a strong sense of purpose and determination. There is no iota of desperation in this project. My governorship intent is not for pecuniary reasons.

On that subject- matter, we have been divergent. I do not want the media to promote enmity between the governor and I. We are like family.

“If I have somebody else and he wants a particular person to be governor and I believe that, being governor of Ogun State is thrown open to the person that wins the primary election; that person must have the intellectual capacity, the moral capacity and have the experience within the private and public sectors to build on what Amosun has done within the last eight years. I that case, someone should not be appointed to succeed him. That is the only thing that can make me cut away from him. I am relying on the strength of my wealth of experience in the private sector, my clout and the size of the local government areas that make up the Ogun East senatorial district. I am poised to actualise my governorship intent.

“I don’t need to raise funds because I have been blessed to single-handedly finance my governorship intent. I have the connection to make things work.

The political journey has started and we are on course. We have been consulting, day and night to ensure we get to the promise land,” concluded Abiodun.