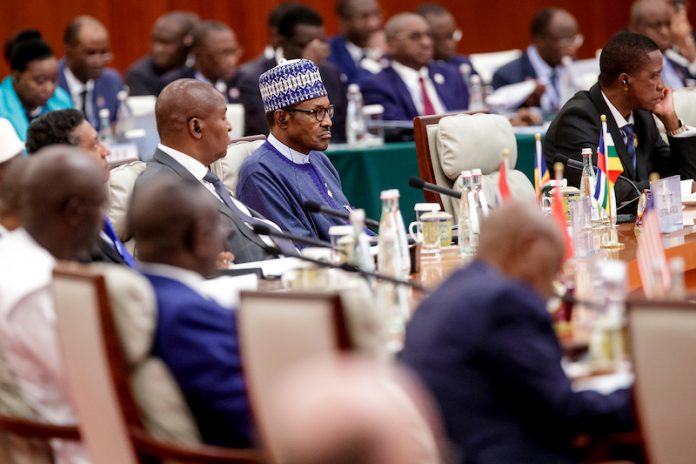 President Muhammadu Buhari yesterday in Beijing, China said
Nigeria’s partnership with China through the Forum on China-Africa Cooperation (FOCAC) has yielded over $5 billion investments in the last three years.

He quoted him as saying, ”For Nigeria, our partnership with China through the FOCAC platform, has resulted in the construction of the first urban rail system in West Africa. This $500 million project in Abuja was commissioned in July this year.”
He said the president also cited the construction and operation of the first rail system in Africa that uses modern Chinese standards and technology.

He further quoted the president as saying, “This 180km rail line that connects Abuja and Kaduna was commissioned two years ago at a cost of $500 million. Today the rail line is functioning efficiently with no issues – indeed, a sign that Chinese technology is world class,” he noted.

”Nigeria is leveraging Chinese funding to execute $3.4 billion worth of projects at various stages of completion. These include the upgrading of airport terminals, the Lagos – Kano rail line, the Zungeru hydroelectric power project and fibre cables for our internet infrastructure.

”Furthermore, less than 3 months ago, Nigeria signed an additional $1billion loan from China for additional rolling stock for the newly constructed rail lines as well as road rehabilitation and water supply projects.”
He also said the Nigerian leader said the aforementioned projects had demonstrated the high level of consistency and commitment that China has shown in boosting its relations with African countries under the umbrella of FOCAC.

”I am optimistic that this summit will offer new opportunities that would build on these past achievements,” he said, adding, ”Nigeria will continue to support the FOCAC initiative and also seek to key into the Belt and Road Initiative as an additional Chinese mechanism to build further cooperation in our quest for infrastructural and economic development.”
Shehu said Buhari dispelled insinuations about the so-called debt trap by Chinese government on developing countries, insisting that Nigeria would be able to re-pay the loans.

”These vital infrastructure projects synchronize perfectly with our Economic Recovery and Growth Plan. Some of the debts incurred are self-liquidating. Our country is able to re-pay loans as and when due in keeping with our policy of fiscal prudence and sound housekeeping,” the president reportedly added.

The statement also said Buhari applauded China for its overall commitment to the ideals of FOCAC, acknowledging that since the launch of the Forum in 2000, China and Africa had strived to implement the declarations and follow-up action plans for the benefit of both parties.
Finally, it said the president also commended Jinping, his government and people for successfully hosting the Beijing summit, which he said was aimed at further strengthening China-Africa partnership.