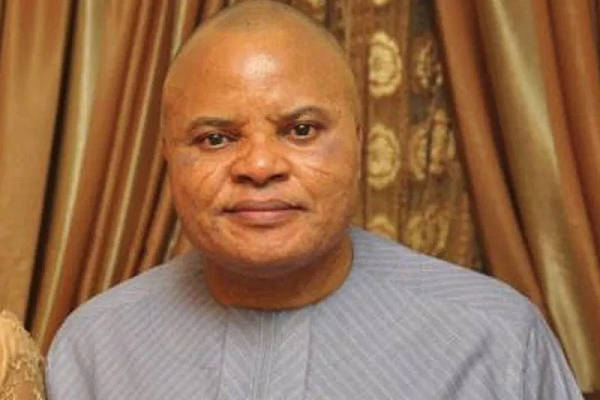 The two politicians who are currently engaged in running battle with Governor Rochas Okorocha for the control of APC structure in Imo State arrived at the party secretariat in Abuja at about 1.30pm and headed straight to the office of APGA national chairman.

After the meeting that lasted for two hours, both men left the Secretariat without stating their mission.

When THISDAY approached Ararume to inquire about what transpired, he declined comments, saying it was a private meeting.

Izunaso also told journalists that consultations were still ongoing and that another meeting had been slated for Friday.

“I can’t talk now. I have already said that. After our final meeting, I will talk. I am going to have another meeting on Friday and we will talk after that,” he said.

Although Ararume did not state the outcome of the meeting, it was however gathered that the former senator may pick the nomination form of the party on Friday to contest for the Imo governorship seat.

A source said both Ararume and Izunaso registered as members of APGA last week in their wards in Imo State.

So far, Imo State is leading with over 30 aspirants, gunning for governorship, senatorial and House of Representatives seats. Imo State is followed by Anambra.

One of the leading figures in the race for the Anambra South senatorial election and Chairman of Capital Oil, Ifeanyi Ubah, was among those that were at the party secretariat Wednesday to pick his senatorial form.

Addressing supporters who accompanied him, Ubah said he would work to ensure favorable business environment for his kinsmen from the South-east.

He said one of the reasons for youth restiveness and other vices in the land was because the existing policies did not encouraged youth enterprise.

When asked to speak on his chances against the wife of late APGA leader, Mrs. Bianca Ojukwu, Ubah said he would not be drawn into any fight with the woman because traditionally Bianca was his wife.

He said that he was optmistic that at the appropriate time, Mrs. Ojukwu will be stepping down for him.

He told newsmen that he would secure the ticket and represent his senatorial district.

Similarly, Mr. Kemdi Opara has also picked a nomination form for to represent Mbaitoli/Ikeduru Federal Constituency of Imo state in the House of Representatives.