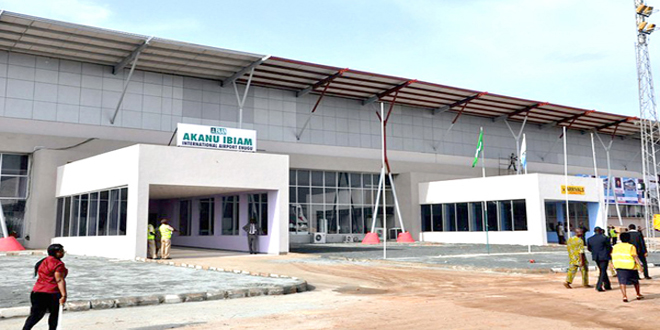 Governors of the Southeast states at the weekend lamented the deplorable state of the Akanu Ibiam International Airport in Enugu, and asked for the urgent intervention of the federal government in order to avert impending disaster.

The governors specifically drew the federal government’s attention to the deplorable state of the runway, the runway lights and the tarmac, and therefore called on the Minister of State for Aviation to visit the airport for an on-the-spot assessment with the aim of addressing the problems facing the airport.

Briefing journalists at the end of a closed door meeting at the Government House in Enugu, the Chairman of the Southeast Governors’ Forum and Governor of Ebonyi State, Chief Dave Umahi, made it clear that the facilities at the airport were beginning to make the place unsafe.

According to him, “The place is not safe for our people.  The recently installed runway light is not working; a situation where no flight can land at the airport beyond 6:30p.m. is totally out of order.

“The Aviation Minister should quickly visit the place and take care of the situation. There’s also a building around there that was destroyed by wind; ordinarily, it shouldn’t take the federal government more than N15 million to fix it.”

Umahi said the meeting, which was attended by Governor Okezie Ikpeazu of Abia State and the host, Governor Ifeanyi Ugwuanyi of Enugu State, also requested that urgent steps be taken for the reactivation of the cargo section of the airport.

The Forum, according to him, also received an interim report from the South East Consultative Committee on Health, which was set up to facilitate the establishment of world class health facilities in each state  of the region.

He said the Forum noted the caliber of health and other professionals in the committee, and commended them for the progress so far, urging them to work towards ensuring the transformation of the zone into a medical tourist destination in Nigeria.

The governors also received presentation from the South East Region Development Fund (SENDEF), the financial arm of SEREDEC, and urged them to channel all development plans in the South-east region through the secretariat of the forum.

Governors of Imo and Anambra States,  Rochas Okorocha and Willie Obiano, did not attend the meeting as they are presently in China with the president.

Meanwhile, the Akanu Ibiam International Airport Enugu received Ethiopian Boeing 777-200 Freighter (Cargo). Ethiopian Airlines is the largest Aviation group in Africa and a SKYTRAX certified four star global airline. The Boeing 777-200 Freighter is among the newest and biggest aircraft recently acquire by the airline group. This has further attested to Ethiopian Airlines commitment to delivering a world-class service to the Southeast region in Nigeria and Africa in general.

Regarding the new cargo flight, the Traffic and Sales Manager, Ethiopian Airlines in Enugu, Mr. Solomon Mekonnen Mengistu, said: “We are very pleased to see the newest aircraft. This is to show our desire to see growth of business in this all important  region while joining our fast expanding freighter network across the globe. In line with our strategic roadmap, Vision 2025, we will keep on expanding our cargo destinations worldwide.”