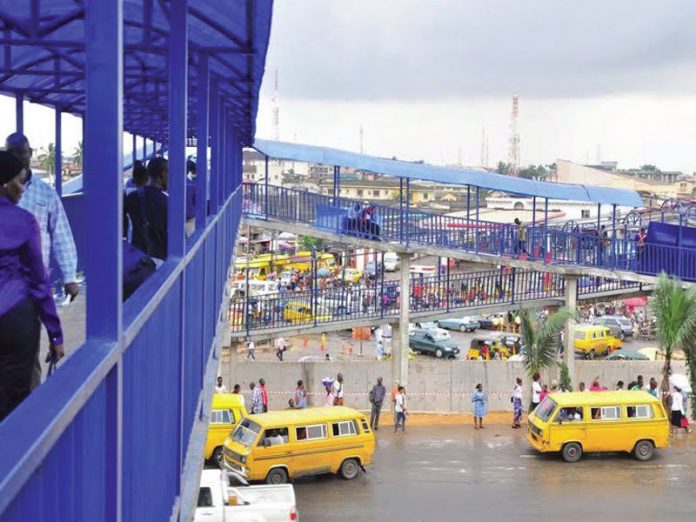 With the multiplicity in the number of pedestrian bridges in Lagos, some residents still shun the life-saving public utility. Kayode Fasua Reports:

Osayi Omoigui was sprightly and chirpy as she made to cross over a busy Lagos highway. It was only 10 days to her wedding and the chummy air of celebration was palpable.

But she would never be the bride. Poor Osayi was knocked down by a hit-and-run driver as she reportedly made to run across the scary Berger Bus Stop’s portion of the Lagos-Ibadan expressway. She died instantly. At the period, there was no pedestrian bridge at the Berger portion of the road. That was in December 2014.

Elsewhere at the Ibeju-Lekki local council area of Lagos, an unidentified man whom eyewitnesses suspected must have either been drunk, tipsy or mentally deranged, was crushed beyond recognition by a fast-moving vehicle, when he reportedly swaggered on the main road, along Lekki-Epe Expressway. This occurred way back in September, 2016. An observer said we would never know what would have happened if a pedestrian bridge had been in place at the area in the era of the incident. Would the alleged drunk or cranky fellow have taken the option of using it to keep alive?

Early in 2017 as well, an excited masquerade made a final dance in Uyo, Akwa Ibom State, by stylishly crossing over a busy highway. He was knocked down in a jiffy by a hit-and-run driver, who, by the act, had demystified the myth of extra-terrestrial personality of a masquerade.

Upon his election as governor in Lagos in 2015, those close to Governor Akinwumi Ambode said he was humane enough to take some of his aides round the danger-prone sections of virtually all Lagos highways, with a vow to construct a pedestrian bridge in each of them, “before the end of my first term in office.”

A source said the governor was particularly determined to fix first, the busy Berger Bus Stop with a dignifying pedestrian bridge. According to him, “the governor started his career in the Lagos civil service at the Public Works office, close to the Berger Bus Stop; and as a young man of 22 then, he could hardly stand the frequent outcries of people as a result of hit-and-run accidents that was the lot of that portion of the road.”

However, Ambode, from all indications, appears to have been driven by his resolve to save pedestrians’ lives on the Lagos roads through aggressive execution of pedestrian-bridge projects.

While the governor has embarked on the construction of no fewer than 30 pedestrian bridges in the last one year, he is also embarking on various multi-billion naira fly-over bridges across critical flashpoints in the Lagos megalopolis.

While speaking during an inspection tour of Toyota Bus Stop on the ever-busy Oshodi Apapa expressway, Ambode first looked straight ahead in deep contemplation, and then said, “I promise to do a pedestrian bridge at Toyota Bus Stop. The contractor handling the Airport Road will commence work on the pedestrian bridge and this road, next week, if you allow me. That is why I have come here personally; I was here yesterday. I don’t want to inconvenience you, but I have come to appeal to you; just be patient with us; we will bring growth and development to this place.”

The pedestrian crusader that Ambode is, he has no fewer than 10 of such bridges under construction at the Lagos end of the Lagos-Abeokuta expressway, in a determined move to curb fatalities.

In the governor’s N1.04 trillion 2017 budget , for instance, he devoted 67 per cent of the financial plan to capital expenditure, of which his pet pedestrian bridges and vehicles’ fly-over bridges got a lion’s share.
However, while the Lagos governor appears to be doing his best to eliminate, if possible, fatalities arising from indiscriminate crossing-over of highways through the construction of pedestrian bridges, how compliant are most Lagos residents in using the bridges?

A community leader and Secretary to the Council of Imams in Ikeja, Alhaji Adeshina Balogun, lamented the refusal of most pedestrians to use the over-head bridges, as they often shun them, opting to risk their lives by crossing over the road.

“Even, Governor Ambode went to the extent of using barbed wires to fence off stubborn pedestrians so as to force them to use the bridge and not kill themselves. But do you know that some people still trek down to where the barbed fence terminates to cross over the road? Indeed, people are stubborn and the government has to make the penalty for failing to use the pedestrian bridge very stiff,” Balogun urged

Expressing concern about this attitude too, Ambode, while commissioning the Berger pedestrian bridge early in the year, warned Lagos residents to take road safety seriously. According to him, people need to make use of the pedestrian bridges rather than risk their lives by crossing over the express road.

He said, “The pedestrian bridge at Berger bus-stop along Lagos-Ibadan expressway has been completed and is now open for use.

We encourage Lagosians to make use of this pedestrian bridge rather than crossing the Express. We are committed to delivering on the promises we made to Lagosians.”

Meanwhile, the Lagos State House of Assembly recently attempted to hold the bull by the horn, as it passed fresh bills to deal with traffic offenders, especially those who shunned the use of a pedestrian bridge.

Moving a motion in that direction recently, Mr. Rotimi Olowo, representing Somolu Constituency 2, had informed members of the Assembly that many deaths could be avoided on the expressways in the state, only if residents would utilise the pedestrian bridges.

Olowo said, “Despite the huge amount committed by the government to provide this infrastructure in their area, a lot of people still defy the use of the pedestrian bridge provided by government.”
However, a market woman at the popular Mile 12 Market in Lagos, Mrs. Morenike Adio, said she stopped using Lagos pedestrian bridges for two reasons. The first is that, “It is strenuous doing so, as it weakens my legs”. She gave her second reason as “I’m always feeling dizzy while on top of the bridge, as if something could make me fall over.”

“So what I always do is to watch carefully while crossing over the road,” Mrs. Adio said.
But puncturing such claims, a former Vice-Chairman of Ikeja Local Government and chieftain of the All Progressives Congress, Alhaji Abdulfatai Anifowose, asked, “Which is better between climbing a bridge and descending safely, and running across a road only to be killed by a fast-moving vehicle?”

Anifowose said Lagos residents were grateful for the live-saving pedestrian bridges of Governor Ambode and other of his road construction achievements.