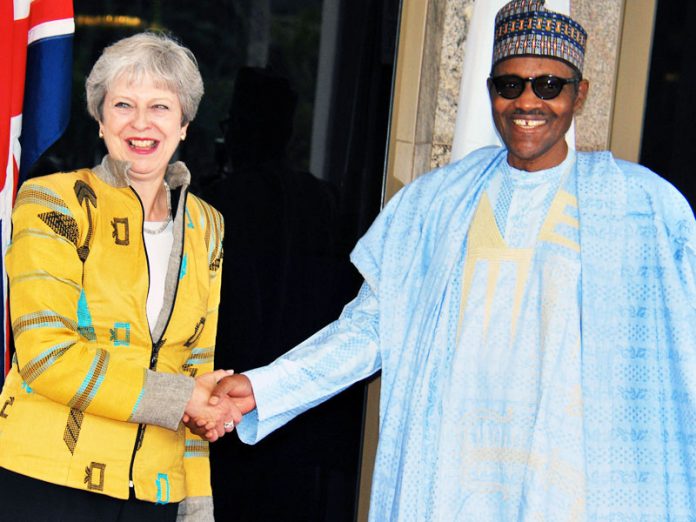 President Muhammadu Buhari Wednesday in Abuja assured the United Kingdom Prime Minister Theresa May of his commitment to conducting free, fair and credible elections in 2019.

A statement by the Special Adviser to the President on Media and Publicity, Mr. Femi Adesina, said Buhari who made the promise at a bilateral meeting with May, welcomed UK’s assistance meant to strengthen democratic institutions in the country.

‘‘I assure you that I’m all out for free, fair and credible elections. I’m very pleased that my party is doing very well. The High Commissioner will brief you more. The recent successes in polls in Katsina, Bauchi and Kogi have boosted our morale greatly.

‘‘Nigeria has accepted multiparty democracy and that is putting politicians on their toes, forcing them to work harder,’’ the president was quoted as saying.

On the anti-corruption campaign, Adesina said the president applauded the British support to the country, noting that the success of the fight was very important to ordinary people in the country.

He further quoted him: “We had great opportunities and resources between 1999 and 2014, due to high oil prices. But when we came in 2015, oil prices plunged to as low as 37 dollars per barrel.

‘‘What we have been doing since 2015 is to focus on infrastructure development, despite low earnings. Work is ongoing in roads, rail, power, and many others.”

On Brexit, he said Buhari noted that UK’s planned exit from European Union (EU) provides an opportunity to strengthen the historic ties between Nigeria and the UK.

‘‘We are nervously watching the development about Brexit because we know that the relationship had been on for a long time. I assure you that I am prepared to strengthen the relationship between our two countries,’’ he said.
According to Adesina, the president thanked the UK government for its support on security and the fight against insurgency in North-eastern Nigeria, as well as the improved trade relations between both countries.

‘‘I am very grateful to the British government under your leadership for the help in security, particularly your training team that is in our institution in Kaduna,’’ Buhari reportedly said.

The statement added that before the commencement of the bilateral meeting, Buhari underscored the need for UK’s support on moves to revive the Lake Chad, which he described as a means of livelihood for millions of people.
It also said the president told the visiting prime minister that Europe and China were already conducting an in-depth study on how to recharge the lake through inter-basin transfer from the Central African Republic.

Furthermore, Adesina said in her remarks, May, who welcomed the assurance by the Nigerian government that it would conduct credible elections in 2019, said she was pleased to be in Abuja to continue the ‘‘excellent discussions’’ she started with Buhari in London in April, this year, particularly on security, trade, asset recovery and the fight against corruption.

‘‘Security and defence cooperation are very important steps to address Boko Haram and Islamic State in West Africa,’’ he quoted May as saying.

On asset recovery, he quoted May as saying: “We do not want to hold anything that belongs to Nigerian people, but we follow the judicial process, which can be slow.’’

The statement added: “The prime minister appealed to President Buhari to use his position as ECOWAS Chair to keep the issue of human trafficking on the front burner in the sub-region.

The two leaders signed two pacts bordering on security and economy.
May, who arrived the Presidential Villa in company with some British officials at 1p.m., was received by some top government officials.

After the meeting, which lasted for about 50 minutes, there was no usual press briefing by Buhari and May but the Minister of Foreign Affairs, Chief Geoffrey Onyeama, told journalists that two pacts were signed by the two countries.

According to him, the first agreement bordered on defence and security, which he said was signed by the security advisers of the two countries while the second is meant to boost the economies of both countries.

According to him, the security and defence pact covers all aspects of security challenges confronting Nigeria, including training, policing, civil policing, human rights and close cooperation between the two countries.

Furthermore, Onyema said the second pact aimed at guaranteeing the prosperity of Nigeria and Britain by leveraging on areas where the two countries have competitive advantages including prospective business investments in Nigeria.
He also said the economic pact would involve all stakeholders particularly in view of the planned exit of the United Kingdom from the European Union (EU) in 2019, saying with Brexit, the United Kingdom would be free to engage in bilateral relations, a move which he said would also be beneficial to Nigeria.

“There are two agreements that were signed today. The first one was on defence and security pact between our two countries’ respective national security advisers and the second one was an economic development forum that’s been set up.

“This clearly highlights the two priority areas in our relationship at the moment. Under the defence and security pact, it’s a comprehensive agreement that covers all aspects of the security challenges. So apart from the military training, but also the support, the policing, civil policing and human rights aspects of security and the close cooperation that our two countries will have. The training that will be provided also by the UK to our security forces.

“On the economic development forum, this is a forum that really aims at co-prosperity of our two countries. It’s looking to leverage on areas where we have, as countries, competitive advantages: the financial centre that London is and the investment opportunities in our country to build that up with the private sector as well as at the government level.

“It will be comprehensive and will involve different stakeholders. This is in the context of UK’s Brexit, coming out of the European Union. They feel freer now to engage with countries on a bilateral level and build up trade relations with those countries.

May has been on tour of three African nations including Nigeria to boost alternative business relations that will cushion the effect of Brexit next year.

The British Prime Minister, May, was later received in Lagos Wednesday by Governor Akinwunmi Ambode, where it was affirmed that the state remained a choice destination for investors from the United Kingdom.

May arrived the Presidential Wing of the Murtala Muhammed International Airport at 4:30p.m. and was received by Ambode; the Deputy Governor, Dr. (Mrs.) Oluranti Adebule; the Secretary to the State Government, Mr. Tunji Bello; and the Special Adviser, Overseas Affairs and Investment, Professor Ademola Abass.

Welcoming the prime minister, the governor traced the relationship between Britain and Nigeria back to the 19th century, noting that much of Nigerian education, cultural and political systems was influenced by Britain and that there are more Nigerians living in the UK than elsewhere in the world outside Nigeria.

Ambode emphasised that Lagos remained a place of choice for British investors, especially given that stability in the government, the size of Lagos economy and population, the particular focus of his administration on the rule of law and justice sector reform.

All of these, the governor said, have not only enhanced the ease of doing business in Lagos but also ensured a greater protection of people and investment in the state.

He said Lagos would appreciate it if the British investors that came with prime minister could explore the various opportunities that abound in the state, including energy, technology, export finance, infrastructure and the creative industry.

Ambode said he was optimistic that relations between Britain and Lagos could only become stronger, stressing that his administration would do whatever it would take to forge closer association.

In her response, May said she was happy to be in Lagos, underscoring the commercial importance of the state in Nigeria.

She pointed out the important role that a stable government in Lagos plays in giving extra confidence to investors in the state.

The Head of the British Government also disclosed the availability of export credit finance to the tune of 750 million pound sterling as well as a considerable development finance, which Lagos State could look towards.

She spoke about the role that Britain could play in the development of the technology industry in Lagos given the particular capability of the UK in that area.

In that regard, the PM disclosed that she brought as part of her delegation, an expert in Fintech to explore the opportunity in this area that Lagos could benefit from.

The British Prime Minister also noted the special strength of the London City as a financial hub that could be of considerable importance for Lagos State, just as she emphasised sustainability and growth in Britain/Lagos relationship.

Finally, she expressed the desire of the British government to assist Lagos in the development of her creative industry and alluded to the fact that the jacket she was wearing when she met with the governor was actually made in Nigeria.