President Muhammadu Buhari has assured Nigerians that he would not interfere with the Independent National Electoral Commission (INEC) before, during and after the 2019 general elections.

The president also gave an undertaking that he would ensure that next year’s polls are free, fair and credible.

The Special Adviser to the President on Political Matters, Senator Babafemi Ojodu, expressed the Buhari’s positions when he read the president’s speech at the 2018 Annual Nigeria Political Parties summit held in Abuja yesterday.

“Today, I pledge to Nigeria, my country to promote free fair and credible election devoid of any form of interference in the activities of INEC, to ensure security and promote a violence free election devoid of animosity and hate speeches, to abide by the extant laws governing political parties and adhere strictly to the code of conduct of political parties in Nigeria. So help me God,” he said in the speech read at the summit, organised by Nigeria Institute of Policy and Strategic Studies, Kuru, Jos with the theme, “Political Parties and Peaceful Conduct of the 2019 Elections.”

The president said, “What has brought us together is our strong desire to build a budding democracy through a peaceful 2019 general election. No matter the nature and level of our political influences, we do not have another nation than Nigeria. These differences should not divide us but should make us stronger. With commitment and perseverance, we will triumph.”

He said that the country had surmounted the challenges of the past 19 years of constructive democracy with wisdom, courage and sacrifices and taste for glory.

“On our part, I want to reassure the nation that this administration is committed to a democratic process characterized by free, fair and credible election. We are committed to providing an enabling environment and a level playing ground for all political parties in the electioneering process without hindrance,” he said.

The president further said that he remained indebted to all the silent patriots that had piloted the nation’s democracy to this point.

According to him, “Democracy is not an event, but a process to ensure that power is always exercised on behalf of the people by their representatives. It is the political parties that carefully select and present candidates for the electorates to choose from, while the elections present the opportunity for the people to make their choices freely through a free and fair contest devoid of violence, intimidation, hate speeches and blackmail.

“Let me emphasise here that electioneering must be approached with the highest level of decorum and strict adherence to the rules of the game, particularly as enshrined in the constitution, the electoral act and indeed the code of conduct which the political parties freely put in place.

“Electioneering must never be seen as a do or die. All over the world, developed and developing, we see nations making huge successes of their electioneering and Nigeria must not be an exception in this global trend of peaceful and transparent election.’’

The president explained that while it is the right of political parties to freely present candidates to the electorates, the parties must also respect the right of voters to freely make their choice without intimidation and negative inducement, saying his administration was absolutely committed to ensuring that the will of the people prevail and not the will of the elites.

Buhari said the interest of Nigeria is higher than the individual interest of any person or group of persons no matter how highly placed, adding that it is the duty of government to protect and defend the life of every Nigerian while exercising his right to vote.

Meanwhile, the joint meeting of the National Assembly Committee on Electoral Matters yesterday ended in a stalemate as members failed to reach a compromise on the N242 billion 2019 budget proposal of the federal government.

The committee has, therefore, resolved to invite the Chairman of INEC, Professor Mahmud Yakubu, to appear before it again to resolve the stalemate.

The INEC boss, who is appearing the second time within a week before the committee, is expected today by 11am.

Chairman of the Committee, Senator Suleiman Nazif, told reporters at the end of the committee’s close- door meeting, which lasted for one and half hours at Senate Committee Room 328 yesterday that the INEC chairman was being invited again by the committee ” due to a little bit of differences that the committee has discovered in the estimates.”

His words, “We have done what we needed to have done. And we have realised that there are little bit of differences. In view of that, it is the opinion of members of this joint committee that we invite the chairman of INEC for further clarifications tomorrow at 11am.”

The committees of the Senate and the House of Representatives met with Yakubu on Wednesday separately and met jointly yesterday to review his presentations.

Nazif explained, “And today, our duty and responsibility was to try to harmonise what transpired yesterday between both houses and ensure that we cross the t’s and dot the i’s,” recalling that the meeting was called consequent upon the letter of Mr. President requesting for supplementary and virement for the general elections of 2019.

He assured Nigerians, “This joint committee is committed to ensuring credible, free and fair elections for 2019.”

Earlier, two Senate members of the committee were engaged in a shouting match as the joint committee reconvened.

Hardly had the committee resumed sitting when Senator Ovie Omo-Agege (Delta Central) started pushing for the Committee to approve the N189 billion request made by Yakubu.

This position didn’t go down well with Senator Mohammed Hassan (Yobe South) who shouted “nooo” on top of his voice and said the joint committee should recommend the release of N143 billion for INEC as contained in the 2019 Election Budget proposal letter sent by Buhari to the National Assembly in July.

It took the intervention of Nazif for the tension to die down as some other committee members were already on their feet ready to add their voices to the raging issue.

The chairman at this point announced that the meeting would be held behind closed door and requested that the media should vacate the venue.

Some House of Representatives members of the joint committee later joined their Senate counterparts at the meeting. 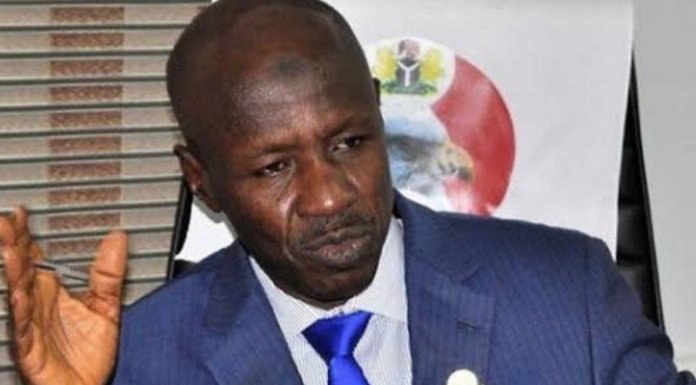