Fellow Nigerians, when I woke up yesterday morning in Lagos, little did I envisage I was going to bump into the ebullient Governor of Bayelsa State, Chief Seriake Dickson. I was heading to breakfast when I ran into the brand new National Publicity Secretary of PDP, Mr Kola Ologbondiyan, on the ground floor of my hotel and I congratulated him on his recent appointment. Thereafter, he informed me of the presence of the Governor and said he was sure Governor Dickson would be delighted to meet with me. I replied that I was fine with that especially as I have close friends who have spoken with great enthusiasm not only about the stellar work that the Governor is doing in Bayelsa State on infrastructure and education but also about his wonderful personality and humility. I went on to have my breakfast. As if well timed and choreographed, the Chief Press Secretary to the Governor, Mr Francis Agbo, walked in and I stood up to exchange pleasantries. He told me his boss would like to meet with me asap. So I followed him to the big manâ€™s suite. Those who know him very well profess that he is not just a giant in physique but also in intellect, hard work, executive management and political engineering.

I met the Governor and some PDP Chieftains having breakfast. The Governor looked very relaxed. We hugged, like old buddies, and he made me feel very much at home. He said he follows my articles with keen interest. I thanked him for the compliment. After he was done with breakfast, he invited me into his bedroom for a one-on-one chat. He was very frank and candid. He said he was in Lagos to reach out to aggrieved members of his Party, PDP, particularly those from the South West who were miffed about not getting the Chairmanship position, as they lost to Mr Uche Secondus from Rivers State. I recalled that he had been similarly assigned the role of brokering peace and facilitating a settlement during the imbroglio for leadership of the Party, that saw former Governors, Senator Ahmed Makarfi and Ali Modu Sherriff, pitted against one another, in an epic battle that went all the way to the Supreme Court, before Makarfi emerged victorious. I am assured that Governor Dickson is not only a peacemaker but a kingmaker.

I fired the first shot. â€œDo you think PDP can bounce back in 2019 now that it seems your convention has produced more bitterness than joy?â€ He responded that he and his reconciliation team would do everything possible to achieve unity in the Party. He admitted that no serious Party can treat the South West like outcasts without getting punished resoundingly at the polls. I was stunned by his revelation. The South West has some of the most enlightened voters in the country. â€œWe need every vote we can get and South West is definitely includedâ€¦â€

I told him that the battle ahead is going to be tough, especially the Presidential election. He agreed with me that PDP would have to field a very strong and formidable candidate against a man like Buhari. He agreed that putting a weak candidate forward would hand over the presidency on a platter of gold to Buhari. Iâ€™m glad that he knows it is not going to be a walkover. We dovetailed into who and who can match Buhari in PDP. He picked them one by one while I gave my analysis and impression of them. â€œWhat do you think of Atiku?â€ he asked. I told him minus the age factor, Atiku is certainly one of the most prepared candidates in the country. Also, he would need to work hard at cleansing the corruption charges levelled against him. And that is not always an easy task. He agreed that Atiku is very experienced and has the wherewithal to run a great campaign.

â€œWhat of Rabiu Kwankwaso?â€ He asked. I was surprised and taken aback by his question which suggested that Kwankwanso who is a well known APC stalwart might be on the verge of crossing over to PDP like Atiku. The rumour mill has been agog with news of such an impending monumental defection and this to me was the first that it might be true after all.Â Â However, I did not bat an eyelid. I merely candidly replied that â€œI like Kwankwaso for one main reason, his performance as Governor of Kano. Iâ€™ve just received a publication detailing his incredible strides in Kano. Iâ€™ve never seen a Nigerian leader with such eye for meticulous planning and execution.â€ The book is titled THERE WAS A GOVERNOR: A COMPEDIUM OF SEN. (DR.) RABIU KWANKWASOâ€™S ACHIEVEMRNTS (2011-2015). According to the book, over 6000 projects were executed. If it is true, then Kwankwaso would be a good material for the transformation of Nigeria from a third world country to a first world nation. I told the Governor such a feat should be replicated nationally and I look forward to meeting Alhaji Kwankwaso very soon to find out about his presidential ambition.

It was obvious that Governor Dickson was picking my brains and I gladly obliged him. â€œ What do you think of Sule Lamidoâ€¦â€ he asked, calmly. I told him Lamido is very experienced but Iâ€™m not sure of his national appeal. He has also been weakened by the incessant and endless harassment of his family by EFCC. The next question was unexpected. It turned out that instead of me interviewing him, he was now the journalist, probing adroitly like the skilled advocate that I am assured he is. He asked about my preferred candidates and I mentioned Donald Duke, Nasir El Rufai, Prof. Yemi Osinbajo, Wasiru Aminu Tambuwal, Oby Ezewesili, Peter Obi, Babatunde Fashola, Charles Soludo, and others. I made him realise in effect that my leaders of today criss-crossed Party lines. For me, these are leaders who know their onions and have proven their mettle, but require proper executive powers to be very effective in steering the affairs of State.

The Governor told me that his dream is to have leaders who would see themselves first as Nigerians and in so doing believe in and commit to the need to develop a country blessed with so much potential without reference to religious or ethnic sentiments. He said he was fortunate to have a dual Nigerian background, as he hails from both Bayelsa and Ogun State. This makes him to feel comfortable wherever he finds himself. He strongly feels that every Nigerian should similarly be comfortable whether or not they have the kind of background that he has.Â Â This can only be accomplished when the entire country is industrialised to such an extent that infrastructural facilities abound everywhere to generate, employment, income and growth.

He is very excited about his governmentâ€™s policy on education. As far as he is concerned, no stone should be left unturned to educate the people, because it is only from sound minds that the kind of vision and dedication necessary to take Nigeria to the level that it should be, can come. This is why he and his government have invested greatly in the youths through education and one of his proud achievements is the link with Lincoln University in America where the State has more than 20 students studying various disciplines.Â Â Indeed history was made earlier this year when a Bayelsan, Perewari Victor Pere distinguished himself as the best graduating student of that University and was honoured with the status of Valedictorian and delivered the valedictory at the Universityâ€™s commencement.Â Â The Governor stated that he felt proud to be a Nigerian on this accord and considered this a vindication of his education policies. He believes that investment in education will pay off eventually.

In concluding our chat, he told me that no matter what happens, PDP will get its groove back. For him, it was necessary to ensure not only the stability of the polity but also to institutionalise our democratic mores and structures. Whilst, I have no evidence that this will happen soon, I agree that Nigeria does not need a one-party State. As to the PDP bouncing back soon, I can only say that in Nigeria, nothing is impossible.

How time flies indeed. Ten years ago, we decided to start a project that would promote our young and talented artists. It was anchored on the spirit of Christmas as we felt that it was our opportunity to create a platform where we would not only give something financiallyÂ Â to worthy causes but we would also transform the lives of artistes in music, fashion, comedy and the performing arts generally. We decided to call the event Ovation Red Carol and one of the first decisions was that it would be a fun event and free to all.Â Â It all started like a joke but today it has really caught fire. The event is now not only watched live in Nigeria, it is televised and streamed all over the globe.Â Â It is based on our belief that in all things, technology must take the forefront and we must show that Nigerians and Nigeria are advanced despite out other shortcomings.

Apart from being a launch pad for various young talented artistes, and showcasing some mega international and domestic performers over the years, the event has become an annual entertainment jamboree which people look forward to, even before the current one ends.

It is gratifying to note with all sense of humility and modesty that people have congratulated us at Ovation for pioneering this kind of event on the grand scale that we have, as this is now being replicated in many parts of Nigeria.

We have been fortunate to have very good partners in this venture who have supported us with their time and resources.Â Â They transcend every area of our national endeavour and we consider ourselves and the nation truly blessed. All those that have shared the adventure with us are important and dear to us but we cannot but mention the spectacular efforts of our first sponsors, versatile international bankers, UBA, and lately,Â international telecommunications giant,Â Glo. This year we also have had the honour and pleasure of including the Esther Ajayi Foundation in the list of those we are working with in order to continue engendering a special Christmas occasion for our teeming supporters and the generality of the Nigerian populace.

Â We are grateful to everyone for their support and participation in this grand project and pray for God to bless us all in this Christmas season. Thank you very much. 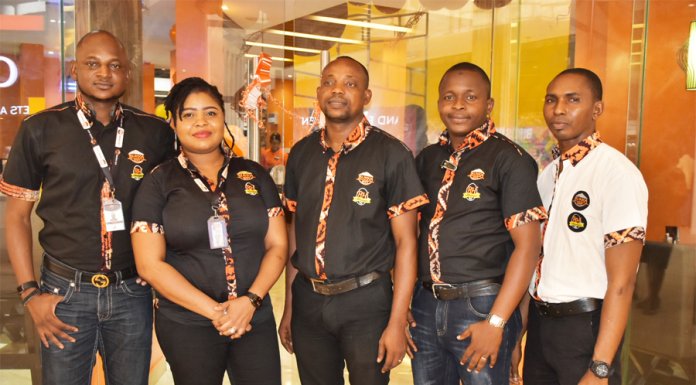