The bank said in a statement that the product was specifically designed as a platform to execute a key aspect of its service level agreement for the NIRSAL-Unity Bank channel partnership to bank farmers in rural areas.

This is as Sterling Bank Plc revealed on MondayÂ that no fewer than 22,000 farmers in Kebbi State are to benefit from the Central Bank of Nigeria’s Anchor Borrowers Programme (ABP) aimed at increasing the cultivation of rice in Nigeria. The loan anchored under Nigeria Incentive-base Risk Sharing System for Agriculture Lending (NIRSAL) would be disbursed to beneficiaries by Sterling Bank.

NIRSAL was borne out of the efforts of the central bank to increase the disbursement of the ABP to more farmers at the grassroots level and the product was conceived to expand and capture more states of the federation to benefit from the scheme.

Commenting on the product, the Head, Agribusiness, Unity Bank, Mr. Olugbenga Emmanuel Adelana, said: â€œA total of Seven states – Kebbi, Jigawa, Zamfara, Adamawa, Kaduna, Kano and Bauchi and over 9000 small holder farmers have signed on to the scheme when the pilot of the Channel Partnership Agreement (CPA) first came on stream.

â€œThe success and the need to grow the number of Farmers benefiting from the scheme in other states of the federation have therefore given rise to the development of NIRSAL Farmers Savings Account.â€
The Unity Bank official disclosed that a owing to this development, a memorandum of understanding and Service Level Agreement on the implementation of the Channel partnership had been approved and signed by the bank and NIRSAL.

â€œUnity Bank Plc, being a niche player in Agricultural financing in Nigeria, with active participation in most government intervention schemes and support for key policy initiatives to drive growth and transformation of Nigeriaâ€™s Agricultural economy, has provided this platform to execute a key aspect of the service level agreement for the NIRSAL-Unity Bank channel partnership,â€ the bank added.

For Sterling Bank, its Head of New Business Sales, Adewale Adebowale said each beneficiary would get N250,000 loan. He said the loan would cover the cost of preparation and supplies of farm inputs needed for rice cultivation within their localities.

“What we need is the update of the remainders using our mobile Bank Verification Number (BVN) machine deployed to the field. As we engage the farmers we issue debit cards to them,” he explained.
He also said an Extensive Agent Network (EAN) has also been put in place to ensure that farmers in the rural areas have urgent and easy access to their loans without using the Automated Teller Machine (ATM).
According to him, the aim of the bank is to ensure the funds provided to the farmers are properly utilised.

“At the end, what we want to achieve is that the funds are properly utilised. The transaction dynamics are fast and the access to the funds is guaranteed to ensure that farmers have good yields at the end of the farming session,” Adebowale assured. 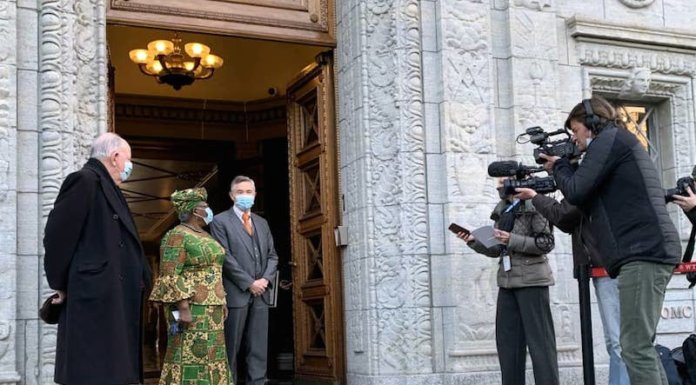