A Nigerian Company, Environ-Aid Technologies Limited has accused the Federal Bureau of Investigation (FBI) and the United States’ (US) House of Representatives Committee on Judiciary of ignoring letters of complaint it sent against one Jim Daniels-Nnah and his firm, Biowish TM Africa Limited.
Enviro-Aid had in 2014 sent letters to both agencies accusing Daniels-Nnah of $35,000 fraud.

The firm wondered why the US was yet to respond to their letters or take actions three years after they sent the petitions, alleging that Daniels-Nnah had acquired properties including luxury cars and homes from the loot.
According to the letters signed by Environ-Aid’s Chairman, Chief Chris Iheanacho, US based Biowish fleeced the former in 2012 under the guise of supplying and delivering some chemicals for environmental remediation.
Titled “complaint of stealing by conversion and obtaining of money under false pretences: petition against Biowish TM Africa Limited and Mr. Jim Daniels-Nnah,” Iheanacho chronicled events that led to the alleged crime.

He said between September 2012 and February 2013, Environ-Aid carried out some business transactions with Biowish, whose office is located at 66, Aminu Kano Crescent, Wuse II, Abuja, adding that they dealt directly with Daniels-Nnah, the chairman of the company.
Iheanacho said they were made to understand that Daniels-Nnah was either a US citizen or a person with a permanent resident status there and resided at 5064 Cedar Creeks, Houston Texas, 77056.
He said: “Daniels-Nnah had claimed he had an ongoing relationship with Procter and Gamble in the US and that he was going to obtain these chemicals from them and deliver to us but we are yet to receive them till date, despite our various demands and reminders to that effect.

“The sum of $350,000 was transferred to Biowish TM Africa Limited offshore account 2531597594, BBVA Compass Bank, Houston Texas in three tranches of $150,000, $150,000 and $50,000 onÂ October 16, November 6 and December 12, 2012, respectively. These payments were made through our sister company, Enercon Nigeria Limited.
“Following the deliberate refusal of Biowish TM Africa Limited and Daniels-Nnah to deliver the said chemicals to us or even present to us any evidence of shipment for them, we proceeded to terminate our agreement with them and requested for a refund of the $350,000 which Daniels-Nnah also refused to pay…
“We are concerned that Daniels-Nnah is using his legal status in the US to evade justice by hiding under the shield of another country and refusing to honour the Nigeria Police’ invitation for an interview.

“It has also come to our knowledge that shortly after we transferred the $350,000 to Daniels-Nnah, he went ahead to acquire some exotic motor vehicles and also an expensive real estate in the US. We fear that he might have misappropriated our funds for these purchases, hence, his inability to refund the money to us.
“We believe we have been scammed and Daniels-Nnah believed that he is untouchable because he is in the US. We urge you to kindly use your good offices to launch an investigation into this matter with a view to enabling us recover our $350,000 and ensure that Daniels-Nnah is made to answer for his crimes.”

The Nigerian government through the Attorney General of the Federation (AGF) and Minister of Justice, Abubakar Malami (SAN), had requested the extradition of Nnah.
The request which was contained in a letter marked HAGF/Ext/08/14, was made pursuant to the provisions of the extradition treaty between the governments of the USA and United Kingdom (UK) of December 22, 1931, which is applicable to Nigeria.
However, a report attributed to his lawyers, Okoye & Partners, alleged that Iheanacho did not meet up with a fee of $500,000 which was agreed upon as the fee for distributorship of Biowish products in Nigeria, adding that he only paid $350,000.
The law firm said it was agreed that Iheanacho be refunded the $350,000 paid in the form of products of equivalent value.

It said: “Due to the regulated nature of the products, they could not be imported without approval from the National Agency for Food and Drug Administration and Control (NAFDAC), which application process was delayed due to Iheanacho’s companies being unable to provide proper warehousing.
Already, the Attorney General of the Federation, Abubakar Malami, has filed for the extradition of Daniels-Nnah.

“As at August 2013, NAFDAC approval had been obtained and the products shipped into the country. Iheanacho was required to place an order, indicating which specific products he required out of the myriad bouquet. Instead of doing this, Iheanacho tried to use the police to arm-twist our clients into giving him distributorship for which he could not afford to pay.” 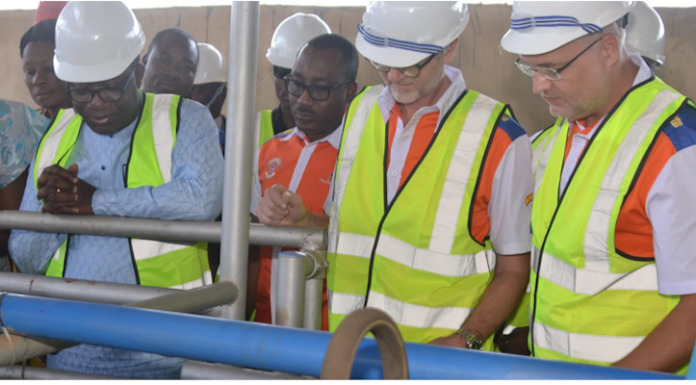 Nothing Wrong in Dialoguing with Bandits, Says FG

Edo Govt Not Ceding Any Land to Herdsmen, Says SSG