The need to ensure that engineering enhances the socio-economic development of the African continent and prepares students and the citizenry for knowledge economy underpinned by science, technology and innovation, was the focus of the third African Engineering Deans’ Council (AEDC) 2017 summit, which held recently, at Covenant University, Ota, Ogun state. Funmi Ogundare reports

The summit themed, â€˜Engineering For Socio-Economic Development of Africaâ€™, seek to increase synergy, collaboration, networking and partnerships among Engineering deans, professors, educators, policy makers and captains of industry in order to catalyse the growth and advancement of engineering education in Africa.

The Chancellor of Covenant University, Dr. David Oyedepo who declared the summit open enumerated the challenges confronting humanity, saying that engineers must take responsibility to address them.

â€œMost developed countries in the world begin with engineering , it is the core of any meaningful development. Engineering is moving from what it used to be, to innovation, and trying to catch up with what is needed today using present day technology, â€he said

The President , Global Engineering Deans Council (GEDC), Dr. Peter Kilpatrick McCloskey said Africa needs engineers to innovate and lead to solve pressing challenges of income inequality, sustainability, energy , water, housing, food and employment for billions of people who will need to be served over the next 30 years.

â€œIf engineers do not lead in these endeavours, which will require great technological innovation and skill, who will?,â€ he asked, adding that it is also imperative that students are trained and motivated to serve their countries and the people.

â€œWe need to start training engineers to become employers that will transform the society and also understand how we can help create the leaders that Africa needs for the 21st century,â€ he said.

Earlier in his keynote address, former President and Chairman AU, Chief Olusegun Obasanjo stressed the need for Nigeria to increase investment in higher institutions of learning to produce engineers that will be job creators rather than job seekers.

He said the leaders must also understand what it takes to keep tab with the 21st century and reform engineering education while supporting research for best practices.
He however expressed concern that our society is experiencing serious deficit due to the dearth of the will to come together and seek ways of working solutions to our problems without any political undertone.

According to him, “the engineering curriculum of the 20th century is no longer sufficient to address the engineering challenges of the 21st century. Certain engineering competencies such as problem solving, design and analytical thinking have become essential.”

He recalled that in many parts of Africa, young engineers have not been trained for specific roles in the industry saying, “we have to teach them to convert the technical knowledge acquired into useful artifacts that are needed in the industry and to learn also how to transform manufactured products into viable business ventures.”

Obasanjo argued that women are under-represented in technology and engineering careers in most industrialised countries around the world, as well as admission into the programme in tertiary institutions.

â€œThe image of engineering as a masculine profession has reproduced the perception that engineering is unsuitable for women. While various strategies have been used to try to increase the number of women entering engineering education and employment, their success has been limited.â€

The President AEDC, Professor Adagboyin Obiazi noted that a Memorandum of Understanding (MoU) will be developed with defined structures and framework for implementation that will foster synergy, partnership and win-win collaboration between the academia and industries.

According to him, â€œthis will surely turn things around and create the required impetus and momentum for industrial growth, research funding and national development. It is our firm hope that the successful implementation of the MoU will become a model to be replicated across the African continent.â€

The President of COREN, Mr. Kashim Ali affirmed that engineering is very essential to improving human livelihood, while expressing concern that Africa currently lacks the critical mass of graduates in scientific disciplines.
â€œStatistics show that there is one or less scientist or engineer per 10,000 people compared with 20 to 50 in the industrialised countries. This ratio, if calculated for technicians and artisans is even worse. This is the reason why COREN became concerned with the dearth of technical education in Nigeria within the last decade.â€

As engineers, he said the council has a collective responsibility to improve the quality of living around Africa and the world, adding that teachers of engineering have greater responsibility to impact the basic knowledge that would ensure continuity for the 21stcentury.

While pledging his councilâ€™s commitment to support Africaâ€™s progress towards the attainment of socio-economic development objectives, Ali said, â€œit is my hope that as we look at engineering and African development, this workshop will be a contribution to the process of addressing challenges and identifying opportunities for constructive, creative and positive engagement of the huge engineering human resources in Africa.â€

The Executive Vice Chairman and Chief Executive Office of the Nigerian Communications Commission(NCC), Professor Umar Danbatta who described the engineering sector as the bedrock of many other sectors, said it plays a prominent role in contributing to the Gross Domestic Product (GDP), but expressed concern that a major challenge for developing countries is in preparing the citizenry for knowledge economy; a world where technology dominates and activates every aspects of life.

“Engineering educators must take a closer look at how its students are being prepared to enter the real world. Current graduates will be called upon to make decisions in a socio-geo political environment quite different from that of today. Artificial intelligence and robotics are a reality today, cars drive themselves, drones master the airspace, every equipment is â€˜smart and cognitiveâ€™, and everything is getting inter-networked with everything,” he said.

He stressed the need for the council to collaborate with manufacturers, vendors, innovators, operators, among others so as to develop an enduring engineering curricular and policy that will place the continent at the same pedestal as the developed world.

The Secretary General of Committee of Vice Chancellors of Nigerian Universities (CVCNU), Professor Michael Faborode who emphasised on achieving effective research and innovation, said there must be a collaboration between the industry and the university, adding that agencies must be set up to ensure that the products and patents impact and change lives.

â€œWe must all realise that there is a challenge which must be solved. Universities must take research seriously, they must be adequately funded and accorded the needed recognition and challenged to deliver on their mandate, â€ he said.
The Chair, Local Organising Committee(LOC), Covenant University, Professor Christian Bolu told THISDAY that the council would work within the framework of the African union to solve African problems, as well as improve on the curriculum so that the students being produced will be relevant for the industries.

Asked what the summit would achieve at the end of the day, he said, â€œwe have started achieving them, we have got the attention of AU through the chairman who has invited us to Conakry for us to discuss further. We have also gotten the attention of former President Olusegun Obasanjo and the vice chancellors. We also need to get the involvement of Nigerian manufacturers and organised private sector; and set up the structure for us to collaborate, and use the model for Africa.â€
He said the committee will work on making its curriculum to be Outcome Based Education (OBE), in order to benchmark it for international best practices.

â€œThe former president has said it that our curriculum has been accepted in large numbers of areas. The only area we are trying to work on is to make our curriculum to be outcome based education.â€
Bolu described its quality of engineering graduates as good saying, â€œthat is why we are meeting with manufacturers to be able to understand their requirements and see whether we can change or modify our curriculum for it to be useful.â€

Asked about the role the industry plays in the training of engineers, the Chair said, â€œit is to provide the information that is required for us to train people and provide the platform where students can get hands-on experience.â€

On how exposed the lecturers are to practices in the industry, he said, â€œour lecturers need to get in touch with the industry and see the way they do things and come back for the training.â€
The programme witnessed a brief award ceremony where plaques were given to former President Olusegun Obasanjo for being an â€˜Achiever in Engineeringâ€™, President of the Republic of Guinea, Professor Alpha Conde for being the â€˜Champion of African Renaissanceâ€™.

Others are the Chancellor of Covenant University, Dr. David Oyedepo for â€˜Restoration of the dignity of the black manâ€™, the Executive Vice Chairman and Chief Executive Office of the Nigerian Communications Commission(NCC), Professor Umar Danbatta for â€˜Africa Outstanding Achiever in Communicationâ€™, as well as Nigerian Society of Engineers(NSE) for being â€˜Africanâ€™s Ground breaker in Engineeringâ€™. 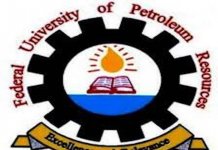 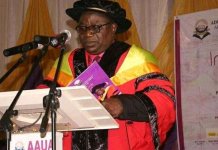 Amotekun and the Politics of Security