A former Deputy Speaker of the House of Representatives, Hon. Emeka Ihedioha, believes that following the Supreme Court ruling on the Peoples Democratic Party leadership, the self-acclaimed largest party in Africa is on the part of rebirth, urging members who have gone astray to humbly return to the fold. Ihedioha tells Onyebuchi Ezigbo about steps being taken by the party to regain its lost glory come 2019

Following the Supreme Courtâ€™s ruling, the Peoples Democratic Party has made a â€˜no victor, no vanquishedâ€™ declaration. What does that mean to you?
The national chairman immediately after the judgment made the statement â€˜no victor, no vanquishedâ€™ in the spirit of accommodating differing views. In my understanding, well-meaning party members who may have gone astray in the struggle to keep the party united. However, it is the thinking of the majority of the members at all level that if any olive branch is given to you, you shouldnâ€™t mistake it for a right to continue to misbehave. We want to correct our mistakes and avoid going back to the inglorious past.
In my thinking if you are getting back to the fold of the faithful, the believers in the party and its ideas that means that you have to be born again. Born again to the extent that you will conform yourself to being a disciplined party member prepared to work with others with the objective of working towards our victory in 2019 and in any subsequent election so that we can get back to winning ways. The party has mandated that two committees should be set up: a disciplinary committee and a reconciliation committee.

But the spokesman to the sacked Ali Modu Sheriff-led leadership, Bernard Mikko, said they would insist on taking the party back to the people, and away from acts of imposition.
Who said so?

The Sheriff camp
How can you say Sheriff said so? Sheriff personifies impunity and imposition. Sheriff doesnâ€™t believe in democracy. Are you aware that Sheriff was in the process of reconstituting the National Caucus of the party single-handedly without consultation with the NWC, even the Board of Trustees? He wanted to dissolve the Board of Trustees with powers that he doesnâ€™t have. He never believed that his colleagues in the NWC had the right to participate in leadership. We have gone through this regrettable experience for a period of about 16 months and I think we have learnt our lessons the hard way and God has offered us the opportunity to show remorse and begin anew.

The PDP has said it would embark on constitutional amendment. As the chair of that committee, can you give the key highlights of this amendment and how you think it can help the party to forge ahead?
I am a process person. I had the privilege of being appointed by the party to chair an ad hoc committee on review of our constitution and I think we need that. I think we did a very extensive work, in my opinion and perhaps for the first time in the history of our party we had time to get well-experienced, knowledgeable members of the party to sit in for a period of about two months to look at our constitution to do an extensive review and then ask critical questions particularly looking into areas where there are perhaps ambiguity or perhaps where we have been led us to make costly mistakes and then to put things right. We looked at functions of officers in the party, mode of electing officers, mode of running the party and the size of the executive committee at various levels and content of those committees. We have also looked at certain special interests in the party and how to accommodate them. We have been yearning for greater participation of youths in the affairs of the party. We took all that into consideration and made recommendations.

What has happened to the issue of direct primaries as recommended by the post-2015 election review committee headed by the Deputy Senate President, Senator Ike Ekweremadu?
Everything is still a proposal. We have looked at the challenges we had as a party. We have looked at the implication of getting into direct primaries and we are working towards it and it could be a possibility any day and we feel that if it becomes a possibility we have to get our acts right. We have to for instance, ensure that there is the right database of membership and that we can establish, for example, in my ward that this is exactly the number of people we have. We must have a way to ensure that those party members are card-carrying members and we have to identify that so that we donâ€™t have issues and crisis in the course of our primaries. We are taking our time. However, we believe that there should be a procedure in achieving that and this procedure we havenâ€™t sorted out and we believe that at some point in time we will get there.

Do you think the PDP has a good chance in winning in 2019 general elections?
Yes. From the timetable of INEC, elections will begin February 2019. Our problems came at the right time and we are solving them at the right time. We canâ€™t be distracted any further and now we must begin to look at what to do to give Nigerians the real alternative. We are also convinced that Nigerians have seen the change offered by the APC. Destitution has become the other of the day in our country. Crime rates are increasing, mortality rate is high, and unemployment has now become part of our national life. We have yet to see the job creation programmes of the present administration. Nigerians have said this isnâ€™t the change they voted for and so in rebranding PDP, which we are doing, we will offer Nigeria the alternative and so we are very conscious that with our experience that the dividends will get to Nigerians when we are in power we will be a party ready to give Nigerians the government of their choice, the government of their desire come 2019.

Do you think the National Assembly has what it takes to effect the kind of restructuring that Nigerians desire?
I am not a member of the 8th Assembly. Unfortunately, most Nigerians donâ€™t appreciate the process, the procedures of the practice of democracy. Members of the National Assembly are elected as representatives of the people. That is to say in our respective constituencies the channel of presenting our desires should be through our elected representatives. You have a duty to relate and interact, scrutinize the activities of our members, present to them our desires for them to speak for us. When people talk about organising a referendum, how do you organise a referendum? Is it the INEC that will organise a referendum? How are you going to implement that? Are you going to use your traditional outfits or INEC to carry out referendum or what? How would you achieve it? Our best process, our best method, our best bet is to use the legislative powers. Get the people that represent us to streamline our issues and say these are the things we need to. I am sure if we channel our thoughts properly, the legislature will give a favourable consideration to the desires of Nigerians.

Some people have also said restructuring will likely define the direction of 2019 elections. What do you think?
Who is going to use that to campaign? I donâ€™t think that in the 2019 general elections we will have any political party that will secure any of the majority in any of the chambers of the National Assembly with the way I am looking at things right now. I believe we are going to have competitive elections in 2019 and so I always dwell on building a national consensus. In the 7th Assembly, irrespective of differences we had in political parties, we pursued the national course and when we began the process of constitution amendment if you can remember we introduced what we considered to be novel in those public sessions where we sent all our members to the respective constituencies and we brought out a template to reach out to Nigerians across the divide; to the traders, to the teachers, to the clergy, to the common man, to the traditional institutions and we urged them to look at it. We scrutinized their feedbacks and the House of Representatives came up with those articulated positions which contained the desires of Nigerians. We look at what they had wished for, we voted on all issues and that 7th Assembly concurred with the desires of the Nigerian people in all places. It is unfortunate that from no fault of the National Assembly that constitution wasnâ€™t signed. If it was signed into law it would have captured the aspirations of Nigerians. So I think we should begin to do things right.

What is your assessment of whatâ€™s happening in Imo State chapter of the PDP?
The national partyâ€™s NEC mandated all state branches to set up disciplinary and reconciliation committees in line with what we are doing at the national level and so Imo is a component part of the Nigerian federation. Of course, in terms of party structure, Imo PDP is also a component part of the PDP national and so I believe the party leadership will do what is right. Anybody struggling for leadership with our popularly elected party chairman, Charles Ezekwem, is taking a political risk. To the glory of God, one thing we have achieved in Imo PDP is that today nobody, no one person owns either the state or local government party structure because we insisted and ensured that the process be democratised. Those whose business was hijacking party structure are today out of business. The people have been liberated.
I believe the doors of the party are open to those genuinely interested in PDP. Now, everyone should go back home; go back to their wards, go back to your local government and rebuild the party. You donâ€™t just come and say you are a leader. You can only lead your people from the base. What makes the party strong will be the combination of efforts of various wards and local government areas and I belong to a ward and a local government area and efforts should be concentrated on these areas in rebuilding our party. I think it is a time for self-examination. It is a period for us to ask ourselves certain questions and get back to winning ways in the nationâ€™s elections. 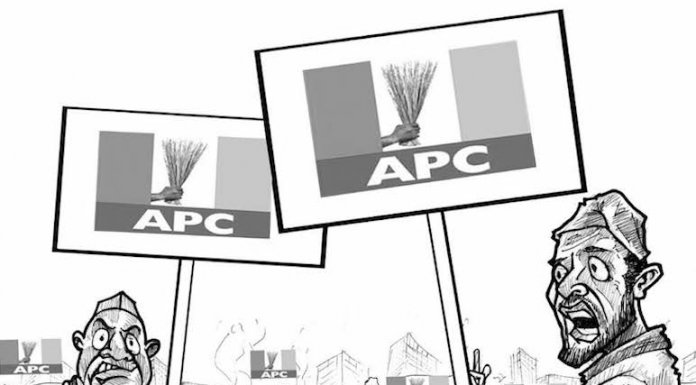