The National Assembly saturday denied that it underhandedly injected extraneous items into this yearâ€™s budget of the Ministry of Works, Housing and Power. The Senate accused the works, housing and power minister, Babatunde Fashola, who made the allegation, of â€œspreading wrong information and half-truth,â€ and the House of Representatives labelled his allegation â€œvery misleading and calculated mischief.â€

Fashola had alleged on Thursday in Abuja that the National Assembly inserted into his ministryâ€™s budget projects outside its purview after the financial plan submitted by the presidency had undergone public hearing and defence by the executive. He said projects such as primary healthcare centres and boreholes had been unfairly introduced into the ministryâ€™s budget. The minister also alleged that the legislators had cut funds from major projects, like the Lagos-Ibadan expressway, Second Niger Bridge, Okene-Lokoja-Abuja road, Manbila power project, and the Bodo bridge, which links the Nigeria Liquefied Natural Gas station, without due process, and diverted to their constituency projects.

But in their separate responses yesterday, the two chambers of the National Assembly said they merely ensured the equitable distribution of projects across the country, and insisted that they acted within the powers of the legislature.

In a statement by its spokesperson, Senator Aliyu Abdullahi, the Senate said Fashola flouted extant laws and agreements on the Lagos-Ibadan expressway by voting funds for the project, which was already being executed under a public private partnership arrangement. Abdullahi said the Bureau of Public Procurement and the Federal Executive Council had in 2013 approved the reconstruction, rehabilitation and expansion of the expressway as a PPPP project using the private finance initiative, with the government providing 30 per cent of the funding and the private sector contributing the balance.

“Even as at last year, the 2016 Appropriation Act voted N40 billion for the project on the insistence of the ministry and only N26 billion was released. If we had known, the rest N14 billion could have been allocated to other critical roads across the country,” the chairman, Senate Committee on Media and Public Affairs, said.

He added, “In the spirit of consensus building and effective stakeholder engagement, the leadership of the Senate met with relevant stakeholders, including the ministries of works and finance. It was agreed that we should give the private finance initiative a chance to complement governmentâ€™s resources in the delivery of critical infrastructure assets across the country. Hence, in this year’s budget, we have engaged with the government and private sector groups who have assured that they will resume funding of the project. So, we only provided the fund in the budget that would ensure work does not stop before the funds from the private sector start coming in.

â€œWhat we reduced from Lagos-Ibadan expressway in the 2017 budget estimate was spread on Oyo-Ogbomoso road in the South-west, Enugu-Onitsha road in the South-east, and two other critical roads in the North-east and North-west; and this was done to achieve equity. The minister should realise he is minister for the entire country and not just that of Lagos State.

â€œIt is our view that the federal government cannot fund the reconstruction and maintenance of all the 34,000 kilometres of roads under its care. We are looking for private funds for some of these roads, particularly, those with high potentials of attracting private investors. These include the Enugu-Onitsha road, Kano-Abuja road, and Abuja-Lokoja road. It has been our hope that the Lagos -Ibadan road would be a model for private sector funding of infrastructure in the country.”

Abdullahi said it was deceitful for Fashola to promise that the federal government could fund the Lagos-Ibadan road to completion by 2019.

â€œHe should desist from spreading half-truths,â€ the senate spokesman said regarding the minister, adding, â€œWhen he said the National Assembly imported projects into the 2017 budget, he did not mention that these include the 26 projects which the federal government approved in the 2016 budget, awarded contract for them in January 2016, but totally omitted them in the 2017 budget. One of them is the Abuja-Kaduna road. These ones would have become abandoned projects. We reduced funds across board to make provision for these omitted projects that are of critical importance to the socio-economic development of the country in line with equity and fair play.â€

Abdullahi accused Fashola of frustrating private sector financing initiatives due to the allure of contract award. â€œThat was why he waited until he was arm-twisted on the Lagos airport road before he allowed the Lagos State Government take up the reconstruction, using private funds. Same thing happened to the proposal for the Apapa wharf road, which was frustrated for over a year before the stakeholders reined in the ministry to grudgingly approve that Dangote and Flour Mills should take over the project,â€ the senate alleged.

Abdullahi stated, “It should also be explained that nobody introduced budgetary provisions for the sinking of boreholes and construction of clinics under the budget of the works division of the ministry. However, the housing division would ordinarily have provision for such facilities in its estimate, so as to meet the Sustainable Development Goals as provided for by the United Nations.â€

He said the National Assembly already had an arrangement with the acting president, Professor Yemi Osinbajo, to fund projects that could not attracted needed private sector finance through Virement and supplementary budget.

â€œHowever, with all these blackmail game and backbiting going on, they are already laying the foundation for the failure of the agreement with the executive,” he stated.

Expressing the position of the House of Representatives, the chairman of House Committee on Media and Public Affairs, Abdulrazak Namdas, said Fasholaâ€™s comments about alleged alterations in the budget was an attempt to blackmail the legislature and portray it as insensitive to the Nigerian people. Citing recent court pronouncements, Namdas said the legislature had powers to make alterations in the appropriation bill presented by the executive.

Namdas said in a statement by his special adviser on media, Hassan Turaki, â€œIt is very misleading and calculated mischief to simply say that N5 billion was taken from the budget for Second Niger Bridge. The truth is that in the 2016 budget, N12 billion was appropriated for the Second Niger Bridge and not a kobo was spent by the ministry. Not a kobo. The money was returned.

He said the National Assembly had to intervene to fund some critical roads that were neglected in the budget proposal.

The House spokesman reiterated that there was a PPP arrangement on the Lagos-Ibadan expressway. He added, â€œOn the Mambila power project, the minister proposed a whopping N17 billion for only Environmental Impact Assessment. The National Assembly felt that N17 billion for EIA was misplaced and patently unjustifiable! The minister himself even wrote to the National Assembly to move some funds from this sub-heads to others.”

Namdas stated, â€œOn a general note, we need to remind the Honourable Minister that the budget of the Ministry of Power, Works and Housing is not his personal budget; it is part of the budget of the federation. The National Assembly and others are also stakeholders in this country, imbued with patriotism to fix Nigeriaâ€™s problems. There are certain matters, which the National Assembly committees discover during oversight activities that are corrected during the budget process.â€ 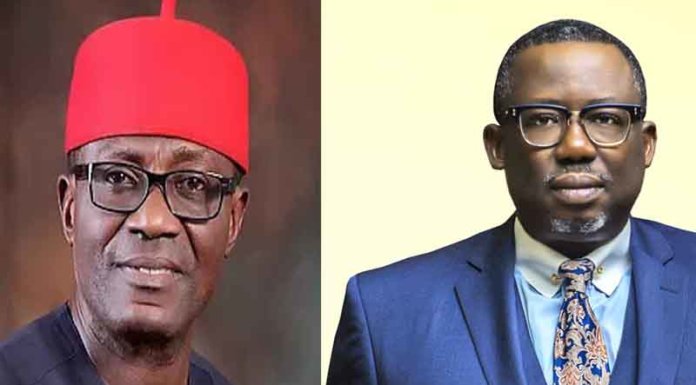