The intrigues so far trailing the bye-election to replace the late senator representing Osun West senatorial district, Alhaji Isiaka Adeleke, are indicative of the undercurrents that could ultimately show the shape next yearâ€™s governorship election in the state would take. Yinka Kolawole writes

The issue in the bye-election for Osun West senatorial district is how the Peoples Democratic Party (PDP) dramatically and unanimously picked the younger brother to the late Senator Isiaka Adeleke, Demola, for the July 8 bye-election in Osun State. Demola Adeleke emerged the PDP candidate with 343 votes, when former Minister of Youth and Sport, Senator Akinlabi Olasunkanmi, and Lt. Col. Olayiwola Talabi (rtd), stepped down for him.

However, at the All Progressives Congress (APC) primary held at Egbedore Local Government Council area of the state, the sole aspirant, Senator Mudashir Hussein, also won the primary with 2,412 votes from 2,413 delegates.

For the PDP, Adelekeâ€™s emergence became possible, when two other contestants for the ticket, Olasunkanmi and Falabi stepped down for him. Adeleke had earlier been screened and given clearance by the APC screening and election committee while Senator Mudashiru Hussein, the choice candidate of Governor Rauf Aregbesola, was disqualified. The national working committee of the party later upturned the report of the appeal committee, which stood by its disqualification of Hussein, following interventions from powerful quarters, both in Lagos and Abuja.

Thus, upturning the decision of the screening and appeal committees by the NWC gave Ademola some suspicion that the primary might not be as credible and transparent. He therefore approached PDP to run on their platform and he was subsequently screened and cleared less than 24 hours to the partyâ€™s primary.

According to him, the party was promised that Osun West would produce the governorship candidate for the party next year and that he was stepping down in the partyâ€™s interest and not for Adeleke.

Interestingly, Falade had emerged the Social Democratic Party (SDP) candidate before his defection to PDP as well as Adeleke who had emerged the unopposed candidate of the APC as soon as his co-contestant, Hussain, was disqualified by the APC screening and the appeal committees.
But after several interventions, Hussain was eventually cleared by the NWC of the APC hence the reason Adeleke left the party.

In his resignation letter made available to THISDAY by the Attorney General and Commissioner for Justice in the state, Ajibola Bashiru, Adeleke said his resignation was due to lack of trust in the party.

â€œI am constrained to take this decision due to the obvious manipulations by political godfathers and power brokers that created the cloudy and controversial circumstances that led to the mysterious re-qualification of a candidate that was disqualified at two levels of the partyâ€™s screening committee.

â€œEqually important and unacceptable is the fact that the party has chosen to conduct the primary in Osogbo instead of Iwo, the senatorial district headquarters, thereby exposing the process to potential nullificationâ€ and therefore reiterated his lack of confidence in the outcome of the primary saying, â€œa manipulated process will only lead to a manipulated outcomeâ€.

In its reaction, the APC said, â€œWe received a letter, conveying the decision of Otunba Ademola Adeleke to withdraw from the primaries being conducted in which he is slated to contest as a candidate for the position of Senator for the Osun West Senatorial District, on the platform of the All Progressives Congress.

â€œHe claimed he based his decision on two grounds: what he termed as obvious manipulations and interference by political godfathers and power brokers that created the cloudy and controversial circumstances that led to the mysterious re-qualification of a candidate that was disqualified at two levels of the partyâ€™s screening process.

â€œHis grouse with the non-use of Iwo for the election, because he takes it the headquarters of the Osun West Senatorial District; he also tied the withdrawal of his candidature to his total resignation from the APC.â€

Addressing the issues, the APC said Adeleke had been riding on mischief all along, concocting false and irrational explanations as a subterfuge for his failed attempt to destabilise the party in the state.

The APC noted that, it was obvious that Adeleke was not conversant with the processes for the nomination of a candidate to contest an election in our party. Contrary to his erroneous claim of obvious manipulations and interference, paragraph 16(d) of the 2014 Guidelines for the Nomination of Candidates for Public Office makes it clear that the National Working Party (NWC), acting on behalf of National Executive Committee (NEC), is the ultimate authority on the qualifications of candidates to contest a primary election.

This is more so if an appeal is lodged by any aggrieved aspirant or candidate. Therefore, the decision of the NWC cannot be seen as manipulation, as this has been the standard practice of our great party since its formation. The APC further said the claim that the primary was not being held at the Senatorial District headquarters was baseless.

â€œFor one thing, there is no such thing as a senatorial district headquarters in the 1999 Constitution. As such, there is no provision either in the Constitution of the APC or the 2014 Guidelines for the nomination of candidates for public office that the primaries must be held at a particular venue.

â€œFor example, the presidential primary in 2015 was held in Lagos. It could have been held in Osogbo or anywhere else in the country. Consequently, the available records now reveal that Otunba Adeleke was never a member of APC in the state, as there is no evidence of his registration as a member in his Abogunde/Sagba Ward 2 in Ede North LGA.

â€œThere are also no records of his involvement in party meetings at all levels. Rather, there is a petition, dated the 9th day of June, 2017, which was to the effect that Otunba Adeleke was not a member of the APC. At best, his only affiliation with the party was his occasional appearances with his late brother, Senator Isiaka Adetunji Adeleke, at party functions, particularly the campaigns.

â€œThe fact that he was a member of the Adeleke family therefore cannot and does not confer membership of the APC on him. This is like the case of Fadeyi Oloro, a popular Yoruba artiste, who always attends APC functions, without being a member of our great party.

â€œIn any event, at the Security Stakeholders Meeting held just yesterday, where Otunba Adeleke was represented by his brother, Dele Adeleke, he did not object to the arrangements for the primary, but rather concurred with the outlined procedure, including the venue, security and logistic arrangements.

â€œAs such, the purported withdrawal and resignation of Adeleke was therefore, an afterthought as well as an admission of his obvious weakness to confront a formidable opponent with massive grassroots support. APC Osun cannot be blackmailed by an opportunist and upstart, who was committed to stealing our mandate to the detriment of loyal and committed members, who have toiled and sacrificed to build a formidable party of choice in the State of Osun and the country at large.

Final Analysisâ€¦
Drawing from this development, it is good for parties to stand by their people at difficult times, but importantly, the power play that trailed the emergence of the two candidates for the election are some of the undercurrents to watch out for as Osun looks forward to another governorship election next year.

Suffice it to say that it was Husain, who, in 2015, voluntarily relinquished the same seat being contested to the late Isiaka Adeleke, after having won with a landslide and at the behest of the party.

Husain accepted the demand of the party to surrender the senate ticket as a mark of honour for the deceased Senator and respect for the decision of the party.

Enter the SDP
Meanwhile, a former member of the House of Representatives, Hon. Bade Falade, has also won the SDP ticket. He emerged winner at a primary conducted in Iwo, last week.

He polled 15 votes to beat his closest challenger, Hon. Rasheed Adeyemo, who polled 12 votes. Chairman of the election team, Chief Dada, who announced the results said 28 delegates participated in the exercise.

But with the emergence of Falade as the standard bearer for SDP, the July 8 bye-election promises to be a three-horse race with the real battle to be slugged between Hussein of the APC and Adeleke of the PDP. And like the Ondo governorship battle, the Osun bye-election has a lot to sell to the governorship election of next year, which in turn is very much connected to the general election of 2019.

With the godfathers and gladiators now situating their interests, it is yet to be seen how the election will pan out. But certainly, it is an election that holds one of the aces to the 2019 direction. 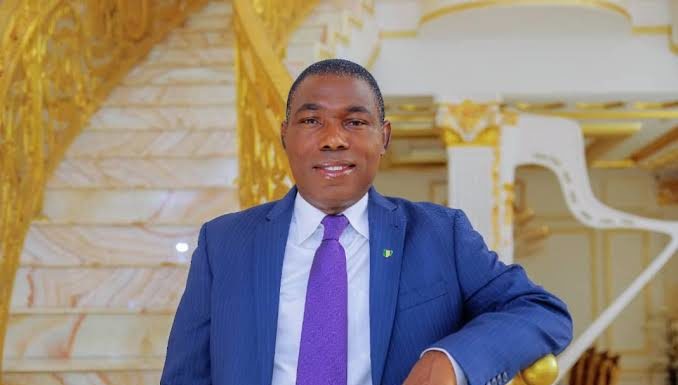