The Civil Society Legislative Advocacy Centre (CISLAC) is stepping up its campaign against tobacco smoking as the prevalence rate of adult Nigerians endangered in the act worries the organisation.

Quoting statistics of the World Health Organisation (WHO) and the Nigeriaâ€™s Global Adults Tobacco Survey (GATS) 2013 at its workshop held recently in Ibadan, CISLAC said about eight million Nigerians are estimated to be at risk of dying from smoking by 2030.

Not only that, the survey report that smoking is currently responsible for over six million deaths worldwide, is again a source of worry to CICSLAC.

The NGO, which noted the high consumption of tobacco in Nigeria at an annual prevalence rate of 4-7 per cent, has therefore warned of the dangers inherent in adults and the under-aged indulging in such acts.
A resource person at the workshop held for Civil Society Organisations in the South-west, Tunde Salman added that the high consumption of tobacco was evidenced by the high mortality and premature death from cancer, diabetes, heart attacks and other non-communicable diseases.

Decrying the low implementation of the existing National Tobacco Control Act (2015) which restricted smoking in public places and prevented people from tobacco smoke resulted in increasing number of direct and secondary smokers, Salman expressed fear at the growing number of young people taking to smoking.

He thereafter called for the promulgation of strong policies that dissuade such youths from starting and encouraging smokers to quit.

“Whether as direct, secondary smoker or as farmers, eight million people are estimated to be at risk of losing their lives due to smoking, especially in Nigeria. Smoking is reason behind increasing cases of cancer, diabetes and other non-communicable diseases. We need strong policies to dissuade youths from starting to smoke while encouraging smokers to quit. Moreover, it may be the major cause of mortality, premature death and disability,” Salman said.

Among other recommendations was a call on government to raise taxes on tobacco companies thereby reducing ability of minors to purchase tobacco and real monitoring of tobacco prevention and usage policies.

Commenting on the issue, Mr. Iskil Yusuf prayed that state governments domesticate and enforce the National Act prohibiting smoking, noting that the cost of rehabilitating tobacco smokers was high.

Also, Austin Erameh of CISLAC noted that non-smokers exposed to second-hand smokers had about 30 per cent higher risk of heart diseases, praying for the implementation of smoking regulation laws to save Nigerians.

Meanwhile, La Mariposa, a boutique for fashion accessories, has opened a business outlet for women inside Jericho Mall, a new commercial centre, which opened for business in the heart of Ibadan, Oyo state capital.
The CEO of La Mariposa, Mrs. Adebola Oyefeso, at the well-attended opening ceremony said the new boutique was conceptualised more than a decade ago.

According to Oyefeso, “La Mariposa meaning â€˜The Butterflyâ€™ is a symbol which reminds us of the style necessary to overcome our fears. The butterfly life-style does not rush the process of patiently nurturing the cocoon but encourages the acceptance of the due processes of nature by faith.”
She disclosed that â€œLa Mariposa will not be limited by a physical space as the e-commerce platform will soon be launched. Our website is now going through the adaptation stage where purchases could be made online and goods delivered expeditiously.
\
â€œLa Mariposa is an extension of an entity named Beagold. Beagold was an evolution of a 3-generation old business based in Nigeria. It started about 60 years from my maternal grandmother, an Itsekiri-Sierra Leonean, who traded in gold, â€˜Georgeâ€™ clothing materials and head-tiesâ€, she added. 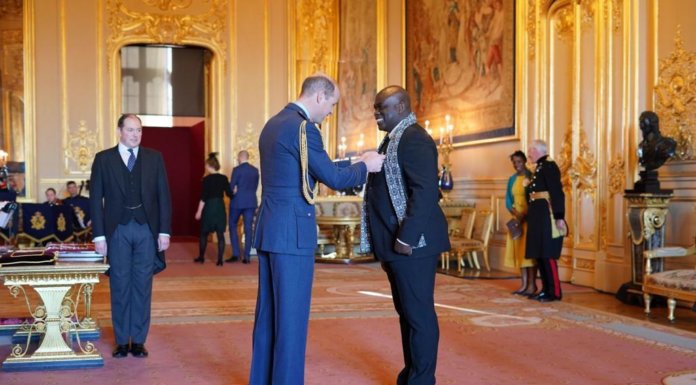