The latest external reserves position showed it fell by $67 million compared with the $30.231 billion it was two weeks ago.
As a result of the central bank’s decision to enhance FX liquidity in the market last month, which led to significant appreciation in the value of the naira, the CBN had adjusted its FX policy.

Among the FX measures announced, as part of efforts to further increase the availability of FX to all end-users, the CBN decided to significantly reduce the tenor of its forward sales from the maximum cycle of 180 days to not more than 60 days from the date of transaction.
With this, some of the FX forwards (30 days) started maturing at the end of March 2017 and their settlement were expected to impact negatively on the reserves.
The CBN has so far pumped about $2.2 billion into the interbank FX market for forward sales (both 30 and 60 days) and retail invisibles in the past six weeks.
The Chief Executive Officer, Financial Derivatives Limited, Mr. Bismarck Rewane, told THISDAY recently: “We must remember that the FX forward contracts started maturing as from the end of March. Forward contracts are post-dated cheques and when they start maturing is when we would start seeing the effects of the intervention on the reserves.”

But the central bank has remained resolute on its objective as indications emerged at the weekend that it would sustain its intervention in the interbank market. This is in addition to the further increase in the sale of dollars to the Bureaux de Change (BDC) operators from $8,000 to $10, 0000 per week.
The naira depreciated to N394 to $1 on the parallel market on Friday.
The acting Director, Corporate Communications of the CBN, Mr. Isaac Okoroafor, said that the CBN was determined to sustain the provision of liquidity in the foreign exchange market in order to enhance accessibility and affordability for genuine end users.
The CBN over the weekend also warned commercial banks and other dealers to desist from sabotaging the efforts aimed at making life easier for foreign exchange end users.
In a related development, the President, Association of Bureau De Change Operators of Nigeria (ABCON), Alhaji Aminu Gwadabe, blamed last week’s depreciation of the naira on the speculators’ onslaught and resistance by some banks.
Gwadabe in a WhatsApp message to THISDAY said at the weekend that the refusal of some banks to sell FX for invisibles was frustrating naira recovery.
He urged the CBN to sponsor a bill at the National Assembly so that the lawmakers would pass a law for naira convertibility in West Africa, as part of the solutions to full recovery of the naira.

Gwadabe argued that the naira was currently a means of exchange in about 15 countries in Africa.
He also urged the federal government to increase security surveillance at the nation’s airports and land borders to checkmate illegal foreign cash evacuation.
According to him, the naira started trading last Monday with a promising outlook for sustained strength against the dollar and other currencies, but it began to fall at the middle of the week.
“The naira ended deeper northward to close at N394 to $1 on Friday, translating to 10 per cent depreciation of what was recorded during the week,’’ Gwadabe said.
The association’s president said that the removal of disparity in applicable exchange rates among the BDCs, Travelex and the banks should have strengthened the nation’s currency.
He added: “The CBN’s knack for last minute solution as recent development has shown, accounted for the misfortune of the naira at the foreign exchange market.’’
Gwadabe said the battle for the soul of the naira would be won if the CBN could boost liquidity to the BDCs for the effective unification of rates.”
According to Gwadabe, “It is evident that the injection of liquidity to the interbank market rather than the BDC sub-sector is not effective and transparent for sustained FOREX rate convergence and unification.

“Statistics from the CBN shows that about 20 banks get $80 million weekly for invisible transaction as against the $20 million weekly for over 3,000 CBN licensed BDCs nationwide.
“The CBN should enhance public awareness to guide end users on FOREX availability and applicable exchange rates.
“The CBN should diversify the buffers from oil proceeds to foreign investors’ inflows and Diaspora remittances.’’ 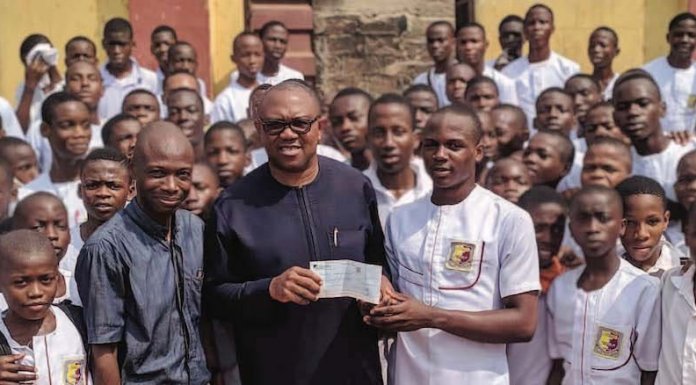 Obi: Fire Incident in School is a National Tragedy, Donates to St. Patrick’s

Tell The Supreme Court That Things Should Always Make Sense.

EAT’N’GO to Expand Operations to 14 Cities Across Nigeria