In the far country where he now resides, in company with his Creator and ancestors, Rasheed Gbadamosi will be a happy soul.

Since his departure into ancestry last November, Lagos State government has been kind to the name and legacy of this illustrious Lagosian who served Nigeria and his state of origin, thanks to the large heart and understanding of Governor Akinwunmi Ambode, who shares a similar passion with the late Gbadamosi in the areas of business and economy as well as in appreciation for the arts.

A telling testimony of how Gbadamosi’s name has been immortalised is the recent talk-of-the-town Eko Art Expo, which held at the main expo hall of Eko Hotel between January 27 and 29. Governor Ambode, who is fast assuming the title of the “Arty Governor” in the Class of 2015 – 2019, did not mince words in giving the main reason for the expo.

“This exposition shall immortalise the name of Chief Rasheed Gbadamosi, an illustrious Lagos man, who served the state till the very end with his talent and passion for the arts and with his time and resources. There can be no better way to honour such a rare breed than to institute an annual arts fiesta in his memory.”

In discussing Chief Gbadamosi, I must confess a bias.

I shared a close relationship with him beyond an abiding love for and devotion to things of the arts. It was a close relationship that has left me stunned since his demise, wondering how he could have succumbed to the pangs of death right in the middle of an assignment that he cherished with his entire being.

As the co-Chairman of the Lagos @ 50 Planning Committee, Chief Gbadamosi was undeterred by his failing health. He was not going to succumb easily to the stroke that had already struck his left limbs. The golden jubilee of his state was an important assignment that needed his cerebral attention much more than his physical contribution and he was not going to relent in making the year-long celebration a success.

I had met him in the early 1990s as a reporter covering the arts, particularly classical music, for The Guardian. He was at that time the Secretary of the influential Board of the Musical Society of Nigeria, and later Chairman. We forged a deep father-and-son relationship immediately.

He would later serve as the Chairman at my wedding ceremony and had never missed any of my book presentations, particularly the last one in June 2016 even when his health had become a thing of concern. He ignored my plea that he should not bother to come to the Nigerian Institute of International Affairs, the venue of the presentation where Cascade of Change: A Decade of Liberal Thoughts provided an intellectual platform to appraise Governor Ambode’s sterling first year performance.

In one of such tete-a-tete with him in late 2015, he had a piece of advice for me, and I believe for every young and vibrant professional who is privileged to be invited to serve in the public sector. Be guided by the theory of ‘Four by Four’ he said. From experience, he did explain, political appointments would rarely allow one to go on long vacations, and official trips abroad are hardly the same thing as ideal holidays where body and soul can be regurgitated.

Four days in every quarter, therefore, was his recommendation to every senior public servant or top corporate players who often get consumed by the demands of their assignments and tend to forget short get-aways or a shut-down for a few days to recalibrate for the good of self.

“I gave all my energy to serving my fatherland and others through my businesses…” he once recollected. “We must never be too busy for our health, friends and family,” he added.

For a man who started early in the public sector as a Commissioner in his mid twenties in Lagos State and would later serve as the Minister for Economic Planning under Chief Olusegun Obasanjo and later as Chairman of the Petroleum Products Pricing Regulatory Agency, Chief Gbadamosi had more than a fair idea of what serving in government meant.

Yet, he was successful in his myriad of businesses as an entrepreneur and industrialist; as a playwright and a notable art collector.

But like the late sage, Chief Obafemi Awolowo, once admonished about dividing every day into three equal eight hours – one for work, the other for leisure and the last for sleep, how many professionals or senior public servants have been guided by that recommendation that seeks to balance work load with family life? How many will be guided still by Chief Gbadamosi’s Four by Four formula?

His transition may be debilitating, but the kind words of Prof. Wole Soyinka, the Chairman of Lagos@50 Planning Committee, in the catalogue for the Eko Art Expo should suffice in putting the exemplary dedication of Chief Gbadamosi in proper perspective while also advocating for its emulation.

“The pioneer collectors (of art works), prominent among them Rasheed Gbadamosi, are responsible for (this) increasing dedication to aesthetic accumulation, rather than wealth accumulation,” Soyinka said, adding that “Gbadamosi also did more than collect; he opened his home to the producers of the artistic commodity.”

To the viewers who thronged the expo in their hundreds, the Nobel Laureate was succinct in his advice: “as you walk among these products of observation, imagination and execution, do remember our departed colleague who straddled the business and artistic worlds with ease, and say a silent prayer that his affluent colleagues be inspired by his example”.

Yet, to the creative ones, Soyinka said, “Our vibrant, young generation of artists can always do with even a mere token of his (Gbadamosi) altruistic commitment, and his generous spirit.”

With the success of the Eko Art Expo, which was thoughtfully named after Gbadamosi, the visual arts community has a reason to be joyful. One, the exhibition will be an annual fair of the arts. Secondly, it answers all enquiries about the place of visual arts in Governor Ambode’s vaunted commitment to matters of culture.

In the Governor’s own words: “Many people have acknowledged and celebrated our modest support to the musical art as well as the motion picture industry, particularly through our yearly One Lagos Fiesta. But others have wondered if our intervention in the creative sector excludes the visual arts.

This exhibition is our response to such well-meaning enquiries. Our administration will leave no artist or any art genre behind in our quest to make Lagos work for all.”

So impressed was the governor that he spent five good hours at the exhibition and was moved to announce that the first Rasheed Gbadamosi Eko Art Expo has now formally marked the beginning of an enduring relationship between his government and the creative sector, including the arts intelligentsia that makes this sector “such an important partner in the development of our state as Africa’s largest, busiest and perhaps most lucrative creative hub.”

In due course, the Governor reminded the large gathering that witnessed the opening ceremony of the expo, “You will begin to see that our interest as well as our engagement with the art community started a while ago and is just about to bear good fruits.

We have commissioned several artists to decorate various parts of our state with landmark installations, which are in addition to the six art theatres we shall build across the five divisions of our state before the end of this year.”

In a matter of months when this will become evident, and with opportunities such as today’s event becoming an annual creative festivity, the governor was apt in saying it would neither be long nor difficult “to agree with us in pronouncing loudly that Lagos is indeed a megacity with a vibrant artistic soul.”

As the undeniable commercial and entertainment capital of Nigeria and West-Africa as well as being the hub of creative expressions in Africa, the aim of Lagos State government is to open up the state for the visual and performing arts to continue to thrive.

To Governor Ambode, no nation or state can achieve its full potential without adequate attention to matters of heritage and culture or without due encouragement for the teeming youthful population that sees and seeks opportunities in the creative industries.

They are the ones, all local artists, commissioned for the art installation and under-bridge regeneration projects going on simultaneously. They will be the prime beneficiaries of the six new theaters that will spring up in all the five divisions of the state later this year, thanks to a state that values socio-economic capital of a vibrant arts sector.

Under Ambode, the clear picture that is gradually emerging is an annual calendar of ‘artyvities’ that starts the year with Eko Arts Expo, spicing different months with activities like the Jazz Appreciation Month /International Jazz Day in April; a dose of comedy in the first Sunday in May to coincide with the World Laughter Day; find a space for boat regatta and culinary art of the state along the way and dedicate a week for theatre and dance before closing the year with The Lagos Street Party and One Lagos Fiesta.  The reason for this is simple, when visitors come, from abroad or other states, they do not just wish to stay in our hotels and watch television. They want great live content too…all year round.

It must be the full appreciation for all that Lagos State is doing with the arts that inspired Prince Yemisi Shyllon, a lawyer reputed to be Africa’s greatest art collector, to enthuse that Governor Ambode has somewhat started a movement that is bound to enliven the culture landscape and then transform Lagos into a profitable hub of arts, entertainment and tourism in Africa.

Without a doubt, this is the picture of Lagos that Chief Gbadamosi must have has taken to his Maker, the greatest artist of all. It is indeed a picturesque gleaming viewpoint that confirms that this megacity of 21 million people is a centre of excellence with an artistic soul.

–Ayorinde is the Commissioner for Information and Strategy in Lagos State 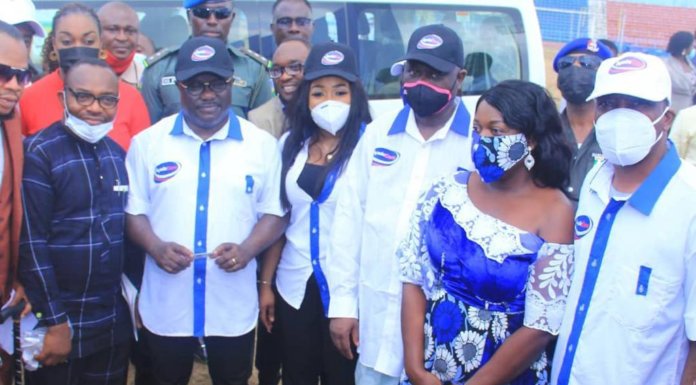 Report of Liquidity Issues in Wema Bank Never from Us, Says PACN