Home Sport First Three Points Excites Remo Stars’ Ugbade
Share
WhatsApp
Facebook
Twitter
Email
Google+
Pinterest
Linkedin
ReddIt
Print
Tumblr
Telegram
StumbleUpon
VK
Digg
LINE
Viber
NPFL…NPFL…NPFL…
By Duro Ikhazuagbe
After recording his first victory in the Nigerian Professional Football League (NPFL) against Abia Warriors yesterday, Technical Adviser of Remo Stars FC, Nduka Ugbade heaved sigh of arrival in the topflight.
Victor Mbaoma’s penalty kick was enough to give Remo Stars it’s much awaited first win of the season against Abia Warriors in the Match-day three clash.
at the Gateway International Stadium in Sagamu,
According to Ugbade, it was a well deserved victory for his team that have no experience in the NPFL and very happy that they have now been able to get their first victory in the league.
“It’s a deserved victory that the guys who have no experience before in the NPFL have now been able to get their first victory in the league.”
“The next thing here is to keep fighting for every match, points and getting wins and draws, this will boost them psychologically to know that there is nothing there.”
“All that is there is experience and it can be acquired over a period of time, though we don’t have too much of time in a league that is more like a marathon.”
The goal came in the 90th minute when Abia Warriors defender handled the ball in the box while trying to stop the Sky Blue Stars from getting a goal.
It was an entertaining 90minutes as both sides thrilled their fans with ball artistry.
The game started on a high as Remo Stars had chances of getting a goal ahead of the visitors in the early minutes of the game.
Fans of Remo Stars were thrown into jubilation mood after Captain of the side, Victor Mbaoma scored from the spot to make it three goals in three games.
The next point of call for the Sky Blue Stars is an away game against Nasarawa United on Wednesday.
In Port Harcourt, Guy Kuemian netted the only goal of an underwhelming NPFL Match-day 3 contest as Rivers United FC defeated Niger Tornadoes 1-0.
The attacker volleyed home a Lukman Mohammed’s cross after the hosts sprang Tornadoes’ offside trap in the 22nd minute.
Victory for the pride of Rivers moves them up to third place on the NPFL standings with seven points while Tornadoes remain bottom of the log with a solitary point from their first three matches.
Sunday’s display by the ‘Pride of Rivers’ was anything but convincing as they had to rely on several heroic stops from goalkeeper, Sunday Rotimi in the second half to hold out for what could turn out to be potentially crucial points in the home strait of the season.
In truth, United made life complicated for themselves by fluffing a plethora of chances when cold-bloodedness and precision by their attackers could have ended the game as a contest long before the midway stage of the second half. .
Unrelenting pressure eventually yielded fruit in the 22nd minute as Kuemian fired home an unstoppable volley with Tornadoes failing horribly in their attempt to play a high line.
Chances were few and far between for the rest of a half that failed to hit the heights as both side struggled for sustained levels of fluency in their passing and movement.
Tornadoes improved dramatically after the break and were extremely unfortunate not to level matters on more than one occasion.
United’s Technical Manager, Stanley Eguma was less than impressed with his side’s display and rued the many missed which could have made the win more emphatic.
“It was a very difficult game for us. We never underrated Tornadoes because it is a game of football.
“We planned to win but unfortunately, we did not have a very good game.
“We won but we were not able to string the passes (together the way we usually do).
“My players were jittery and we lost the midfield battles to our opponents and it made them have the upper hand,” he said at the post match press conference.
Tornadoes coach, Bala Abubakar spoke about a game plan which was carried out to perfection against storied opposition.
“Rivers United is a big team representing Nigeria on the continent.
“Our team is seventy percent new and gradually, we are trying to stabilize the team.
“We came here (to Port Harcourt) with a game plan.
“We knew it would be difficult but we gave a very good account of ourselves,” he said.
Rivers United next travel to Nnewi to play FC Ifeanyiubah while Tornadoes have a home fixture against Wikki Tourists.  Both games will be played on Wednesday.
At the Agege Stadium in Lagos, a fierce display from Mountain of Fire and Miracles Ministries Football Club saw coach Fidelis Ilechukwu and his wards dispatch visiting Lobi Stars 4-0.
A hat-trick from Stephen Odey and a thunderous shot from Tchato Giscard capped an interesting Match-day 3 for the Lagos-based outfit.
Ilechukwu made five changes to the side that suffered 4-0 defeat on Match-day 2 at FC Ifeanyiubah with Agbane Candy dropped to the bench.
Lobi Stars gaffer Godwin Uwua fielded his trusted players to give his side a chance of at least getting their first away points of the season but they bowed to the superior attacking play of MFM FC as they suffered yet another away defeat.
Teenage striker, Stephen Odey opened the scoring for MFM FC after 27 minutes of exchange with a brilliant lob over Lobi Stars goalkeeper, John Lawrence off an assist from Sikiru Olatunbosun.
The Olukoya Boys travel to Ibadan for a date with Shooting Stars on Wednesday in an encounter tagged the ‘Southwest Derby.’ 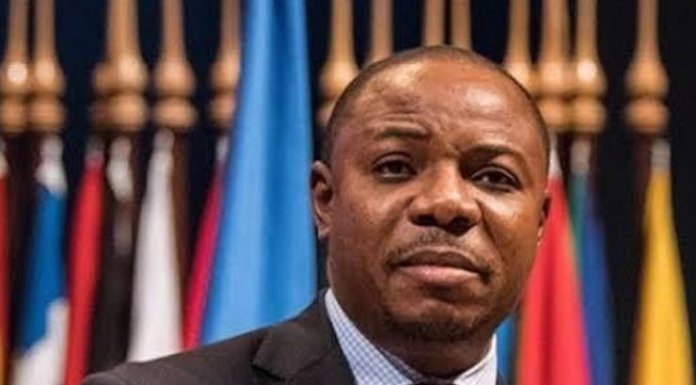