Super Eagles Technical Adviser, Gernot Rohr, has said that the “very good spirit” of the Nigeria national team was vital in Sunday’s 2-1 2018 World Cup qualifying win over Zambia in Ndola.

Rohr, who praised the battling qualities displayed by his side on Sunday, admitted that the Chipolopolo were the better side in the second half.

“In the second half Zambia was the better team. They pushed and pushed and they almost made it 2-2, but the spirit of our team was very good, so we managed to defend until the end,” Rohr said at the joint post-match conference, which was also attended by Zambia coach Wedson Nyindera.
Nyindera praised the fans for their support while also stressing that he is still trying to build a team.

“We are rebuilding the team and at the same time expecting to qualify for the FIFA World Cup.
“We have brought new players to the team and I think they blended well with the old players.
“But most of all I am happy with the response we got from our fans.

“After conceding those two goals they continued to support us.

“That means that we have real Chipolopolo supporters. They went on until the last minute.
“Even when we missed those chances they kept on chanting for us.

“But football being what it is, the result today went the other way.
“I would like to assure our fans that we will compensate this loss in upcoming matches and give them what they deserve,” he said.

Zambia skipper Rainford Kalaba has also admitted some of the players were intimidated by the several Nigeria stars who play in the Premier League in England and this caused their loss Sunday.

The other Premier League stars on the squad were Chelsea midfielder John Mikel Obi, Ahmed Musa from Leicester City and Brown Ideye, who has previously featured for West Bromwich Albion.
Kalaba revealed these stars scared some of his colleagues.

“Playing against experienced players based in Europe, some of the guys were scared of playing against them because they always watch them every weekend in the Premier league and when they see them live, it is often difficult for them to concentrate on the game,” reasoned the TP Mazembe star who posted a short-lived stint in Portugal many years ago.

“In the first half some of the guys were a bit scared, but in the second half we all saw how things went and we controlled the game.

“There are even more stars in Algeria and Cameroun, so this must be big lesson for us.”
Kalaba further said of his impression of Nigeria,” We respect Nigeria because they have some good players.

“They have some experienced players in the midfield and they were well organised.”
The exciting forward said the pressure will now be on the Chipolopolo to get their qualifying campaign back on track.

“Losing our first game has brought more pressure on us, but we hope to improve,” he admitted.
“We are all very disappointed we lost at home because it was important to start (this competition) well.

“We still have time to work together with the coach so that we that we could rectify the mistake we have made.” 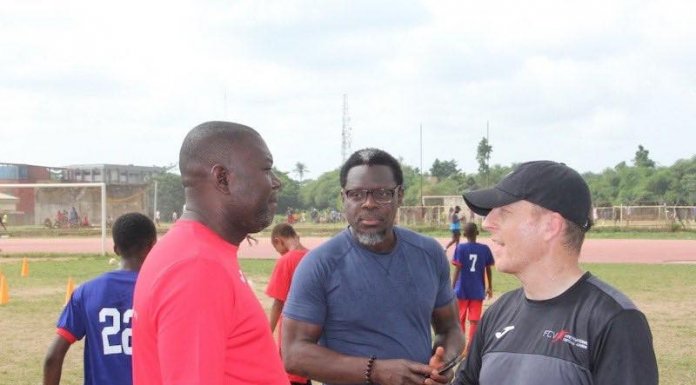 Akinwuntan: Ecobank is the Go to Bank for Regional Trade in Africa