Promoters of estates in the country often talk about delivering decent and affordable housing but hardly walk the talk. Regardless, one project that promises to give value for money is the ultra-modern housing estate being developed by the Nigeria Association of Women Journalists (NAWOJ) and the Nigerian Union of Journalists (NUJ), Lagos State Council.

An impressive groundbreaking ceremony of the exquisite estate took place at project site located at Abaren Community, a low-density suburb in Mowe, off the Lagos-Ibadan Expressway.

A total of 800 homes will be built in the estate, complete with modern facilities including renewable energy for lighting and heating.

This technology would not come cheap, but it is achievable, said Prince AdetunjiOgunwusi, the Chairman of Primewaterview Holdings, the development company entrusted with the job.
Ogunwusi said the plan was to provide the estate with 24 hours uninterrupted power supply which residents of the community would also benefit from but at a premium price that would not disturb their livelihood.

He said the greatest beneficiaries of the project would be the people of Abaren. Electricity will be brought into this community by the special grace of God and the kind of electricity will be renewable energy. Of course, it comes a little bit expensive but at the end of the day we will amortise it. It is not going to come cheap and it is not going to be expensive either. Each home will have its meter and it will be on pay-as-you go basis. We will get all the necessary approval to do this.”

Babalola, who distributed educational materials to school children in the community on behalf of her organisation, said the gesture was to show real love to the community for accepting the project.

A visibly elated President of NAWOJ, Mrs. IfeyinwaOmowole said the project would not have seen the light of day but for the role played by the Lagos State Council of the Nigerian Union of Journalists, led by Mr. DejiElumoye.

“I had a dream but we didn’t have money. I kept looking for who will give us land for free; federal and state governments but nobody listened then I went to Mr. DejiElumoye,” she said.
As part of their contribution to the development of the host community, she said some renovation work would be done in the community school, adding, “We are going to use this opportunity to teach Nigerians, Corporate organisations, the political class and the world how to do CSR that benefits host communities directly.”

She explained that in the course of the project, the community primary school would be roofed and electricity and road networks would be extended to the Abaren community.
Omowole said the estate in Abaren was a pilot scheme and that land has been acquired in Taraba and Abuja for journalists housing.

According to the Chairman of the Lagos Council of NUJ, Mr. DejiElumoye, the NAWOJ/NUJ Pen Jewel Estate is designed to have 800 housing units and that 200 units would be built in the first phase. All are 3 bedroom ensuite with car park that can conveniently take four cars, space for garden and for BQ.

The estate, he said would have connecting streets that would be named after journalists, particularly senior ones, including those actively involved in the activities of the NUJ.
There will be standard school, hospital, police post, shopping mall, recreational area, motorized water system and every facility that should be in a modern estate, Elumoye said. “It is a town within a town and by the time we finish the first 200 units, all access roads would have been completed. You will not recognize the place in December.” That is when the development company promised to deliver the first phase, comprising 200 homes.

Elumoye said the 200 houses would be delivered to beneficiaries on or before December and that the remaining 600 would be completed within 36 months.

The Traditional ruler of Abaren Kingdom, Chief Solomon Akinyemi, commended the initiative and thanked the unions for bringing development to the area.

“We built the schools here through community efforts and we started bring electricity poles but we are amazed at the offer to use modern roofing sheets for our schools and give us uninterrupted power supply.

“We thank the journalists and developer and pray that they keep their promises,” he said. 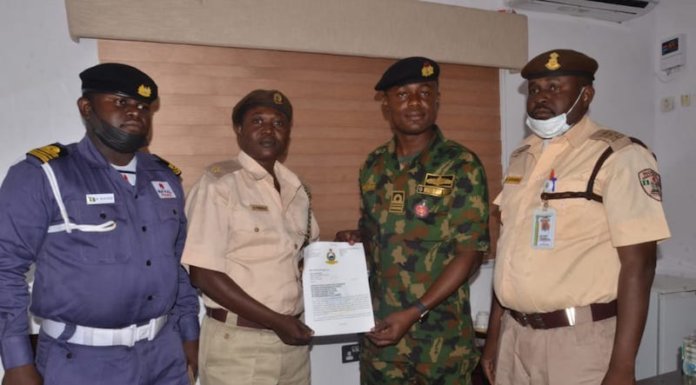