Concept Nova, an information technology service and software development company, has advised the federal government to mandate all car users to fix tracking devices in their cars to prevent car snatching as part of efforts to rid the country of crime and criminal activities..

Head of Independent Sales, Concept Nova, Mr. Collins Njoku made the call in Lagos during the company’s brokers forum organised to sensitise the youths on how to solve some basic information technology problems in Nigeria.
He emphasised the need for the adoption of tracking solutions device, which he said, would make it easier to recover stolen or snatched cars, adding that if government makes it mandatory, the company would give platform access to the police so as to fast track the recovery of the stolen vehicles.

“I want to urge the federal government to mandate all car users in the country to have telematic device in their cars. This will make it easier for the tracking solution provider to recover cars/vehicles whenever snatched or stolen. And if this is made mandatory, we can even give platform access to police jurisdiction so that if there is any report of car snatch and it is reported by the owner, the police can go to the platform and it will help them monitor the car themselves even without calling the tracking company,” he said.

According to him, if the track monitor is made mandatory, it will go a long way in helping the business and recovery of stolen vehicles and car snatching will be drastically reduced because everybody will be aware.

He explained that despite Nigerians’ low exposure to technology, there was still room for awareness among people, stressing that many people are perplexed about the information they get during the presentation on the tracking solutions by Concept Nova.

“The challenge is that the Nigerian’s exposure to technology is not so wide and that is the essence of this forum. A lot of people were perplexed about the information we gave about the tracking device despite the fact that the device has been on for more than 10 years. The information is not widely circulated and that is why we are making so much efforts to get people aware,” he added.

According to him, “We have talked about track monitor, fuel monitor solution, C-cargo, a truck monitoring solution which enables truck owners to monitor the load their truck is carrying. The tracker tells you where your vehicle is, it cannot tell you which load your vehicle is carrying. C-protect is another product that protects the screens of vehicles. If the burglars hit your vehicle screen with hammer or hard object repeatedly but it will not shatter.”

“C-protect also protect against domestic accident in the homes. It can be fixed in your window glasses, centre table glass so that they cannot be easily broken by your children or injure them. The good thing about the C-protect is that it is transparent and nobody knows it is there,” he said.
He added that the participants were selected for the programme after meeting the stipulated conditions. “We need people who will be able to relate with the products we are selling, people that have basic level of education so that when we relate with them they would understand what we are saying.”

One of the speakers at the forum, who focused on the track solutions, Mr. Anthony Orji, said over 500 vehicles could be monitored simultaneously through one platform, adding that it will be easier to detect if the car/vehicle that is supposed to operate in Lagos has been taken to Port Harcourt.

“The app is specially designed for the purpose of monitoring and tracking. If the driver exceeds the specified speed limit, you will get the report on your mobile app immediately. The tracker is always hidden in the car that is why we don’t allow anybody including the owner of the car to know whenever we want to fix it,” Orji said.

AREWA24, the 24/7 all-Hausa language entertainment and lifestyle satellite TVchannel, production studio and media company, has celebrated its two-year anniversary. The entertainment platform, which was launch on the eve of Ramadan, 2014, has established itself as the homegrown voice of Northern Nigeria. It produces and broadcasts entertaining and locally relevant Hausa language programming across a variety of popular genres to Hausa speakers across Northern Nigeria and the surrounding countries.
President of the company, Jacob Arback, said: “On this notable occasion, all of us at AREWA24 want to first extend our most sincere thanks and gratitude to our viewers, whose trust and valuable feedback has helped us shape and build AREWA24 in the right way. We extend thanks to our loyal advertisers and their agencies and to our strategic partners such as the Nigerian Television Authority (NTA), Eutelsat and Jordan Media City. The AREWA24 production and commercial staff, Arback continues, has grown by leagues from the channel’s early days to today where the AREWA24 studio is producing programming on a quality par with that of top Nigerian and international channels,”

Also speaking, the Head of Studio, Mukhtar Musa Bako, said the inauguration of the channel was a relief to northern audience, who had always willing to have a brand of their own in the entertainment industry. “We are happy to witness first-hand the joy and pride in culture that we are able to bring to our viewers. Since its debut, every day has remained memorable across Northern Nigeria. Another inspired development is the quality of our staff, they are not only committed, they are productive,”
According to the management, the channel was launched in 2014 to fill a glaring void of locally-produced Hausa language entertainment and lifestyle programming that reflects with pride Northern Nigerian life, culture and music. Today, the channel is said to be available to over 80 million Hausa speakers in Nigeria and West Africa through its free-to-air broadcast on Eutelsat satellite.

Olam Sanyo Foods Limited has introduced into the market, Mama Gold Instant Noodles. According to a statement issued by the promoters of the brand, the unveiling, which took place in Lagos, was done by some key distributors of the company with a lot of excitement.

According to the Group Product Manager of the company, Ebere Ejidike; “Mama Gold, as a brand has been there in rice and semolina category. It is loved and trusted by Nigerian consumers for its high quality. It is a brand that is very different and nutritious. Mama Gold noodles is specially formulated after more than 2 years of research by a team of scientists from our sophisticated Research and Development facility, in collaboration with Sanyo Foods, Japan and a flavor house in Austria. After 7 rounds of intensive consumer research we got the perfect chicken flavor which is loved by Nigerians.”

The Group Product Manager further revealed that Mama Gold Instant Noodles is of a superior quality with right blend of seasoning, the tastiest noodles ever with a golden colour and less sticky. It gives a lip smacking taste of goodness. The product was extensively researched amongst consumers (mothers and Kids) across Nigeria through blind product tests by the leading research agency. 73% of mothers & 70% of children preferred Mama Gold noodles over the leading brand.
Mama Gold Noodles was said to be available now only in Lagos, in 3 pack sizes – 70g, 100g & 120g. 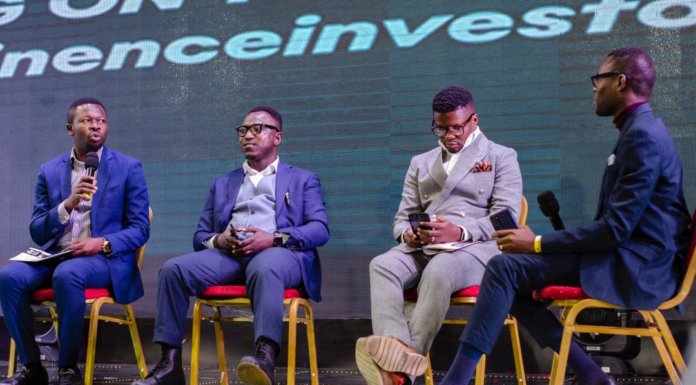