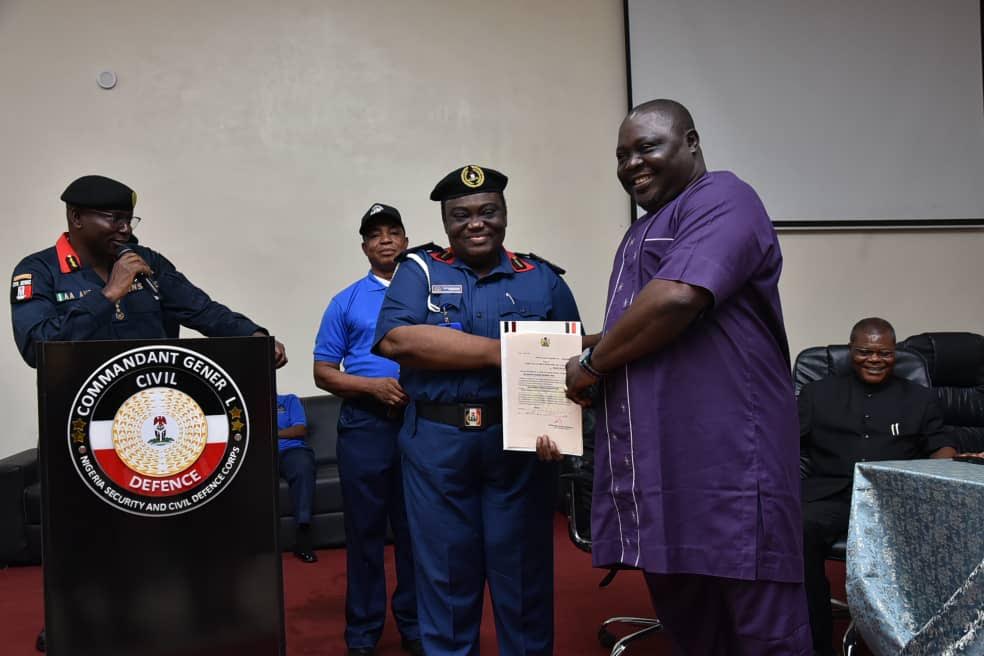 Prince Taokeek Olukoya Abiodun is a man, who through dint of hardwork, has contributed towards the development of Nigerian security and real estate sectors, rendering services to both corporate, public and private organisations, through his firm, The Prince Guards Security Nig Ltd and The Prince Continental Mega Company Ltd. Recently, the CEO shared with Chris Asika how the Nigerian security system can be improved through the use of high-tech surveillance gadgets, among other issues

His passion for security started as a young man though he trained as an automobile engineer at  the Yaba College of Technology (YABATECH).

“I had an edge over my colleagues because my work exposed me to operations, patrol and administrative departments in Pahek Security Ltd. I was at different times the operation manager, patrol manager and administrative manager in the company and the best of most of my experience is what I brought onboard as the CEO of my own security firm, The Prince Guards Ltd. While at the Pahek I took control of all the guards,” he said.

Abiodun said he had six guards when he started his security firm, but today, there are over 100 guards, adding that the company has obtained all required certifications from relevant authorities, which include Port Facing Security Officer (PFSO), Company Facility Security Officer (CFSO) among others.

He stated that the guards have undergone paramilitary training with the Nigerian Security and Civil Defense Corps (NSCDC), and have certification from NSCDC with certification number: NSCDC/PG/022, a license of operation for private security companies in Nigeria under NSCDC Ministry of Interior.

According to him, the firm started in 2006 when he left Pahek, as a real estate and building construction firm. He said The Prince Properties Ltd, a member of the group registered as The Prince Continental Mega Company Ltd, has over the years, managed 60 houses in Satellite Town, Lagos, and has built over 20 houses in Lagos, Anambra and Bayelsa States.

Regretting the increasing rate of insecurity in the country, despite the huge budgetary allocation to security, he called for more efforts by security agencies and government.

“Nigeria is still far from having an organised security apparatus to safeguard lives and properties, we are still far. I was in Dubai for one month for a security conference alongside NSCDC. We were exposed to the United Arab Emirate (UAE) training structures for police and guards. I was impressed with the level of equipment and organised manpower equipped with efficient digital database.

“I never saw any police officer on the road, but yet the system is so safe that they have very low crime rates with high-tech security surveillance gadgets everywhere, monitored with sophisticated mainframe database 24/7. Everybody is being watched on their system and every corner is safe. 24 hours operation/protection is guaranteed, that is what we need in Nigeria.”

He said the main challenge confronting security in the country is lack of fighting equipment because  soldiers are not equipped with sophisticated weapons.

“The terrorists are more equipped because they are sponsored by external forces. Let’s make up our minds that this is war because terrorists are ready to fight and bring down Nigeria. We don’t need dialogue/discussions.”

He noted that the security problem became worse because the country did not fight the war, but earlier relied on dialogue yet in the past huge budgets meant for weapons were embezzled by politicians and heads of security agencies, yet no procurement  for equipment were made to fight back the terrorists.

He also suggested that all channels of passing internal intelligence information to terrorists should be blocked and a formidable team with a special command  working directly with all the neigbourhood villages of the terrorists’ base must have intelligent surveillance working with the team.

“The challenges are so many, there should be incentives put in place so that both public and private institutions can be able to motivate guards who in most cases are paid N20,000. They are the first security of every organisation and should be encouraged with good pay. Government should ensure that all private security companies are registered and detailed for proper monitoring.”

Abiodun also called on the youths to believe in themselves and stop the intake of illicit drugs, which also increases crime rate.

“My fear for the youths of today is the way they have taken solace to the use of illicit drugs due to the economic hardship. We all know that these drugs do not solve problems, at most they make you sleep and when you wake up, you still meet the problems the way you left them. I urge our youths and other Nigerians to believe in themselves. I always tell people; everyone’s destiny is in their hands. Once you believe in yourself and face your challenges and work hard, you will definitely get there someday.”

On his social life, Abiodun is the chairman of Liverpool Estate Residents’ Association Zone 2 Satellite Town, Lagos, where he has been a former secretary and vice-chairman. His leadership has also transformed the estate where he has provided security, water drainage and a bridge project which is ongoing at a nearby Heathrow Estate, because the area is facing the waterfront which has attracted oil tank farms and bonded container terminals.

He was the treasurer and secretary for All Progressive Congress (APC) ward F of Oriade LCDA of Lagos and PTA former chairman of Nigerian Navy Primary School, Navy Town, Ojo Lagos, and also the PTA chairman of Navy Officers Wives Association (NOWA) Secondary School.
His hobbies include football and table tennis. He is married with four children.