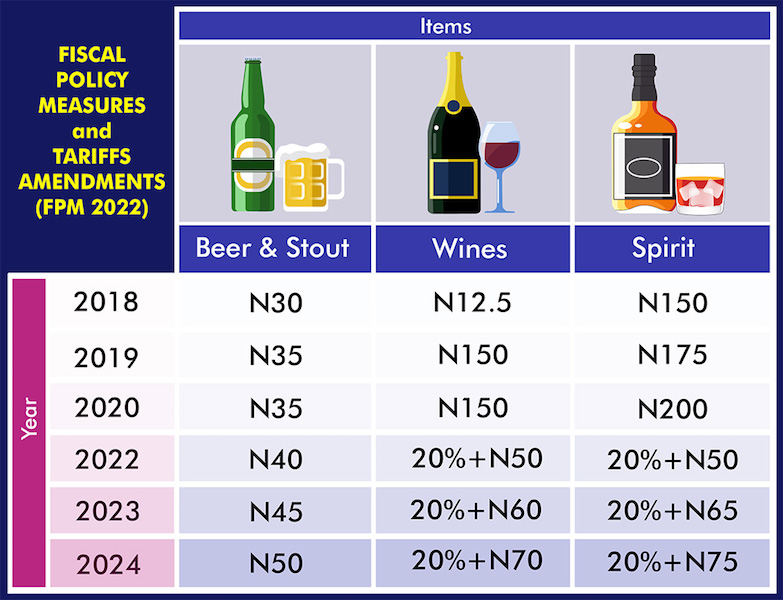 According to reports, the newly introduced Fiscal Policy Measures, which specify a new excise regime for makers of non-alcoholic beverages, alcoholic beverages, cigarettes and tobacco products, are worsening the crisis in the Nigerian manufacturing sector, which is already grappling with the issue of factory closures as well as the relocation of firms to neighbouring countries. To avert further strains on the economy, the time to dialogue with stakeholders is now, writes Festus Akanbi

At the 28th edition of the Nigerian Economic Summit Group (NESG) which was held last week, one issue raised by President Muhammadu Buhari while declaring the summit open was Nigeria’s challenged revenue base which has pushed the nation’s economic managers to opt for borrowing, issuance of new taxes and levies and the adoption of fiscal discipline.

The president also did not miss the opportunity to restate the commitment of his administration to shore up Nigeria’s revenue levels and bequeath to the incoming administration, an economy free from excessive debt entanglements.

There is no doubt that one of the vehicles for revenue enhancement was the newly introduced Fiscal Policy Measures announced on March 1, 2022, by the Minister of Finance, Zainab Usman. This comprises Supplementary Protection Measures for the enforcement of the Economic Community of West Africa States Common External Tariff (ECOWAS CET) 2022-2026, and excise duties on goods such as non-alcoholic beverages, alcoholic beverages, cigarettes and tobacco products, and telecommunication services with effect from April 1, 2022.

Fiscal Policy Measures (FPM) are a set of tools designed by the federal government to foster economic growth by expanding investment in the public and private sectors and diversifying resources from less desirable investments to more desirable ones. The 2022 FPM supersedes the 2021 FPM which had been in force since September 6, 2021.

The FPM 2022 replaces the FPM 2021, and among other changes, introduces Import Adjusted Tax (IAT) on 172 tariff lines, and prohibits certain goods originating from non-ECOWAS member states.

However, like some other players in the economy, the Nigeria-British Chamber of Commerce (NBCC) has expressed concern over plans by the Federal Ministry of Finance, Budget and Financial Planning to effect a hike in the specific excise component of some products, including alcoholic and non-alcoholic beverages and tobacco.

Almost at the same time that President Buhari was lamenting the dire revenue situation in the country last week, the chamber, in a statement by its President, Bisi Adeyemi, said the introduction of a new regime of excise duty is a significant digression from the recently adopted 2022 fiscal policy measures and tariffs amendments (FPM 2022) roadmap, which covers the excise expansion from 2022-2024.

Calling for a thorough review of the policy, the NBCC stated, “While we understand and appreciate the need to improve federal government income, a holistic review of the peculiarities of Nigeria’s current micro and macroeconomic realities, as well as the impact of these on businesses and Nigerians specifically, should be undertaken.”

According to Adeyemi, the call was to “ensure sustainability and minimise the negative impact on the affected sectors, including the value chain, which will be the hardest hit.

“Long and medium-term plans and policies that will allow for the engagement and input of all stakeholders usually yield optimal outcomes.”

Quoting a recent report by the National Bureau of Statistics (NBS), she said that the value of manufactured goods traded for the second quarter of 2022 fell by 36% compared to the same period in 2021.

“Even as manufacturers adjust to the approved excise increase in the FPM 2022, the aforementioned conditions are being exacerbated by the fragile state of the country’s economy,” she added.

Adeyemi implored the federal government to retain the approved excise regime, as contained in the approved FPM 2022, covering the period from 2022 to 2024, and to urgently engage with the affected sectors, chambers of commerce, the organised private sector and other stakeholders.

She believed retention of the existing rate will, among others, increase tax contribution from the affected sectors which will be delivered by 2022 FPM; explaining that these sectors can support the government’s objective of reducing the high rate of unemployment reported to be at about 33.3%, and improve the inflow of foreign direct investment as investors confidence is strengthened by government’s continuous demonstration of its willingness to create an enabling environment through stable and consistent policies.

She called for negotiation with the affected sectors, chambers of commerce, the organised private sector and other stakeholders before the policy takes off.

The alarm raised by the chamber came at almost the same time as that of the National Union of Food, Beverages and Tobacco Employees (NUFBTE) calling on the National Assembly to intervene on its behalf to avert the further increase of excise duties on carbonated drinks.

The letter titled: ‘’Re: Excise Duties on Carbonated Drinks (The Unbearable Impact on Food, Beverages and Tobacco Industries: An Appeal for Immediate Abrogation Thereof)”, and signed by Mr. Lateef Oyelekan and Mr. Mike Olanrewaju, its National President and General Secretary respectively, beckoned on members of the House of Representatives to join efforts to save the food, beverage and tobacco industry, and ultimately, the Nigerian economy.

Like the chamber, the labour union advised the regulators to invite their members to discuss the viability or otherwise of the first phase already introduced.

“While we hope that this appeal will be found worthy of your kind consideration, we continue to assure you the deepest of our regards and unwavering solidarity,” the duo said.

They noted that no fewer than 5,000 Nigerian workers had been rendered redundant between January and September 2022 when the first phase of the excise duties was introduced till date.

They revealed that some companies were still contemplating redundancy exercises owing to the drastic reduction of their production capacity, while most companies were seriously considering the possibility of relocating to countries where the cost of production was bearably low.

“Manufacturers, for the fear of paying excise duties on products, which the market is no longer sustainable have drastically reduced their productions.

“Therefore, it is foisting possible reduction on their shareholders’ dividends and also impacting negatively on the Nigerian economy,” the leaders said.

According to them, the price tag on both products is relatively the same and/or in most cases foreign products are readily available at cheaper prices.

“Survey in the last months has placed the demand for foreign imported carbonated drinks over the locally-produced.

“This is largely on the ground of affordability in the foreign and/or imported carbonated drinks which is now ostensibly affordable and price friendly rather than the locally-produced ones.

“They enjoy greater patronage in detriment to our locally made products and this is attributed to the increment of price introduced by the manufacturers on their products.

“Also, the cause of these price increases is born out of the introduction of the first phase of the exercise duty, for which the consequence inevitably lies with their respective customers and consumers to bear,” both leaders said.

Ironically, the performance of quoted firms under the consumer goods sector of the Exchange has been on the rise, data compiled by Nairametrics has shown.

It parsed through data from 10 of the largest consumer goods companies on the Nigerian Exchange cutting across the brewery, food processing, and flour mills. They include Nestle, Cadbury, Unilever, and Dangote Sugar. Others include Nigeria Breweries, Guinness, International Breweries, Flour Mills, BUA Foods, and NASCON.

Results from their cash flow statements in the first nine months of this year compared to December 2021, show companies relied on a combination of debt, sales, and vendor management to shore up cash balances.

Calling for a dialogue with affected companies will provide the opportunity to give the policy the human face it needs to win the support of the various stakeholders in the Nigerian manufacturing sector.