In a Move That May Prevent Vote Buying, CBN Sets New Withdrawal Limits 4 hours ago

Tinubu: How I Made My Money, I’m Not Denying My Wealth 4 hours ago 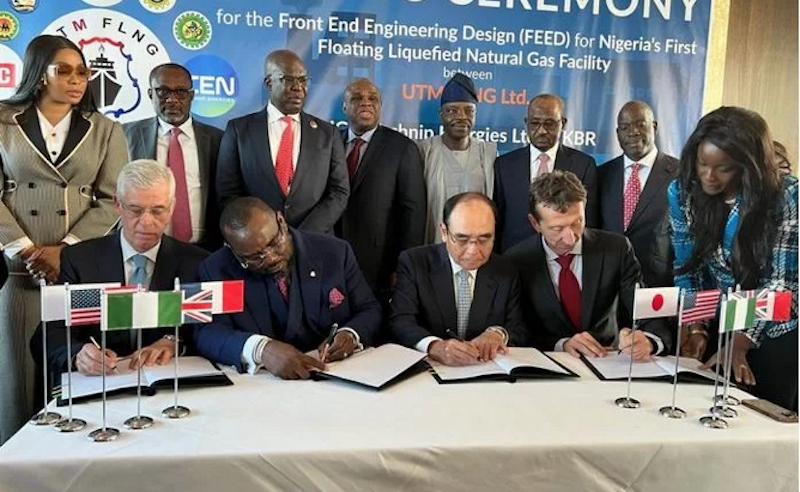 The agreements were signed at a brief event at the Hilton Park Lane, London, UK.
The FEED contract with the three firms essentially entails conducting for UTM Offshore Limited, various studies to figure out technical issues and estimate rough investment costs for the FLNG facility prior to the Engineering, Procurement, and Construction (EPC) phase of the project. The timeline for this phase of the FLNG project is 10 months.

The FEED contract signing was a follow-up to the successful execution of the pre-FEED agreement between UTM Offshore Limited with JGC, a leading international engineering design, procurement and construction firm, a statement explained.

It revealed that the Pre-FEED scope was completed within four months from the commencement date.
KBR provided due diligence on the JGC scope by conducting a third-party review of all deliverables from JGC during the Pre-FEED phase.
UTM Offshore Limited entered into the pre-FEED agreement with JGC and KBR in May 2021.

At the signing ceremony, the Managing Director and Chief Executive Officer of UTM Offshore Limited, Mr. Julius Rone, underscored the fact that like most other nations of the world, Nigeria was keen on and working assiduously towards achieving energy transition.

He said Nigeria’s energy transition necessarily should start with moving from huge dependence on crude oil to gas.
“Like I have said in several fora, for us in Africa, especially Nigeria, energy transition is steeped in harnessing our abundant gas resources,” he said, adding, “At UTM Offshore, we completely agree with President Muhammadu Buhari that given Nigeria’s potential of about 600 trillion cubic feet of gas, the commodity has the enormous potential to diversify our country’s economy.”

He explained that the rising global demand for cleaner energy sources had offered Nigeria an opportunity to exploit gas resources for the good of the country.
“We thank the president for making gas development and utilisation a national priority to stimulate economic growth, further improve Nigeria’s energy mix, drive investments, and provide the much-needed jobs for our citizens in the country,” he added.

Rone disclosed that UTM Offshore was impressed with JGC’s and KBR’s handling of the pre-FEED component of the FLNG project hence the resolve to reengage the firms for the main FEED Phase.

“JGC Corporation came highly recommended, given the several similar projects the firm had undertaken across the world. Indeed, of the total number of five FLNGs in the world today, JGC Corporation was involved in the design, construction, and commissioning of three,” Rone said.

He stated that UTM did not take for granted the fact that what it was doing was largely novel, pointing out that it was the first of its kind in Nigeria.
“Today, we are here to consummate the very fantastic working relationship between UTM FLNG, KBR, JGC, Technip Energies Ltd, and Cryogas Equipment Private Limited as we sign the main Front End Engineering Design (FEED) for Nigeria’s first Floating Liquefied Natural Gas Facility,” he said.

Speaking at the FEED contract signing event, the Minister of State for Petroleum Resources, Chief Timipre Sylva applauded the pioneering efforts of Rone and UTM Offshore, adding that the federal government would continue to support and create the enabling environment for business investments in the country, especially in the area of gas development.

“The PIA is already improving the petroleum industry’s reputation, paving the way for new investments, creating jobs, supporting the economic diversification agenda, and strengthening Nigeria’s ability to fulfill the world’s expanding energy demand,” he said.
The minister reiterated the federal government’s determination to leverage on natural gas as the nation’s transition fuel, with UTM’s Floating LNG Technology as the game changer.

While stressing the significance of innovation, technology, and policy as key drivers of change in the energy sector, Sylva maintained that gas remained the solution to ensuring Nigeria’s energy security, economic competitiveness, and reduction of greenhouse gas emissions.

The minister noted that the UTM FLNG would target the processing of associated gas currently flared in order to cut carbon emissions and monetise additional reserves for the domestic and global markets, which aligns with the federal government’s gas flare commercialisation programme, and the decade of gas agenda.
President of African Export-Import Bank (Afreximbank), Prof. Benedict Oramah, lauded the tenacious and transparent pursuit of the FLNG project by Rone and his UTM team, pledging the full backing of the bank for the project.

He said: “Nigeria is a gas zone; the country holds the highest reserve of gas in Africa, but for years, we were burning our wealth through gas flaring.
“It is a good thing that President Buhari decided to press the pause button so that Nigeria can optimise the utilisation of the country’s gas resources to enhance the lot of the nation, and create wealth for the people from what is abundant in the country.”

The UTM and Afreximbank had signed a $5 billion MoU for the financing of the FLNG in December 2021 with Oramah saying, “The UTM FLNG is one of the projects Afreximbank is very proud of; just like the Dangote refinery. We are proud to be associated with these two projects in Nigeria.”
Also, at the contract signing event in London, Nigeria’s High Commissioner to the United Kingdom, Ambassador Sarafa Ishola underscored the full backing of the federal government for the project.

“This is one of the occasions that makes us very proud as representatives of Nigeria in other countries,” he said, adding, “Nigeria is committed to climate change and COP 23 and what UTM, conceiving and actualising Nigeria’s first Floating LNG conforms with energy transition strategy of the Government of Nigeria.”
At the event were the heads of the regulatory authorities in Nigeria’s oil and gas sector, the Executive Secretary of Nigeria Content Development and Monitoring Board (NCDMB), Mr. Simbi Wabote; the Chief Executive Officer, of Nigerian Upstream Petroleum Regulatory Commission, Mr. Gbenga Komolafe; and Chief Executive Officer, Nigeria Midstream and Downstream Petroleum Regulatory Commission, Mr. Farouk Ahmed.

All the regulatory chiefs commended the tenacity of Rone and his team and pledged their continuing support for the project. Top officials of the UTM FLNG’s technical partners, including the President of JGC Holdings, Mr. Tadashi Ishizuka; Chief Operating Officer of Technip Energies Limited, Mr. Marco Villa; the Vice President of KBR, Mr. Paul Baillie; and Head of LNG Operations at Vitol, Mr. Steve Brann, committed to concluding the project in a record time.

The facility, a newly built vessel, would receive gas feedstock from an existing offshore facility, treat it to the required LNG standard, liquefy the gas, store the LNG and offload to LNG carriers.
When completed, the floating LNG shall have an LNG production capacity of 1.2 mmtpa, Turret and Mooring System, Gas pre-treatment modules, LNG production modules, living quarters, self-contained power generation and utilities as well as capacities for LNG storage and offloading.