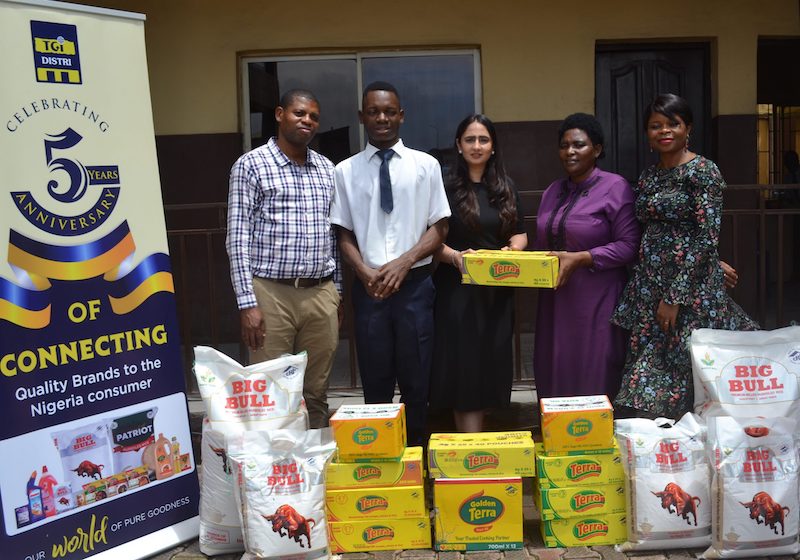 As part of activities to mark its 5th year anniversary, leading food brand distributor, TGI Distri Limited recently paid visits to SOS Children’s Village and Bethesda Home for the Blind in Lagos. The business also visited The Green Pasture Children’s Home Kano to felicitate and spend time with the special people in these homes.

During the visit, the business donated its quality products to the homes as part of its corporate social responsibility. This is aimed at supporting the growth & development of the special people in these homes by providing nourishment for their wellbeing. Items donated include cartons of Golden Terra Soya Oil, Big Bull Rice and Terra Seasoning Cubes.

Arriving at the SOS Children’s Village Isolo, the team from TGI Distri Limited was welcomed by Justinah Ochejeni, Account Officer, Interim Store Coordinator of the orphanage. The team commended the administrators of the Orphanage for the remarkable work being done to restore hope and positively impact on the lives of children resident there.

Same gesture was extended to Bethesda Home for the Blind Mushin, where the team from TGI Distri were treated to a heart-warming musical performance. During interaction with the students, the team learnt of the aspirations of some of students and encouraged them to go after their dreams against all odds. With smiles on their faces, they thanked TGI Distri Limited for spending time with them and making their day much brighter.

Chioma Ohakwe, the administrator of the Bethesda Home for the Blind expressed delight with the visit by the team from TGI Distri and commended the management of the company for the initiative.

“I am very happy, and you can see the smiles on the faces of these students. It doesn’t happen to us everyday and anytime we see people donate to our organization, we are grateful, ”she said.

Also, at the Green Pasture Home, Kano the children were delighted to welcome the team and receive their share of love from the TGI Distri family. The administrator of the home thanked the team for their support towards the wellbeing of the children.

Leading the team, TGI Distri’s Strategy and Business Development Manager, Tanvi Savara stated that the company is committed to engendering a better life for consumers across its markets by impacting the lives of members of the communities in which it operates.

“As we mark this significant milestone, we share the spotlight with people, communities, and organizations such as the SOS Children’s Village and Bethesda Home for the Blind. By making these donations to bring relief to the occupants of these homes, TGI Distri Limited demonstrates the value it places on the wellbeing of its host communities.” she said.