S&P: Near-term Oil Price to Peak at $55/barrel as Consumption Slows in Europe, Others 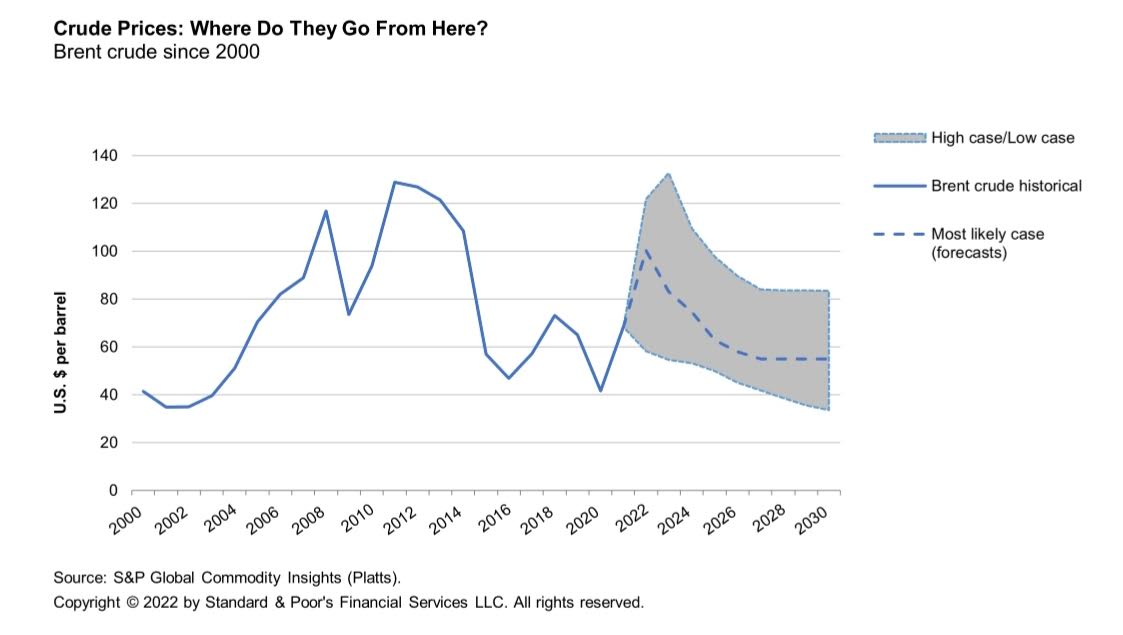 As oil peaks in Europe and other parts of the world, S&P Global Commodity Insights, a market research and intelligence firm, has projected a $55 per barrel price after the current supply tightness being experienced in the sector.

In a new report tagged: “Energy Transition: Developing Markets Are Still Fuelling Demand For Oil,” S&P said however stated that if the Russia and Ukraine war tarries, price could peak at $80.

The global oil market is at the moment going through some supply issues as Nigeria continues to lead the production underperformance by various producing countries.

In August, Nigeria hit a record low oil production of 972,394 barrels per day according to data obtained from the Nigerian Upstream Petroleum Regulatory Commission (NUPRC) yesterday.

The development marked a new nadir in the downward spiral in Nigeria’s capacity to drill enough oil to boost its desperately needed foreign exchange even at a time that the price of the commodity is hovering around $100.

“Looking beyond the current market tightness and the inevitable recalibration period, economic cost fundamentals indicate that the price of oil should settle near $55 per barrel.

“However, should geopolitical tensions and disruptions to oil supplies last, such as the Russia-Ukraine conflict, long-term oil prices could certainly climb to average $80/bbl or more, at least temporarily, ”the report said.

Again, it explained that upward pressure on long-term oil prices could also be influenced by increased climate-related costs for producers, such as voluntary or compliance-related carbon costs, or requirements for higher returns on investments.

“On the other hand, the reduction of oil production costs and further policy efforts to push down oil demand could see oil prices fall to the low $50s or even to $40/bbl (in real terms) under a 2 degree scenario, with only supply at the lowest cost able to compete in a smaller oil market,” S&P added.

On demand, it noted that it is expected global oil demand growth will peak at 112 million barrels per day (mbpd), up from 101 mbpd this year as developing markets keep expanding.

In a scenario where the world is on track toward limiting global warming by 2 degrees, the likelihood of which the firm said it considers low, S&P noted that oil demand will still exceed 87 mbpd by 2040, corresponding to a decrease of 1.5 per cent per year on average.

Should this happen, it projected that it will be partly mitigated by OPEC’s ability to adjust supplies and by the typical annual 4 per cent to 5 per cent natural decline of oil fields.

“It (demand) had already peaked in developed countries in 2019, before the pandemic, but further growth will now be fuelled by developing countries,” S&P stated.

That said, S&P said a host of factors could place the actual peak at any time between 2030 and 2040, since oil demand is projected to stay relatively flat after 2030.

S&P also cast doubts over the possible realisation of a 2 degree global warming reduction as being pushed by some of the developed countries of the world.

Nigeria has set 2060 as its NetZero target, although it remains to be seen how that will be achieved with the country still largely dependent on its oil production for the much-needed foreign exchange supply.

Earlier this month, Vice President Yemi Osinbajo  was in the United States where he proposed a Debt-For-Climate Swap deal to achieve “a just and equitable energy transition” for Africa, saying it would significantly advance the course of global net-zero emissions targets.

Since Nigeria and the whole of Africa emits less than 3 per cent of the global volume, Osinbajo said the debt for climate swap will allow for bilateral or multilateral debts to be  forgiven by creditors in exchange for a commitment by the debtor to use the outstanding debt service payments for national climate action programmes.

“However, even considering this sizable decline, the current oil demand trend is far from consistent with limiting global warming to 2 degrees, let alone to 1.5 degrees or lower in line with the Paris Accord. Global oil demand needs to peak by 2025 for global emissions to be in line with S&P 2 degree trajectory by 2050,” S&P said.

It added that the impact of the energy transition will therefore likely be more gradual when it comes to oil, considering that oil underpins a major part of the global economy.

Moreover, the report noted that there are limited immediate alternatives to oil in some use cases, unlike for coal and gas, which renewables can replace in power generation, for instance.

It observed additional pressure on oil companies from financial markets because of environmental considerations.