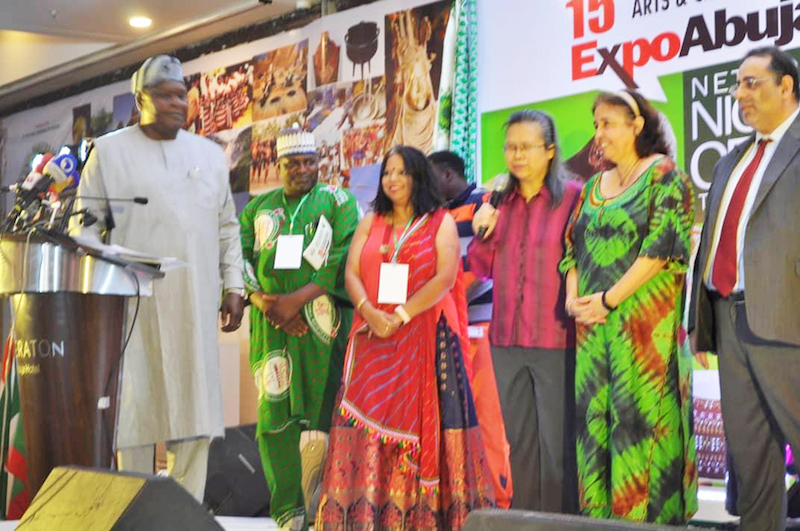 The rich cultures of over 20 countries were showcased at the just concluded 15th International Arts and Crafts expo organised by the National Council for Arts and Culture, writes Charles  Ajunwa

This year’s 15th International Arts and Crafts (INAC) themed ‘Networking Nigerian Crafts to the World’ hosted by the National Council for Arts and Culture (NCAC) lived up to expectations as the over 20 countries that converged in the Federal Capital Territory (FCT), Abuja, showcased their rich and diverse arts, crafts, cuisines, fashion and cultural displays  to the whole world.

The Ladi Kwali Hall, Sheraton Hotels and Towers, Abuja, venue of the cultural expo, attracted thousands of participants from all walks of life – the diplomatic community, young entrepreneurs, culture stakeholders and enthusiasts. Apart from the hall being decorated with mind-blowing pictures of past INAC expos, three giant screens mounted inside and outside the hall captured all the frills and thrills throughout the three-day expo. Although there was top-notch security provided throughout the expo, the Director General of the National Council for Arts and Culture (NCAC), Otunba Olusegun Runsewe together with his aides inspected the venue everyday to ensure that the expo met all the required international standards.

In tandem with the aims of INAC expo which was initiated in 2008 to showcase the rich and unique collection of African arts and crafts, the organisers made sure that all the participating countries and private entities keyed into the Director General’s  6-point agenda namely: to make culture Nigeria’s new oil; to develop the creative industries to serve as a resource for job creation and economic empowerment in the interest of all; to empower Nigerians through free skills acquisition; to promote corporate social responsibility through medical services at the council’s major events; to use culture as a panacea for promoting peace, social integration, and national unity through NAFEST, sports and cultural activities; and to promote international cultural diplomacy through appropriate liaison and synergy with members of the diplomatic community in Nigeria.

Runsewe, who was Clad in traditional attire received a thundering ovation as he mounted the podium to give his opening address. The NCAC boss, who saw the excitement in the audience, explained that the decision to return this year’s INAC expo to its traditional indoor setting was due to the gradual reduction in the menace of COVID-19 pandemic. According to him, the last two editions of the expo were held as ‘Drive-In’ as a result of the COVID-19 pandemic.

“I am happy to note that the partnership and participation of the international audience, particularly members of the diplomatic community in Nigeria, has been quite encouraging. It is heartwarming that 32 countries attended the year 2022 edition of our Pre-INAC Dinner, a programme that sets the pace for this very important edition. Permit me to specially express our profound appreciation to members of the diplomatic community for this wonderful support and partnership,” the NCAC boss said.

Runsewe, who doubles as President of the World Crafts Council (African Region), said culture and crafts are important tools deployed to tell Nigeria’s positive story to the world, adding that culture and crafts are capable of reducing crimes and unemployment across the globe. “We must continue to use culture in dousing tension, suppressing violent uprising and propagating  peace in our land.”

“We have a brand that unites us and we are happy to export our culture and crafts to other parts of the world. Participants will gain a lot from the entertainment and business contacts during this expo.”

The NCAC boss, who expressed profound gratitude to President Muhammadu Buhari for his unalloyed support, encouragement and political will which he said made it possible to sustain the expo, thanked Minister of Information and Culture, Alhaji Lai Mohammed; Chairman, Senate Committee on Culture and Tourism, Senator Rochas Okorocha; and Chairman, House Committee on Culture and Tourism, Hon. Ogbeide-Ihama Omoregie, for their executive and legislative backing and support.

“We are celebrating our strengths, not our weaknesses. We shouldn’t  allow others to tell our story, instead we should be the ones telling our story.

“There is therefore the compelling need for those of us in the arts and culture sector to use our various cultures and cultural manifestations to engender sustainable peace,” Runsewe said.

The INAC investment forum, which is the intellectual segment of the expo, which was held on the second day, was well attended.

Bakut, who was represented by the Director, Research and Policy Analysis at NIPCR, Dr. Joseph Ochogwu, said the timing and topic for the investment forum are both apt and relevant considering the current challenges bedeviling Nigeria and most parts of the world.

According to him, the rich cultural diversities in Nigeria apart from having capacity to bring about the much needed national development, when properly harnessed would end the present insurgency, banditry, kidnapping and other violent crimes ravaging most parts of the country.

The NIPCR boss further noted that culture can enhance peaceful coexistence and create the enabling environment for the creative industry to contribute to the economic development of Nigeria.

According to him, “Peace can only be achieved through authentic justice, equity, and the honouring of our respective cultural differences of every one of us in the country. The Institute for Peace and Conflict Resolution has been involved in the business of Building a “Culture of Peace” in our society. At the global level, the United Nations system and other stakeholders have equally been working tirelessly towards entrenching a ‘Culture of Peacemaking’ in the world,” Bakut said.

Both Yahuza and Ande collaborated Bakut’s position that culture is a panacea for national development.

Harvests of commendations for Runsewe

In her goodwill message at the closing ceremony, the Cuba Ambassador to Nigeria, Clara M. Pulido-Escandell, said that Cubans are proud of the history and common culture they shared with Nigeria.

Pulido-Escandell, who presented a souvenir to Runsewe, pledged her country’s readiness to support 2023 INAC expo to be bigger and better. She commended Runsewe for his resourcefulness especially in promoting Nigeria’s culture.

“Otunba Runsewe is not only a cultural ambassador, he is a doctor of the soul. He has been able to unite the diplomatic community through culture,” Pulido-Escandell said.

Also, the Ambassador of Venezuela David Nieves Velasquez Caraballo, who presented Runsewe with a souvenir, said that Venezuela and Nigeria have a lot of similarities in terms of culture and food.

“INAC 2022 expo is very successful. The initiative is one of the strong ways to strengthen our ties and vision of the New World and we remember our strong African roots,” he said.

The Cultural Counselor of the China Cultural Centre, Mr. Li Xuda, who praised Runsewe for promoting the arts and crafts of Nigeria to the outside world, said “Nigerian people are proud of their arts and crafts, language and music. INAC 2022 expo is bigger and shows Nigeria beyond our imagination.”

Gloria Corina Anak Peter Tiwet, Malaysia Ambassador to Nigeria, who was clad in her traditional attire at the closing ceremony praised Runsewe for hosting a successful expo.

The Dean of the Diplomatic Community in Nigeria, and Ambassador of Cameroon Republic, His Excellency, Salaheddine Ibrahima, did not hide his joy on the success of INAC 2022.

Apart from being treated to different traditional dances and music from Venezuela and Ogun State on their Special Day, the ambassadors and other guests were taken to a corner in the hall where they were all served sumptuous meals from the Ogun State team. There were enough drinks to go round.

Apart from the dancing competition where a popular Buga song from Kizz Daniel serenaded the whole hall and winners awarded prizes, cultural troupes from Edo, Anambra, Ogun, Kaduna were also displayed to the admiration of guests.

Runsewe, who told the Diplomatic Community at the closing ceremony of 2022 INAC expo to discard all the negative stories about Nigeria, assured them that Nigeria is safe for foreign direct investments (FDIs).