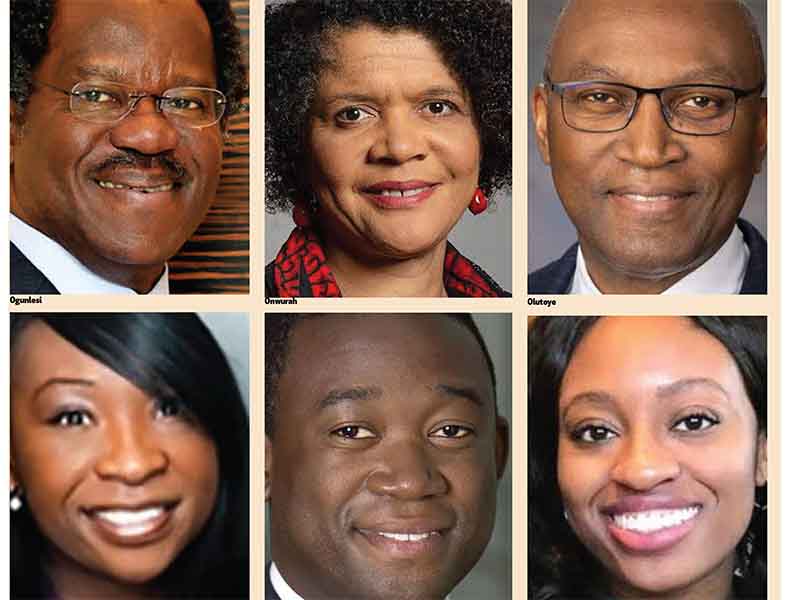 Vanessa Obioha profiles 10 Nigerians who have defied the stereotypical narrative about Nigeria in their respective fields and contributed positively to their host communities,  making a difference

The popular narrative peddled about Nigeria has been stereotypical for so many years. Nigerians have been portrayed as victims of corruption, poor leadership, poverty, diseases, conflicts and many other vices. While the veracity of these narratives is debatable, many Nigerians home and abroad have shown that there is a whole lot more to the West African nation and its people than the often peddled narratives. From technology to entertainment and academia, these Nigerians have contributed positively to their host communities and made a difference where it matters.

They are leading innovations, shaping governance and changing the narrative globally. In the spirit of acknowledging achievements and spotlighting the results of hard work and determination, here is a list of ten Nigerians making exploits in the diaspora:

An indigene of Sagamu, Ogun state, Adebayo Ogunlesi is an investment banker and lawyer who owns five airports in the United Kingdom, three of which he bought within six years.

He is currently the Chairman and Managing Partner at the private equity firm Global Infrastructure Partners (GIP), New York — a company that manages a portfolio of combined annual revenue greater than $46 billion, and investments of over $51 billion for its investors.

Married with two children, Ogunlesi has received numerous awards for his giant strides and is an alumnus of Ivy League schools including Oxford University, Harvard Law School, and Harvard Business School.

Adebayo Adeleke is a dynamic leader with global insights on a wide array of issues, including emerging markets, risk management, security, supply chain management and logistics, leadership, geopolitics, diversity and inclusion. A seasoned combat veteran of the United States Army with 20 years of service, Adeleke is a sterling example of how immigrants have contributed to America’s progress and development.

He is the creator of the Unfettered Podcast, a platform which captures the unfiltered narration of failures, triumphs, and lessons that characterise the life of industry leaders and celebrated heroes. Each episode of the podcast boasts profound wisdom and insight essential to the creation of formidable economic policies, sustainable governance, systematic leadership, and an impeccable value system.

One of the attorneys selected to the White House counsel’s office by President Joe Biden, Funmi Badejo aids the President in updating the federal judiciary and putting his stamp on it.

Prior to her role as attorney at the White House counsel’s office for the Biden administration, Badejo served as general counsel to James E. Clyburn, the House majority whip, and headed the select subcommittee on the Coronavirus outbreak.

Badejo has also held positions as ethics counsel at the White House counsel’s office, counsel for policy to the Assistant Attorney General in the civil division of the U.S. Department of Justice, and Attorney Advisor at the Administrative Conference of the United States during the Obama-Biden administration.

Esther Agbaje defeated Raymond Dehn in the 2020 election to become a member of the Minnesota House of Representatives. She is the first Nigerian-American legislator elected in Minnesota.

An associate attorney at Ciresi Conlin LLP where she specializes in general civil litigation and medical malpractice, Agbaje represents District 59B in Hennepin County, which includes parts of Minneapolis’ north and downtown.

Agbaje previously worked as a Foreign Service Officer for the US Department of State.

Ayo Tometi, formerly known as Opal Tometi, is a Nigerian-American Yoruba human rights activist who also works as a writer, strategist, and community builder. She helped establish the Black Lives Matter movement (BLM) and has for nine years served in various capacities in the Black Alliance for Just Immigration (BAJI) — the nation’s first organisation dedicated to advancing the rights of immigrants of African heritage.

Tometi uses BLM to draw attention to the racist injustices that black people contend with. In the beginning, she was a vocal supporter of human rights causes in her small-town neighbourhood. She has advocated for the advancement of racial justice, migrant rights, and human rights throughout the world.

Additionally, Tometi has managed cases for victims of domestic abuse. She was included in Time Magazine’s 100 Most Influential People of 2020 and the BBC’s 100 Women announced in November 2020.

Prior to this, Onwurah was head of telecoms technology at Ofcom before entering politics, with a focus on broadband provision. Along with Hannah Dee, Sarah Wood, and Sherry Coutu, Onwurah was inducted into the Computer Weekly’s ‘Most Influential Women in UK IT’ Hall of Fame in 2018. In 2020, Onwurah was named an Honorary Fellow of the British Science Association.

Like most Nigerians leaving the country in search of greener pastures, Adeyemo’s parents emigrated to the U.S. in order to give him and his siblings a better chance at life. He would later attend the University of California at Berkeley, where he obtained a bachelor of arts degree before being accepted to Yale Law School where he earned his Juris Doctor.

Adeyemo was appointed as the U.S. Deputy Secretary by the 46th President of the United States of America, Joe Biden. The 41-year-old Nigerian-American economist was also the Deputy National Security Adviser for International under the administration of the previous government led by President Barack Obama.

Having developed desirable leadership qualities over time, he was described by the Board’s Chairman Martin Nesbitt in a press release as “The ideal person to help lead the Foundation team as we continue to grow the impact of our global civic engagement programmes and advance the Obama Presidential Center.”

Furthermore, Nesbitt stated that “given his executive experience in both the public and private sectors and previous service with President Obama, Wally is well positioned to help us continue to translate our sky-high ambitions into operational reality through daily leadership of our talented staff.”

Born in Nigeria and trained in the U.S.,  Dr Oluyinka Olutoye is a famed pediatric surgeon known for successfully conducting a sacrococcygeal teratoma — an operation where the baby was taken out of the uterus for 20 minutes during the five-hour procedure to remove the tumour and was then put back inside for the remainder of the gestation period before being delivered alive without any incident.

For his contribution to global society,  Olutoye was recently conferred the prestigious Nigerian National Order of Merit (NNOM) Award for 2020 by president Muhammad Buhari, alongside two other individuals.

Olutoye is an alumnus of Obafemi Awolowo University, Ile-Ife, Nigeria, where he obtained his medical degree in 1988 and a PhD in anatomy from Virginia Commonwealth University in Richmond, VA, in 1996. He later completed his residency in general surgery at the Medical College of Virginia Hospitals, Virginia Commonwealth University, and his fellowship in pediatric surgery at The Children’s Hospital of Philadelphia and the University of Pennsylvania School of Medicine in Philadelphia.

A Professor of Pediatrics and Neonatology at the University of Pennsylvania Medical School, Peterside works as a consultant at one of the best children’s hospitals in the world, the Children’s Hospital of Philadelphia.

For his medical strides, in 2020, Peterside was named America’s Best Physician by the US National Consumer Advisory Board.

An indigene of Edo state, 28 years old Osaremen Okolo was appointed as a Policy Advisor for Public Health and Equity on COVID-related matters by the US President-elect (now President), Joe Biden.

Before that, she served as Legislative Aide for Health Policy on the US Senate Committee on Health, Education, Labor, and Pensions (HELP) for Ranking Member Patty Murray of Washington, and also served as Senior Health Policy Advisor to U.S. Representative Jan Schakowsky of Illinois.