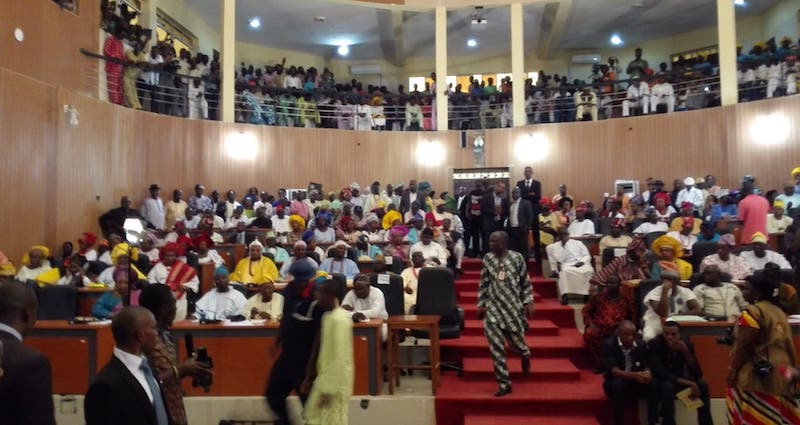 The Assembly at the plenary presided over by the Speaker, Bamidele Oleyelogun, directed the Independent National Electoral Commission (INEC) to conduct a bye-election within 90 days in their constituencies.

According to the Speaker, the decision followed a letter from the state Chairman of All Progressives Congress (APC), Ade Adetimehin, to declare their seats vacant as the duo were alleged to have fully participated in the activities of another political party, the Peoples Democratic Party (PDP) during the last gubernatorial election and Assembly primaries in the state.

Oleyelogun  said  based on the APC letter and the Assembly having acted in accordance with Section 109(1)and (g) of the 1999 Constitution as amended, “the Assembly was declaring their seats vacant while a letter should be written to INEC to conduct a bye-election into the seats within 90 days.”

He directed that their benefits and entitlements be stopped forthwith and all government property in their possession returned. The Speaker affirmed that there was no crisis or division from ward to the national
level of APC to warrant their actions.

Meanwhile, a bill for a law to provide for the establishment of multi-door court and other matters connected thereto 2022 has been passed into law.

The passage followed the submission of report by the Assembly Committee on Judiciary for consideration and approval at the plenary.

Presenting the report, the committee said that the establishment of Ondo State Multi-Door Court House is long overdue and a welcome development by all stakeholders.

It noted that if the bill is eventually passed into law, it will create a window/avenue for alternative dispute resolution that will include the entire range of alternative to litigation that involves a third party intervention to assist in the resolution of a dispute.

According to the report, the bill, if passed into law will further enhance easy access to justice by providing alternative mechanism to settlement of litigation in the resolution of disputes in the state and also minimise frustration and delays in Justice delivery by providing a standard legal framework for the fair and efficient settlement of dispute through alternative dispute resolution.

In the committee’s observation, the bill will promote the growth and effective functioning of the justice system in the state through alternative Dispute Resolution methods.

The Majority Leader, Oluwole Ogunmolasuyi, then moved the motion for the bills to be passed into law, and was seconded by the lawmaker representing Akure South constituency II, Sunday Olajide.