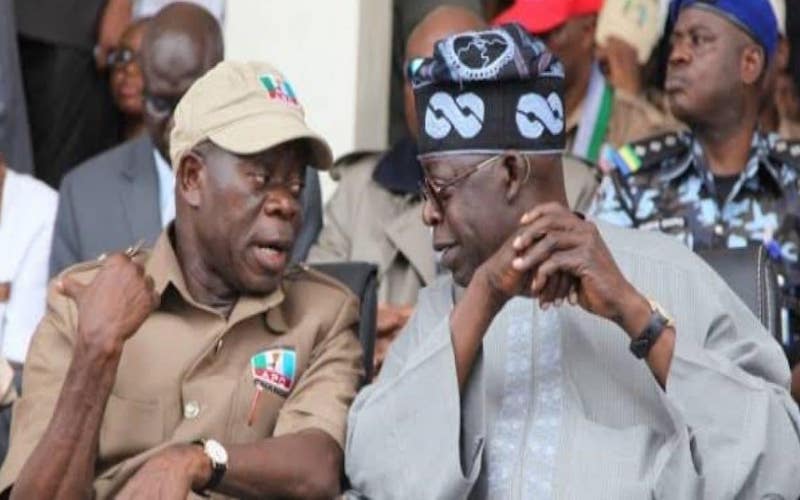 Not many Nigerians were convinced last week when a former National Chairman of the All Progressives Congress (APC), Adams Oshiomhole, attempted to distance the presidential candidate of the party, Senator Bola Tinubu, from the lacklustre performance of President Muhammadu Buhari in the last seven years, Adedayo Akinwale writes

The former National Chairman of the All Progressives Congress (APC), Adams Oshiomhole, stirred controversy last week when he absolved the party’s presidential candidate, Senator Bola Ahmed Tinubu, of the blame for the poor performance of President Muhammadu Buhari’s administration.

Oshiomhole, who featured in a programme on ARISE NEWS Channel, stressed that it would be unfair to blame the former Lagos State governor for Buhari’s performance because he never held any position in the government.

Tinubu, who had boasted publicly in Abeokuta, Ogun State that he installed Buhari in 2015, received scathing criticisms from Nigerians following the abysmal performance of the government on insecurity and economy in the last seven years.

Buhari, who was Nigeria’s military Head of State between 1983 and 1984, first contested the Presidency on the platform of the defunct All Peoples Party (APP) in 2003 and lost to the Peoples Democratic Party (PDP) candidate, Chief Olusegun Obasanjo.

In 2007, he lost to another PDP candidate, the late Umaru Musa Yar’Adua. In 2011, he formed a new party, the Congress for Progressives Change (CPC), contested on its platform but lost to Goodluck Jonathan of the PDP.

In 2014, four political parties, the CPC, the Action Congress of Nigeria (ACN), the All Nigeria Peoples Party (ANPP) and a faction of the All Progressives Grand Alliance (APGA), merged to form the APC on whose platform Buhari contested and finally won 2015 the presidential election.

Tinubu had recently opened up on his role in the emergence of Buhari as the President in 2015. While addressing the Ogun State APC delegates at the Presidential Lodge, Abeokuta, Buhari, after losing the 2003, 2007 and 2011 presidential elections,  vowed not to contest again.

The former governor of Lagos State said he went to Katsina to persuade Buhari to contest and subsequently supported him to win in 2015. He boastfully told his audience that he brought the president out of political retirement, and assisted him to emerge as president.

But ahead of the elections, the APC presidential candidate has come under fire on two fronts. While he is battling the key role he played in assisting Buhari to power, he is also facing criticisms for choosing a fellow Muslim and former Governor of Borno State, Kashim Shettima as his running mate.

The Buhari-led administration in the eyes of many is the worst the nation has ever experienced since 1999. From the banditry and insurgency that have characterised the polity leading to numerous deaths and homelessness, to rising inflation due to poor management of the economy and massive corruption, there is a level of fear pervading every part of society.

In the past seven years, Nigerians have had nothing but diatribes and regrets. The hope of a better life as promised by Buhari during his electioneering year in 2014 has turned into despair as daily reports of insecurity, economic hardship and corruption continue to confront Nigerians.

In both the northern and southern parts of the country, so many lives have been lost in recent times. Even those who were abducted by dare-devil bandits from an Abuja-Kaduna-bound train over months ago are still in the captivity of the terrorists. The disturbing trend is becoming worrisome.

Against this backdrop, many Nigerians have been wondering how the APC presidential candidate would convince the people to vote for the party given that President Buhari’s performance sheet is filled with red marks. More so, how will he reignite hope in his party without mentioning how he has contributed to the problems?

But Oshiomhole stressed that Tinubu should not be blamed for Buhari’s performance because the former Lagos State governor never participated in governance at any level in the current federal administration. He stressed that it would be unfair for anyone to hold Tinubu responsible for the performance, policies, and policy implementation of the current government.

He said: “You can’t say someone who never in any way participated in government should be credited with the outcome of government policies or be blamed either way. I think in apportioning blame or crediting people, you look at their role. It is a fact that Asiwaju by himself said, yes, he co-founded the APC.

“I was a co-founding governor of the APC along with Fashola and other governors but he never participated in governance. He never held any position in government and didn’t carry out a contract on behalf of the government. So how can you credit him either way? This is just being fair.”

Many believe that Oshiomhole missed the point because during the party’s campaigns ahead of the primaries, Tinubu at a grand rally at the Mobolaji Johnson Arena, Onikan in Lagos, promised Nigerians that he would deliver a united and banditry-free Nigeria if elected president. He told the gathered youths under the aegis of Progressive Youth of South-West who had declared their support for his presidential aspiration, that Nigerians were tired of excuses and lamentations of the past.

The APC presidential candidate had apparently admitted that the present administration failed to unite Nigerians and make the country bandit-free. To sell himself appropriately to the youths as the saviour Nigeria desperately needs, the National Leader of the APC tackled Buhari on his comment four years ago about Nigerian youths being indolent.

Buhari made the popular expression “Nigerian youths are lazy” during a Commonwealth Business Forum in London in 2018. He described Nigerian youths as lazy folks who only want the good things of life without working for them.

“More than 60 per cent of the population is below 30, a lot of them haven’t been to school and they are claiming that Nigeria is an oil-producing country, therefore, they should sit and do nothing, and get housing, healthcare, education free,”  Buhari was quoted as saying at the conference.

During the rally, Tinubu indirectly responded to Buhari, telling the youths that they cannot be blamed for being “lazy” with the erratic electricity supply in the country. He said no nation can witness “rapid development” without electricity, adding that the country cannot continue to give “excuses” for failure to generate a stable power supply. He noted that the country is blessed with enough gas that can be used to generate electricity and even export to European countries.

He further urged the youths to revalidate their Permanent Voters’ Cards and be ready to vote in the forthcoming 2023 general elections.

Many observers believe that Oshiomhole’s statement is the hypocrisy the APC and Tinubu handlers are known for. They wonder if Tinubu was in government under Babatunde Fashola, Akinwumi Ambode and Babajide Sanwo-Olu as governors of Lagos State when he took credit for the performances. They also wonder why he should not be held responsible for Buhari’s performance whom he boasted to have installed.

“Tinubu claimed credit for the successes of Fashola Ambode and Sanwo-Olu recorded in Lagos. Was he in their governments when he did it? Now he is turning around to say that he was not in the Buhari government, which he personally boasted and claimed in Abeokuta to have installed. What a shame! I don’t know why it should be Oshiomhole that would be sent to tell Nigerians this. And yet he boldly sat in the studio and told Nigerians that Tinubu cannot be held responsible for Buhari’s performance. This is the height of hypocrisy of APC and Tinubu’s handlers are known for,” said Folarin Adeyemi, a political observer.

An analyst, Mr. Abraham Ona, wondered why the former Edo State governor would extricate Tinubu from Buhari’s failure when he admitted that he brought him to power.

“Oshiomhole was in Abeokuta when his principal declared he put Buhari in Aso Rock. What is this man talking about? His ignorance, denial and deception cannot help this time around that both young and old are tired of you people and have woken up from slumber,” he said.

Also, another political commentator, Ugo Emeka said when a former party chairman is running away from the record of his own party in government, it means then there is a problem.

“There is really fire on the mountain when a former party chairman is running away from the record of his own party in government. How in the world can this man summon the courage to ask Nigerians to vote for APC? Fifteen years ago, if anyone had ever prophesied to me that Oshiomhole would turn into what he has currently become, I would have believed the prophet was a lunatic. But it is happening now.”