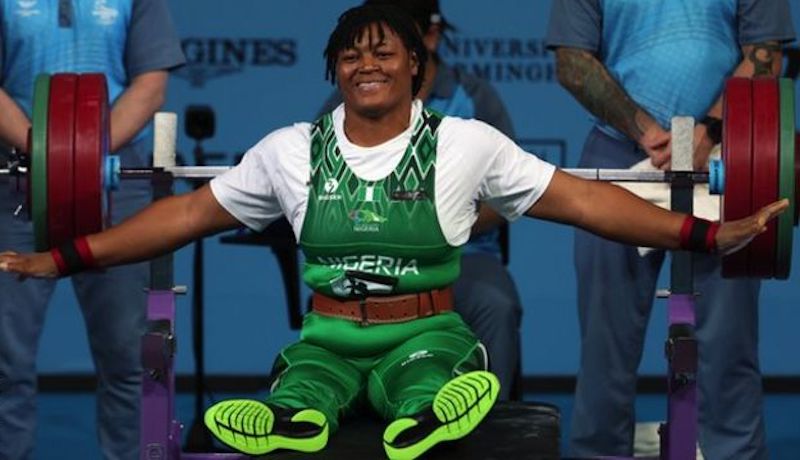 Folashade Oluwafemiayo broke her own World Record, to win gold for Team Nigeria in the women’s Heavyweight Powerlifting event. The Paralympic champion was in an incredible form, lifting a new World Record of 155kg to clinch the gold medal, surprisingly her first gold medal at the Commonwealth Games

Oluwafemiayo says her passion for para powerlifting helped her set a new world record and win the women’s heavyweight category at the Commonwealth Games.

The 37-year-old lifted 155kgs with her final attempt to end with 123.4 points as compatriot Bose Omolayo took silver.

“I feel so good to be the person to set another record, though I owned the record. I was determined that I would add to the record.

“I thank my lovely husband for being there for me. Whenever I say I’m not going for training, he says ‘Let’s go’.

“This is my first Commonwealth Games and it is special. I feel good for Nigeria – winning gold and silver is great.”

Oluwafemiayo who weighs 83.50kg, racked up a cumulative 123.4 points, and was clearly ahead of other Powerlifters, laying down the marker when she opened up with a lift of 130k, going on to improve with an additional 20kg and then 5kg more to emerge with a clear victory.

Before coming into the competition, Oluwafemiayo had a previous World Record of 152.5kg which she set at Tokyo 2020 Olympics. She now looks like her own biggest competitor breaking her WRs at back to back championships!

Innocent Nnamdi had set the tone for what would be a good outing for Nigerian Powerlifters, winning the first medal in the men’s Lightweight category. Although he failed his round attempt of 190kg, when he did lift it on his 2nd round attempt, he shot up into the medal winning position and it remained that way as he held on for the Bronze.

If Nnamdi had not secured Bronze, it would have gone to his compatriot, Thomas Kure who finished 4th not quite far off the medal positions, lifting 180kg and just narrowly missing out.

Ikechukwu Obichukwu crowned what had been a spectacular day for his country, winning the Silver medal in men’s Heavyweight Powerlifting. He lifted 190kg, and his medal took Nigeria’s tally to an overall four medals from three Powerlifting events contested for.

Nigeria has consistently been a strong Powerlifting nation, constantly win medals at major championships they compete in. With just three events contested for at the 2022 Commonwealth Games in Birmingham, it is not surprising that they still emerged tops with the highest medal tally overall, considering that they lost two athletes to disqualifications in women’s Lightweight categories.

It will surely take some beating for the Nigerian Powerlifters to be knocked off their perch in this event.

Nigeria began the day with heartbreak for Latifat Tijani and Onyinyechi Gift Mark, but the 86 kilograms Paralympic champion Oluwafemiayo ensured there was a victory for Nigeria to celebrate, and in some style too as she broke the world record for her weight division in the women’s heavyweight final.

Oluwafemiayo had already secured gold with lifts of 130kg and 150kg, but followed it with a sensational 155kg to score 123.4 points.

Compatriot Bose Omolayo, the 79kg Paralympic champion, took second with 115.2 points from a 142kg lift on her second attempt.

Australia’s Hani Watson rounded off the podium on 98.5, climbing from 120kg to 127kg on her final attempt.

The day began with the shock news that Tokyo 2020 under-45kg gold medallist Tijani and fellow Nigerian powerlifter Mark had been disqualified from the women’s lightweight event after arriving 25 minutes late, a decision which left both athletes visibly distraught.

A shellshocked home crowd watched England’s Zoe Newson put in a superb performance to take gold with 102.2 points from successful lifts of 97kg, 99kg and 101kg.

Compatriot Olivia Broome placed second with 100.0 after improving her lifts from 105kg to 109kg and then to 111kg.

Hellen Wawira Kariuki of Kenya completed the podium with 98.5 pojnts from a 97kg lift on her second attempt.