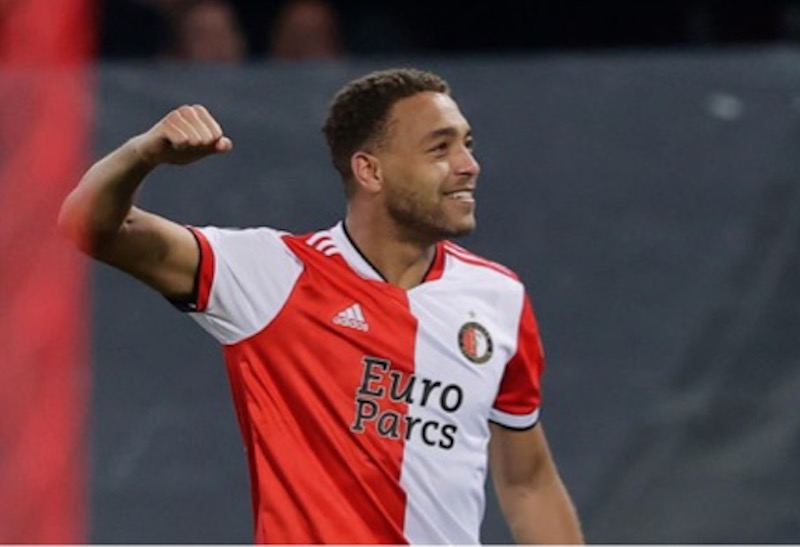 With Feyenoord not able to meet up with the €4 million asking price by Genk on Cyriel Dessers despite having the first offer of refusal on the Nigerian international, it is Serie A new boys- US Cremonese, that took the initiative to cash-in on the Nigerian. With most promoted teams having to struggle to retain their Serie A status, it could be tough call for the Super Eagles striker to ensure the Tigers remain in Serie A

Cyriel Dessers was so much impressive in his loan spell at Feyenoord last season that the club’s egg heads wanted to retain him but meeting his €4 million price tag was however an issue for the cash-strapped Dutch side.

Though the fans of the Pride of the South took it upon themselves to contribute to fund his permanent stay at the Feyenoord Arena, FIFA however showed its disdain against such an adventure.

In spite of Feyenoord having paraded such big names like Pierre van Hooijdonk, Dirk Kuijt, Harry Bild, and Robin van Persie in the past, none had scored more goals than the Nigerian representing the club at the continental level, with the Super Eagle scoring 10 goals in the Europa Conference League making him the highest goal scorer in the competition.

Serie A new boys, US Cremonese have stepped up a gear in their bid to sign Dessers from Belgian top side Racing Genk.

But heading towards their first Serie  A campaign in decades, the Tigers are still unsatisfied with their attacking options.

Dessers is considered a priority signing, and negotiations between KRC Genk and Cremonese are drawing to a positive conclusion.

According to respected Italian transfer guru Gianluca Di Marzio, Cremonese’s sporting director Simone Giacchetta traveled to Belgium on Monday to iron out the final details regarding a deal for Dessers.

Agreeing on personal terms with Dessers would not be a problem with the Nigeria international keen on a ‘dream’ move to Serie A.

His arrival in the Italian top flight will make Dessers the third Nigerian to sign for a Serie A club during this transfer window.

Earlier in July, Super Eagles full-back Tyronne Ebuehi completed a permanent move from Benfica to FC Empoli on a free transfer. The exciting defender is no stranger to Serie A, having spent last season on loan at Venezia.

Dessers has severally stated that he wants to leave Belgian club KRC Genk this summer for a move abroad.

The 27-year-old forward believes that this might be his best chance to secure a transfer away from the club to other leagues in Europe.

Dessers revealed his decision despite his impressive start to the Belgian Pro League season that has seen him bag three goals and one assist in just two games.

The Super Eagles striker was on target again last Sunday as he scored two goals and make one assist to hand Genk their first win of the season against Standard Liege.

In his post-match comments Dessers addressed the previous rumours that he met with FC Copenhagen officials during the past week with a cheeky comment.

The Nigerian international joked that if he visits the Spanish city of Barcelona, why would no one then link him with a move to FC Barcelona.

“If I’m in Barcelona in the summer, no one will link me to Barca. I don’t know why that is,” Dessers said.

The Super Eagles striker confirmed that he is enjoying his time and football at Genk at the moment, especially with the new manager Wouter Vrancken.

However, Dessers suggested that he might prefer to leave Genk this summer with now being the last opportunity he might get for a move abroad.

Dessers said: “I’m really enjoying myself here, with this team and this trainer, who makes a great impression on me.”

“But yes, I am 27 years old, I still have two years on my contract. Maybe now is the time to take the step abroad. Although I don’t decide on that alone.”

The Nigerian international was on loan at Dutch Eredivisie side Feyenoord last season where he shone in the UEFA Europa Conference League, scoring 10 goals in 13 matches to take the club to the final.

The impression he made on Feyenoord’s fans was so huge that they started raising funds to bankroll his transfer fee.

The supporters of the Dutch side, were hell-bent on having their Nigerian import continue his adventure at the club at all cost that they started contributing to meet the €4 million asking price.

The Rotterdammers signed Dessers on a loan deal from Genk last summer, with an option to purchase him before the end of his yearlong spell.

But due to their financial limitations, Feyenoord were not interested in taking that option for the 27-year-old during the first half of the campaign.

Dessers became the first man to hit double digits goals in the maiden edition of the Europa Conference League when he grabbed a brace to power Feyenoord to a 3-2 win over Olympique de Marseille.

Dessers was a nightmare to many defenders and goalkeepers on the continent last season after an excellent goalscoring run for Feyenoord in the Europa Conference League.

Dessers’ 10-goal haul has also lifted him into Feyenoord’s record books, as no striker has ever scored that many for the Dutch side in any European competition.

How well the Super Eagles striker could help US Cremonese remain in the Italian top flight remains to be seen with statistics not in his favour.