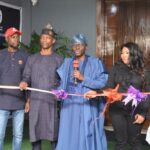 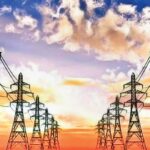 Nadine Siegert, the director, Goethe Institute Nigeria kept the introductory remarks short but not without seeking for a one minute of silence for Juan Pablo Echeverri- an artist and one of the team that brought Fragile exhibition to Nigeria with the German photographer, Wolfgang Tillmans. A pointer to the fragility of human life, the opening to “Reading with Fragile” set the mood for the night at the Art Twenty-One space inside Eko Hotel and Suites where the book reading was set side-by-side with light refreshments.

With Jahman Anikulapo, the culture activist as the night’s compere, the two authors shared their stories with the audience simultaneously as they read and fielded questions from the readers.

Boom Boom, a children’s literature, was the first to be interrogated by the audience. Built around the character of an eight-year-old, Osaik and how he confronted the scourge of sickle cell anemia that killed his mother. A deep connection was established with the character in the mind of Faith Uche Stevens also known as DJ Elektra, a member of the audience who couldn’t read the book due to her medical condition. The only surviving child of her parents’ five children, she also lives with photo-sensitive epilepsy. DJ Elektra asked the writer, Jude Idada, what motivated the story in ‘Boom Boom.’

“I was inspired from my youth,” Idada who won the NLNG Nigeria Prize for Literature in 2019 explained, having comforted the DJ for her loss. “When I was studying for UME, I had a friend of mine called Tunde. We never knew he had sickle cell anemia. We had to read for the exams. I wonder if it is the same way now, no matter how much you read for exams, you’d still look for ‘expo’ and hope that the papers had leaked.

“I had finished reading and it was a Friday night and I was driving around the area looking for leaked papers. Someone told us it was in FESTAC. We got the papers at 1am but they ended up being fake. We dropped off Tunde at his house around 2am. The next day, we went for the paper and we didn’t see Tunde after the exams so we went to look for him. When we got to his house, there was a large crowd gathered there. We went upstairs to see his mum and the first thing she said was ‘See what your friend had done to me.’ They said he died 45mins after we dropped him off. He went into a crisis and didn’t make it. That was my first poignant experience. Of course, I knew that Tunde wanted to go to the university as much as I wanted to.”

Another instance cited was that of his friend who was a sickle cell carrier, with the genotype AS. He proceeded to marry a woman who was also a carrier and ended up with two daughters-living with sickle cell anemia.

Thus, Boom Boom creates awareness on the severity of the condition and why deciding not to marry may be the wisest move for intending couples who are carriers of the sickle cell genes.

“I am a satirist,” Idada continued. “I hope that when I hold up the mirror to reflect the society, they can see and hopefully, make a change.”

Beyond being a playwright, screenwriter, cultural activist who lives in Canada and Nigeria, Idada keeps the reading audience captivated with his frequent Facebook posts- a microblogging series that satirises the social realities in Nigeria.

On his part, Abubakar Adam Ibrahim who advanced from being a journalist to an award-winning writer read from his book, A Season of Crimson Blossoms, which fetched him the coveted $100,000 dollars at the 2016 Nigeria prize for literature. Amongst other honours, he had received the Michael Elliott Award for Excellence in African Storytelling at the International Centre for Journalists in New York.

He chose to read from his award-winning piece, A Season of Crimson Blossoms because of its resonance with the theme of the photography exhibition by Wolfgang Tillmans which had been incorporated in the event.

“The story I am to pick from is about the fragility of the people,” he continued after throwing banters at Idada for winning the prize money at the time Naira devalued against the US dollar. “The fact that we are in a fragile nation, filled with fragile people. In a way, we are all broken. But somehow we patched up together and kept pushing even though we are fragile, fractured and broken.”

Reflecting on the central character, Binta Zubairu who got entangled with her rapist, Ibrahim told the audience that the relationship was not a case of love.

“For Binta, all her life she had wanted to blossom but was caged by her upbringing and the expectations that the society placed on her. Up till that point, she had done everything that was required of her,” he explained.

Most of those gathered at the reading session had not read the book which led to conversations about the reading culture in Nigeria which Ibrahim couldn’t help but condemn.

“We have a fundamental problem with reading. We have made reading so uncool that people don’t read or don’t want to be seen reading. Now, people just want to be on ‘tik tok.’ That’s good for entertainment, yes but maybe not intellectually,” he said.

The need to have an enabling infrastructure to promote the reading culture was broached. The nation is in darkness. Most homes run power generators. Public libraries are almost non-existent. With the 2023 general elections in view, Ibrahim tasked Nigerians with holding the government accountable for investing in the knowledge economy.

“This is an opportunity to hold these people and say ‘What plans do you have to build libraries?”

In her earlier remarks, Siegert expressed the commitment of Goethe Institut Nigeria to promote literature and the reading culture.

“In the future, we look forward to events on literature and with writers. We have a library that was burnt down but we are currently building up the library again and we will have more books in the future. Our library is open to writers and readers,” she assured.

“It is a great opportunity for us at NLNG to see how words for our writers are meeting pictures,” he said, referring to the photography exhibition ‘Fragile.’ “African Art is fluid. For us at NLNG, we have a tagline that says, ‘We’re helping to build a better Nigeria.’ And that phrase we take seriously because what we do in terms of our business to a large extent grew from not having gas flares in Nigeria. We are monetizing gas that would ordinarily be flared, convert to energy and earn foreign exchange for Nigeria. In the midst of all of that, an area where we focus seriously is how we promote art literature and science.

“We see this as an opportunity to further enhance and entrench the values of art literature, singing, dancing and drumming. We are happy to partner with interested parties to promote Nigeria arts and science.”