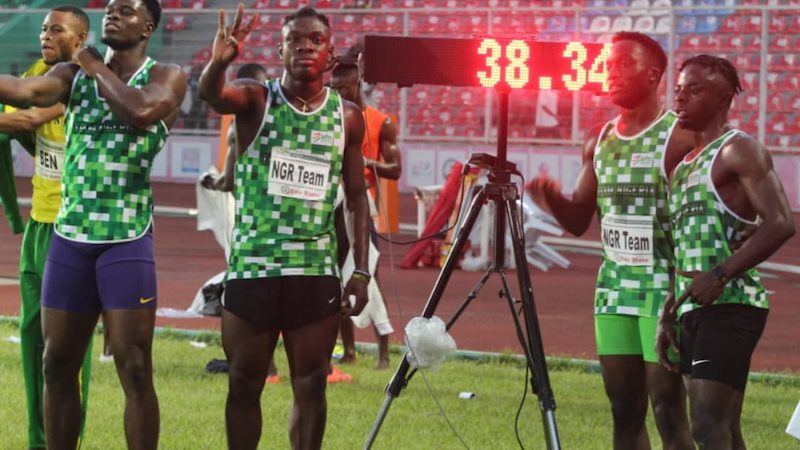 Nigeria’s chances of qualifying for the men’s 4x100m relay at the Commonwealth Games scheduled to hold next month in Birmingham, United Kingdom now hangs in the balance after the country’s quartet failed to crack the minimum  37.50secs that would have moved the team to comfort zone.

On the final day of the Commonwealth Games and World Championships Trials in Benin City yesterday, the Nigerian quartet ran a dismal 38.84secs to win the race with both Ghana and Benin Republic teams trailing. The victory could not be celebrated as the time failed to meet expectations of athletics aficionados including Sports Minister, Chief Sunday Dare at the Samuel Ogbemudia Stadium.

Earlier on Friday, the Nigerian sprint relay team had ran encouraging 38.38secs to give impression that the lads were capable of lowering the time further. Nigeria moved above South Africa to be in the 16th spot.

But at press time last night, Nigeria had dropped out of the top 16 ranking to 17th with possibilities of going down further following several qualification races across the globe last night.

The quartet of Favour Ashe, Godson Brume, Alaba Akintola and Udodi Onwuzurike were involved in the hunt for the qualification ticket to the sprint relay at the Commonwealth Games next month.

Also yesterday, it was not all gloom as Ese Brume won the women’s long jump event with an encouraging 6.89m jump. The World and Olympic bronze medalist sent signals that she is capable of repeating her feat at the 2014 Games in Glasgow when the chips are down in Birmingham.