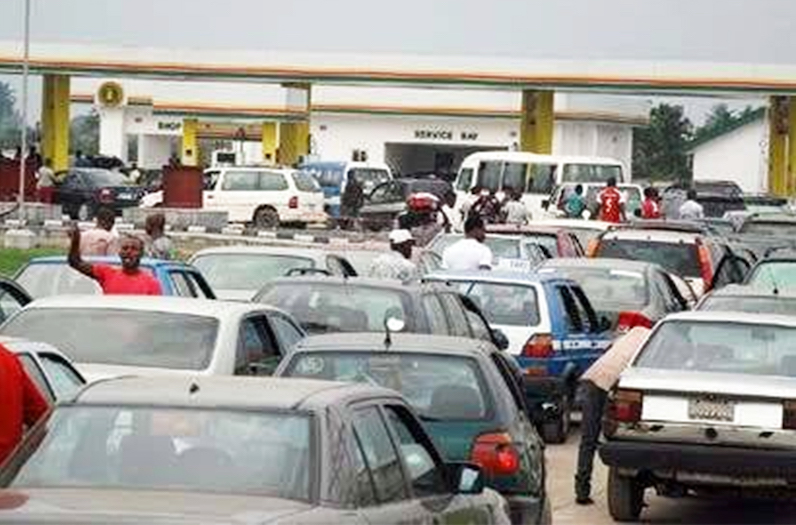 Again, Nigerians are at the receiving end of the current fuel scarcity exacerbated by the disagreement between the federal government and fuel marketers over the appropriate pricing for petrol, Festus Akanbi  reports

Throughout last week, it was a tale of utter frustration, anguish and unmitigated confusion, as commuters were caught between an avoidable showdown between the federal government and fuel marketers over the latter’s agitation for an increase in the pump price of petrol.

While officials of the regulatory agencies were busy chasing black marketers of fuel, who took advantage of the product’s scarcity to hawk fuel openly on major roads in Abuja, for the most of last week, most fuel stations belonging to the Major Oil Marketers Association of Nigeria (MOMAN) and Independent Petroleum Marketers Association of Nigeria (IPMAN), were shut, while a handful that sold the product dispensed from few pumps.

Capturing the pains of the Nigerian people, a political economist, Mr Jide Ojo pointed out that the problem of fuel scarcity would automatically lead to a high cost of living during a period when many Nigerians were groping for survival.

“The implications of this sustained and protracted fuel scarcity are numerous. It has led to a hike in the cost of living and cost of doing business as transport fare has increased by over 100 per cent. Food prices have similarly shot up due to the rising cost of transportation. A lot of productive man-hours are lost to queuing for petrol at the fueling stations. In the course of this scarcity, many vehicle engines have been damaged by fuel purchased from unwholesome black marketers whose sole aim is super-profit.”

Nigeria consumes an estimated 60 million litres of fuel daily. However, findings showed that by PPMC’s record, marketers loaded as much as 106 million litres per day as of April.

Households across the country were left in the dark for days after the national electricity grid collapsed earlier in the month as a blackout swept the country, affecting everything from hospitals to radio stations and other businesses. Ministry of Power had blamed the blackouts on faulty infrastructure, acts of vandalism against oil installations and disruptions to gas and water supply to power plants across the country.

Observers said the current energy crisis in Nigeria is worsened by the abysmal performance of the power sector despite the claims by the authorities that over $3.2 billion had been disbursed to boost power to Nigerians in the last five years.

Governor of the Central Bank, Mr Godwin Emefiele, said the monies were disbursed to electricity generating and distribution companies to buy equipment, and meters and also improve the electricity supply in the country.

The seemingly endless energy crisis was coming at a period of heightened inflation, with analysts saying the common man would be worse off. Nigeria’s inflation rose to 16.82 per cent in April 2022, following a similar uptick recorded in the previous month as a result of the increase in energy and food prices. This represents the highest rate recorded since August 2021.

Ukoha said the conflict between Russia and Ukraine had led to an increment in the cost of diesel, which was a critical product used in transporting petroleum products from the depots to the retail outlets.

IPMAN had on Monday advised its members to adjust the pump price of petrol to a minimum of N180 per litre.

The marketers had said the move was necessitated by the increment in the ex-depot price of petrol by some private depots where they were buying the product from.

However, beyond the feeble attempts by the various agencies of government to stave off the fuel scarcity, petroleum marketers are decrying the prolonged difficulty to load from NNPC depots, which has forced them to depend on private depots that equally impose additional charges.

With additional charges from depots, marketers are decrying the cost of lifting products from depots, alleging that it is no longer sustainable to sell petrol at N165 per litre, despite a running subsidy, while subtly making moves to push the price to N180 per litre.

Reports have it that the Nigerian National Petroleum Company Limited’s (NNPC) Atlas Cove facility, which supplies petrol to several depots, including Ibadan, Ilorin, Ejigbo and Mosinmi, has been down, forcing the country to rely on some private depots. Presently, marketers depend on private depots along Apapa, Abule-Ado and the Lekki Free Trade zones in Lagos

As the brickbats between the government and the marketers continue, findings showed that the majority of the filling stations have unofficially increased the cost of fuel from N165 per litre to N200. They maintained that they are not certain at what cost they would get the commodity when it is eventually available at the depots.

In all this, the federal government says the fixed pump price of petrol remains N165 per litre as stipulated in the petroleum product pricing template.

The government also advised Nigerians against panic buying, saying that the country currently had over 2 billion litres of petrol in various depots.

This was made known by officials of the Nigerian Midstream and Downstream Petroleum Regulatory Authority, the Nigerian National Petroleum Company Ltd., and the Pipelines and Product Marketing Company after visiting jetties in Apapa, Lagos.

In its response, the Nigerian Association of Road Transport Owners (NARTO) explained that although the President approved the upward review of the transportation claim, the new rate has yet to take effect, forcing haulage companies to park their vehicles instead of incurring losses due to the high cost of diesel.

With the electricity situation going from bad to worse, marketers said most retail outlets are also shutting down due to the high cost of running power generating sets.

What Happens to NNPC Depots?

“Our members are registered to load with Pipelines Products Marketing Company (PPMC), but since December last year, not a litre has been lifted at the NNPC’s satellite depots in Ejigbo. We have tickets that have been paid for amounting to over a billion naira as far back as October last year and as we speak, these tickets have not been loaded, meaning that PPMC is holding on to our money,” an official of IPMAN stated last week on condition of anonymity.

“These are funds we are supposed to use to run our businesses. We are businessmen, we take bank loans and now we are paying for money that we are not using,” he explained.

He pointed out that the immediate challenge to its members is the inability to load from NNPC depots, saying that the only option was to depend on private depots along Apapa, Abule Ado and the Lekki Free Trade zones, most of which he said have increased their ex-depot price to a level no longer sustainable for its members to sell at N165 per litre.

The shortage of refining capacity at existing oil refineries is the main driver of Nigeria’s fuel crisis, which hampers the socio-economic development of the country. It places a high subsidy burden on the government and has long made Nigeria dependent on imported petroleum products.

Given the report on the complexity of the process of oil lifting at the NNPC depots as relayed by marketers, analysts said the federal government may not have been getting correct information about the situation of things. This is why some Nigerians find it difficult to believe the assurance by the regulatory authorities that the issue of fuel scarcity would be effectively tackled.

The federal government has been under serious criticism for continuing with the controversial policy on subsidies, which the World Bank and the International Monetary Fund (IMF) described as unsustainable. Already, Nigerians are paying heavily for the policy in terms of the dip in revenue being shared by the three tiers of government.

For instance, in January this year the NNPC, which handles the subsidy arrangement, withheld over N758 billion in the first quarter of 2022 as analysts said that the largely opaque long-running petrol subsidy, will see the country spend close to a quarter, that is N4 trillion, of its entire budget of roughly N17 trillion this year on the major subsidy cost centre.

Therefore, as the federal government and the fuel marketers continue with their negotiation, one hopes both parties will arrive at a quick and agreeable solution in the interest of the Nigerian people who are currently buffeted by some unfavourable developments in the nation’s economy.