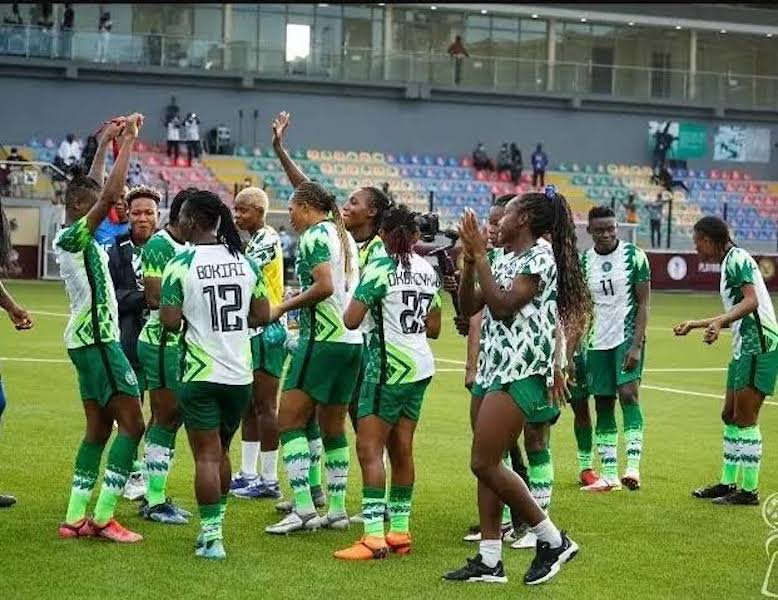 Multiple African Footballer of the Year winner and Super Falcons’ forward, Asisat Oshoala, has said that the senior Nigerian side is looking beyond facing title rivals South Africa at this year’s Women’s Africa Cup of Nations (WAFCON) in Morocco.

The record nine-time African champions will open their 2022 WAFCON campaign just as they ended the last edition against 2018 runners-up Banyana Banyana, having been pitted in Group C, alongside Botswana and Burundi.

The Super Falcons have bowed twice in their last three meetings with the South African team since 2018 but the Barcelona star insists her side is underestimating no side, including Desiree Ellis’ team in their quest for another record-extending 10th continental crown.

“I don’t think the opening game is a decider of the tournament and by the way, it’s not only South Africa we will be facing. It’s a tournament,” Oshoala told CAFOnline.comat the weekend.

“We are not going to be seated talking tough about just one team (South Africa). Obviously, they are a very strong team, a very competitive one as well. Maybe the mind-set of our team and theirs may not be the same, but we have the likes of Cameroon, Morocco, and other great teams in Africa to face.

“We are just basically focused on working on ourselves and we are not so bothered about playing South Africa. When we get to the phase of playing them, we will cross it.”

Despite an injury-hit season, Oshoala won Spain’s Pichichi prize with 20 goals, becoming the first African woman to do so and second African after Cameroon’s Samuel Eto’o with Barcelona.

Ahead of her fifth WAFCON appearance, the four-time African Women’s Player of the Year is upbeat about replicating her Barcelona’s goal scoring impact for Nigeria in Morocco, while opening up on her personal and Super Falcons’ ambitions.

“I think it’s been a rollercoaster of different emotions. I have had good times and bad times, with injuries and all of that. It is just a mixed feeling for me this season,” the 2014 WAFCON best player and 2016 top scorer, continued.

“As usual, i’m in the competition mode, i’m excited, working hard for the tournament, after couple of years and after being cancelled the last time (2020), we are set for the big one again

“First of all, I think we need to understand football, talking about shifting focus and replicating the same performances, I am always ready to give 100 per cent whenever I am given the opportunity to play. I am in a positive mood going into the tournament.

The Super Falcons began final preparation in Abuja on Wednesday, June 15 and are scheduled to face South Africa in their tournament’s opening match at Prince Moulay Hassan Stadium in Rabat on July 4.

In a related development, Botswana, who will face Nigeria’s Super Falcons on 7 July in the Match- day 2 schedule of the tournament yesterday announced their final squad to the tournament.

Coach Gaoletlhoo Nkutlwisang has named her final 24-woman squad as the 2 July kick of date for the tournament approaches.