Heartbreaks for Peru as Australia Pick Ticket in Shootouts 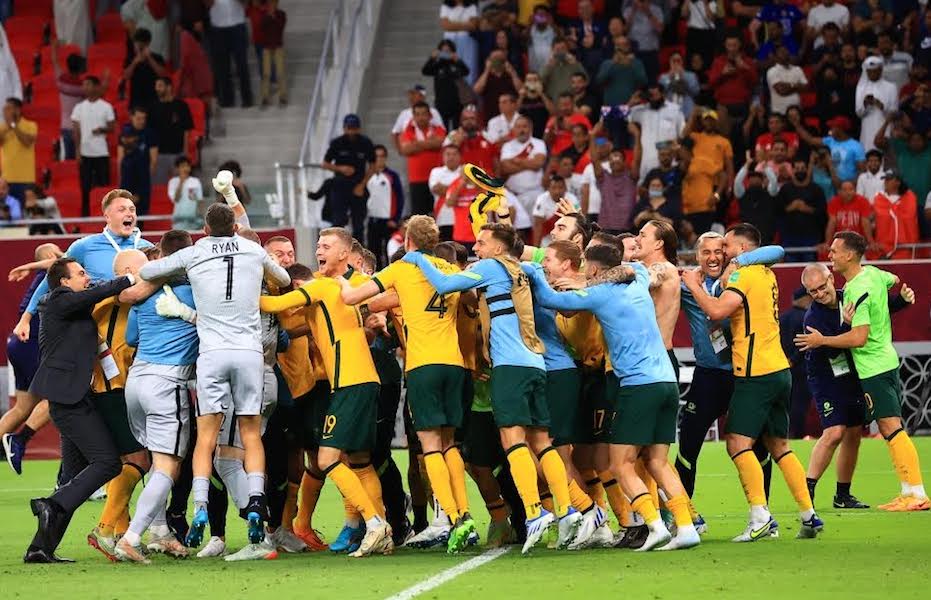 Late Monday night, Peru’s dream of reaching the finals were shattered in a nail-biting penalty shootouts against Australia as the Socceroos sneaked into Qatar 2022  World Cup with 5-4 victory at the Ahmed bin Ali Stadium in Doha.

Regulation and extra time deadlocked goalless for the game to drag into penalty shootouts.

But with barely minutes for the added time to end for the shootout, Australia Coach, Graham Arnold, brought in Sydney FC keeper, Andrew Redmayne to replace Mat Ryan for his third cap.

That gamble proved decisive as Redmayne who danced on the line for each kick in a bid to confuse the Peruvians, ended up making Luis Advincula to hit the post while also saving Alex Valera’s final penalty kick for Peru.

The South Americans who came to Doha in their thousands electrified the Ahmad bin Ali Stadium in Al Rayyan with their drummings and singing. They gave 100 per cent support to their team but ended up not making it as the 31st team to qualify for Qatar 2022.

Speaking at the post match conference, Redmayne insisted he was not the hero of the night  but the glory of qualification goes to the entire team.

“I’m no hero, I just played my role like everyone did tonight,” observed the goalkeeper who some of the Peruvians called a ‘kangaroo’ due to his unorthodox manner of dancing on the goal line.

He however admitted that he had perfected his tactics in training in the eventuality of the game dragging into shootouts.

“This idea was floated pre-selection that this might eventuate in these kind of circumstances and for the two or three weeks we’ve been here (in Qatar), I’ve kind of had that in my mind,”  Redmayne revealed.

“I’ve been working on a few things in training but at the end of the day it’s a flip of the coin, it’s either right or left.”

Despite the game played in excess of 30C, the main bowl of the Ahmed bin Ali Stadium gave winter feelings to the thousands of fans inside the facility. The air conditioned cooling system installed in all the stadiums to host the World Cup matches in Qatar, worked as planned. At some point, some of the traveling fans on both sides had to bring out their jackets to keep warm from the cooling effect.

Today at the same venue, Costa Rica will be aiming to qualify for a third successive World Cup as well as pick the last 32nd slot to complete the Qatar 2022 list of countries for the global football fiesta. They have New Zealand to contend with.

The match pits the fourth- placed finishers in the CONCACAF qualifying group (Costa Rica) against the top team in the Oceania confederation (New Zealand) and the winners will play in Group E at the finals in Qatar along with Germany, Japan and Spain.

Costa Rica reached the quarterfinals in Brazil eight years ago and having had substantially more competitive matches over the last four years will be favourites to advance.

Since the last World Cup, they have played 30 competitive games compared with five for New Zealand which have all been against low-ranked Pacific island nations.

“Costa Rica have played a lot together and have a lot of caps,” said New Zealand coach Danny Hay, whose side played Peru and Oman in warm-up matches over the last week.

“We don’t really get enough opportunity to test ourselves against top quality opposition.”

Hay admitted the behind closed doors draw with Oman on Friday was not the greatest performance by his team.

“But that said, I think everybody’s got half an eye, if not a full eye, if not two eyes on Costa Rica,” he added.

Costa Rica defender Francisco Calvo warned his side will need to be wary of complacency.

“We have to be focused for the 90 minutes, because they shoot from wherever they can. We’ll have to defend to the death and keep Chris Wood under control,” he told reporters here in Doha. Newcastle United striker Wood is the Kiwis’ key attacker.

New Zealand, who competed at the 1982 and 2010 World Cups and lost out in playoffs for the two last tournaments, have concerns over the fitness of captain Winston Reid but Hay said he expected the former West Ham United central defender to play.