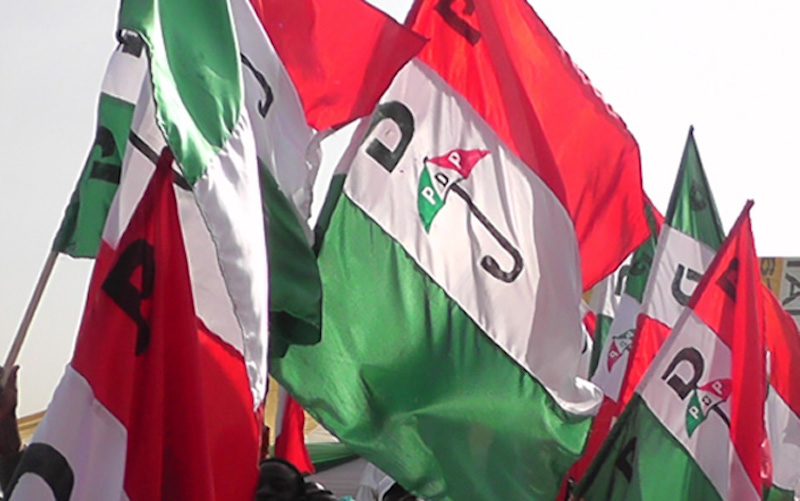 The Peoples Democratic Party (PDP), yesterday, in many states of the federation, elected its governorship standard bearers for the 2023 general election.

While the exercise was hitch-free and smooth in some states, some had challenges that stalled the process, while a few other states suspended the exercise.

Below are the situation reports from some of the states across the country.

In Oyo State, Governor, Seyi Makinde, emerged the standard-bearer of the PDP for re-election in 2023.

He emerged the winner at the governorship primary election held at the Lekan Salami Sports Complex, Adamasingba, Ibadan, after polling a total of 1,040 votes out of the accredited votes of 1,048, to beat Hazeem Gbolarumi, who scored two votes.

Returning officer and chairman of the Oyo State PDP Governorship Congress Panel, Senator Ben Obi, who was represented by the Panel’s Secretary, Alhaji Abdullahi Mai Basira, said the total votes cast were 1,048, with six of the votes voided.

Sheriff Oborevwori, Speaker of the Delta State House of Assembly and the much-touted anointed aspirant of Governor Ifeanyi Okowa, emerged candidate of the party for the state, after scoring 590 votes.

The Chairman of the PDP election panel, Ndubuisi Nwobu, announced the results at the end of the exercise, held in the Stephen Keshi Stadium Asaba on Wednesday.

The 590 votes of Oborevwori, who hailed from Okpe area of Delta Central Senatorial District, signified 71.4 per cent of the total 821 valid votes cast, with three votes declared invalid.

In the exercise that was held at the OOPL, Adebutu scored 715 votes to clinch the ticket of the party, while Jimi Lawal and Segun Sowunmi, did not score any vote.

In the exercise conducted at the Iwe Iroyin, Sowunmi, scored 554 votes to defeat Jimi Lawal, who scored 30 votes and Adebutu, who scored 15 votes.

However, the primary that produced Adebutu, was temporarily put on hold for almost an hour, when disagreement, ensued among supporters of Lawal and Adebutu, over the delegates list.

Lawal’s  supporters had alleged that the list that was being used for accreditation, was different from the one that was generated from the results of state delegate election that was conducted earlier in the month.

The disagreement, caused pandemonium which, forced the armed security men at the venue to scare the hoodlums that wanted to disrupt the process. The situation, also forced the officials of the Independent National Electoral Commission (INEC), to rush out of the venue.

Scared by the situation, Adebutu’s opponent, left the venue in annoyance.

But few minutes after he left, the situation was brought under control and accreditation of delegates continued till late in the night, after which Adebutu emerged winner. produced the results.

Result of the PDP governorship primary in Kaduna State has been delayed following the late commencement of the process.

Accreditation of delegates from the 23 Local Government Area started at about 4: 30pm, but delegates from only10 LGAs had been accredited and allowed into the Gymnasium Hall at the Ahmadu Bello Stadium (ABS), venue of the election.

The delegates were screened at the nearby Access Hotel and Nevilla Hotel, after which they were escorted in a bus to the venue by the police.

A total of 788 delegates were expected to elect the party’s standard bearer from six aspirants.

The election was expected to continue into late in the night.

A former of the House of Representatives, Hon. David Ombugadu, was yesterday declared winner of the Nasarawa State PDP governorship primary.

Chairman of the Nasarawa State PDP electoral committee, Mr Bature Musa, declared Ombugadu winner of the primary election held at the headquarters of Nasarawa Local Government Area of the state.

Gombe State PDP has elected Mohammed Jibrin Barde as its governorship candidate for the 2023 election.

He defeated his closest rival, Jamilu Isiyaku Gwamna, with 160 votes against 119.

A total of 328 delegates cast votes during the election while two others were barred for turning up at the venue late after the completion of delegates’ accreditation.

A former Secretary to the Bauchi State Government, Ibrahim Kashim, has emerged candidate of the PDP in the state. He was the only candidate.

State Resident Electoral Commissioner, Ibrahim Abdullahi, while supervising the exercise held in the state capital, said the commission has made electoral guidelines available to political parties, electorate and all the relevant stakeholders to avoid irregularities.

He commended the party for the orderly conduct of the election, in which over 600 delegates voted.

THISDAY gathered that some aspirants like Senator Ahmed Salihu Ohembe and former House of Representatives member, Abulkareem Salihu, had earlier stepped down for one reason or the other, and paved the way for the only amazon  among them.

The duo cited reasons including court issues for their refusal to participate in the primary.

Luke, currently a member representing Etinan Federal Constituency in the House of Representatives, and Chairman, Committee on Judiciary, in a statement said he took the decision after consulting with his Amazing Grace Campaign Team.

On his part, Akpan also said his inability to participate in the primary was in adherence to court order.

The Visioner, Lagos4Lagos, Olajide Adediran, popularly known as Jandor, has clinched the governorship ticket of the PDP in Lagos State.

He emerged winner with 679 votes to defeat David Kolawole Vaughan, popularly known as Dakova, who had 20 votes out of the 709 accredited delegates at the party primary conducted at the Haven Centre, Ikeja. Ten votes were voided.

The two factions of the PDP in Kano State, yesterday, held parallel congresses to elect their choice governorship candidates.

It was gathered that the panel, set up by the national leadership of the party to conduct the party primary election, were also divided along the factions.

While the Alhaji Shehu Wada Sagagi group held its own at the Lugard road in the metropolis, loyalists of a former Minister of Foreign Affairs, Alhaji Aminu Wali, gathered at the Sani Abacha youth center along Madobi road.

But in spite of the division, the election was yet to commence at the Sani Abacha Center at the time of filling this story.

A former National Commissioner, Revenue and Fiscal Mobilisation Commission, Alhaji Shuaib Yahman Abdullahi, has emerged the governorship candidate of the PDP in Kwara State ahead of 2023 polls.

The exercise was held at the Arca Center event hall, Ilorin amidst tight security and attended by 574 delegates and some elders of the party.

One of the sons of a former governor of Jigawa State, Alhaji Mustapha Sule Lamido, has emerged the gubernatorial standard bearer of PDP in the state, at a primary election held at Dutse stadium yesterday.

Announcing the result, Chairman of the Electoral Panel, Mr Isah Ahmed, said Mustapha Sule-Lamido scored 829 votes out of the 832 votes cast while the second candidate, who is a former minister of work, Alhaji Saleh Shehu, did not score a single vote.

Ahmed announced that three votes were invalid and subsequently declared Sule-Lamido winner, having scored the higher votes cast by delegates.

An industrialist and former Commissioner for Finance in Enugu State, Peter Mbah, won the governorship ticket of the PDP in the state.

Mbah, who is from Owoh in Nkanu East Local Government Area of Enugu State, won the election, held at the Nnamdi Azikiwe Stadium, Enugu, with 790 votes out of the 807 votes to defeat his closest opponent, Hon. Chijioke Edeoga, who scored 9 votes.

Prior to the commencement of voting, eight governorship aspirants out of the 17 contestants stepped down for Mbah and asked delegates, who wanted to vote for them to cast their votes for him.

Sokoto State chapter of the PDP has elected a former Secretary to the State Government, Sa-aidu Umar, has its governorship candidate for the 2023 polls.

According to the chairman,  electoral committee, Dr Tom Zakari, said the other candidates voluntarily withdrew from the race hence the need for the 755 delegates to affirm the result.

He, however, noted that 695 delegates affirmed the result while 60 votes were voided, adding that, with the power conferred on him as the chairman of PDP electoral committee, he declared Sa’adu Umar as the gubernatorial candidate of PDP in the state.

In another development the former Minister of water resources and a PDP aspirant in the election, Murthar Shagari, has announced his exit from the party .Shagari hinged his dumping of the party on lack of transparency and democratic tenets in the primary election.