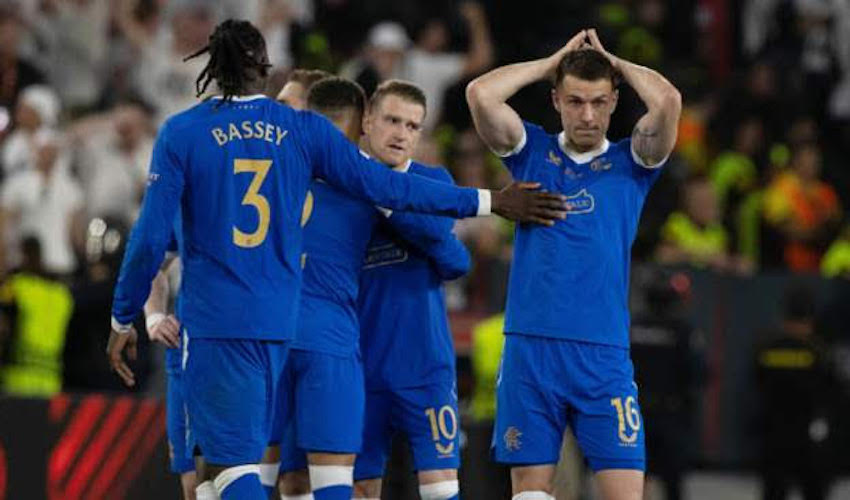 The dream of Nigeria’s trio of Calvin Bassey, Joe Aribo and Leon Balogun to lay their hands on the UEFA Europa League trophy crashed last night after former Arsenal player, Aaron Ramsey missed his spot kick in the shootouts that ensued after regulation and extra time deadlocked one-all.

Super Eagles midfielder, Joseph Ayodele-Aribo had fired the Scottish giants into the lead in the 59th minute.

Aribo cashed on a misjudged header from Frankfurt’s Djibril Sow and chased defender Tuta in a tangle which allowed the Nigerian international ,a free run on goal. He didn’t strike his shot cleanly but it rolled past the diving Kevin Trapp in goal for the German club.

Some of the  over 100,000 Rangers fans inside the Ramon Sanchez Pizjuan Stadium and those outside in Seville went wild in celebration of 50 years European Cup jinx about to be broken.

But that was not to be as Frankfurt fought back in the 69th minute as Filip Kostic drilled a cross from the left and Connor Goldson allowed it run by him as Rafael Borre slides in before  Bassey could get there.

Borre rammed the ball home from six yards for the equalizer and dragged the game into extra time. With no clear winner in sight after 120 minutes of football showpiece in which Bassey stood out in five-star performance, the game winner had to be decided in penalty shootouts. The third Nigerian Leon Balogun was an unused substitute.

Ramsey’s poor kick ruined the night for the Gers who rightly deserved to have their hands on the trophy to end 50 years wait for another European competition honour. It was indeed heartbreaking as Rangers’ players crumpled to their feet as Frankfurt’s bench spewed on to the pitch as they heralded in their own second European trophy.